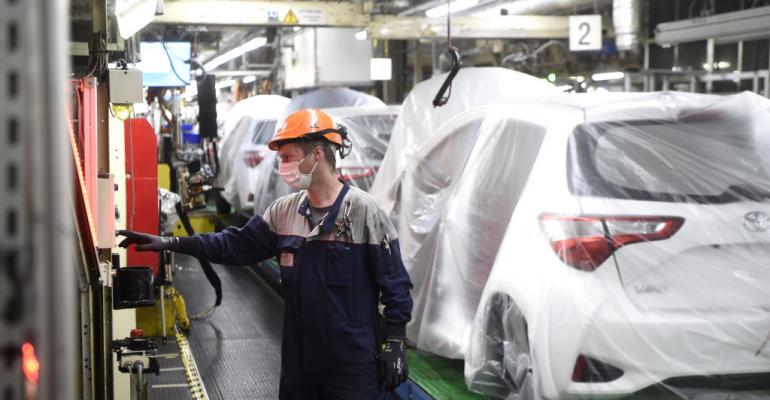 The company had halted production at the plants due to impacts from a cyberattack against a parts supplier.

(Bloomberg) -- Toyota Motor Corp. will resume work at all its Japanese factories Wednesday after a one-day shutdown, limiting the fallout from a cyberattack on one if its key suppliers.

The world’s top auto producer will resume operations at all 14 plants in its home country on Wednesday, Toyota said in a statement Tuesday. It had halted production at the plants due to impacts from a cyberattack against parts supplier Kojima Press Industry Co.

Kojima Press confirmed Tuesday its server was subject to a cyberattack over the weekend. It subsequently shut down the server and is aiming to restore its system from March 2, a spokesperson for the company said late Monday. A spokeswoman for Toyota said Tuesday it will take a week or two for the company to sort out the Kojima Press hack. In the meantime, Toyota is using a workaround to get operations back up and running, she said.

Toyota’s Japan production stoppage -- though short in length -- is a setback in the automaker’s efforts to recover production lost in recent months to chip shortages and Covid-related disruptions. The supply snags prompted Toyota last month to cut its output goal for the fiscal year through March to 8.5 million vehicles, from a previous target of 9 million.

The one-day domestic production stoppage likely impacted around 13,000-vehicles worth of production, representing about 5% of output for the month of February.

Toyota had planned to produce 950,000 vehicles in March, up from the 843,393 it produced a year earlier. In that sense, it will be very difficult for Toyota to increase production further to make up for units lost due to supplier network disruptions, said Bloomberg Intelligence analyst Tatsuo Yoshida.

Still, the number of units lost to the recent network disturbances remains “very small” relative to Toyota’s total annual output and the amount it lost last year when the spread of Covid-19 in Southeast Asia caused it to slash production, Yoshida said. Toyota should be able to recover recent losses in April or May, he added.

Kojima Press derives most of its sales from the Toyota Group, so there’s also likely to be little impact from the cyberattack on other Japanese automakers including Honda Motor Co. and Nissan Motor Co., according to a report from Mitsubishi UFJ Morgan Stanley Securities Co. That said, the events illustrate that “strengthening cybersecurity measures for the entirety of supply chains will be an urgent task for the entire auto industry,” according to the report.