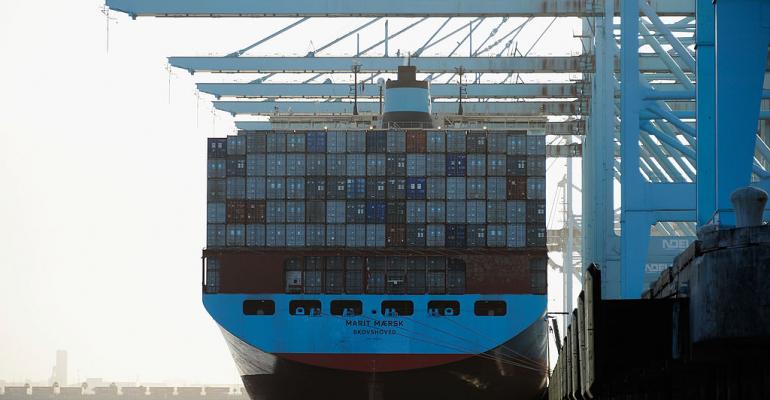 Maersk Says June Cyberattack Will Cost It up to $300M

Christian Wienberg (Bloomberg) — A.P. Moller-Maersk A/S said a cyberattack that hit the owner of the world’s biggest container shipping company at the end of June will wipe as much as $300 million off profits in the third quarter.The announcement was made in connection with second-quarter earnings, which showed Maersk missed analyst estimates after taking a writedown at the tankers unit that’s part of the energy business management has said it wants to get rid of.

Frode Morkedal, the managing director of Clarksons Platou Securities, said the report was “slightly on the negative side, but we find solace in their positive market comments,” in a note to clients. Of the 31 Maersk analysts tracked by Bloomberg, 15 are telling investors to buy the stock, 12 suggest holding on to it, and four say clients are better off selling.

David Kerstens, an equity analyst at Jefferies, said the fact that Maersk Line reported its first profit in five quarters shows that “fundamentals in container shipping continue to improve,” according to a note. Kerstens is among analysts advising clients to buy. Clarksons has a neutral rating on the share.

Ebit was $302 million in the second quarter, missing the average estimate of $896 million in a Bloomberg survey of 10 analysts Maersk had a net loss of $269 million, when analysts had expected a profit Revenue was $9.60 billion, in line with estimates The June cyberattack will cut about $200-300 million off Maersk’s results, it said The company kept its outlook for the full year Profit was hurt by a $732 million impairment due to lower asset valuations in Maersk Tankers and “a few commercially challenged” terminals in the APM unit, it saidMaersk was among a number of multinational companies that in June was hit by a cyberattack. Its IT systems were disabled, preventing the shipping line from taking new orders for several days. Maersk said on Wednesday it kept its outlook despite the costs of the cyberattack, as the container shipping market improves.

“These system shutdowns resulted in significant business interruption during the shutdown period,” Maersk said in the report. The financial impact in the second quarter was “limited,” but “the impact in the third quarter is larger, due to temporary lost revenue in July,” it said. “While the businesses were significantly affected by this cyberattack, no data breach or data loss to third-parties has occurred.”

Aside from the cyberattack, Maersk said the industry outlook was healthy. After a decade dominated by overcapacity, the container industry is now benefiting from higher freight rates as some of the biggest companies swallow up smaller rivals.

Maersk said “the improvement in market fundamentals in past quarters has started to reflect in the freight rate,” which it said was up 22 percent from a year earlier. Freight rates increased by 36 percent on East-West trades and 17 percent on North-South trades, it said.

The company has given itself until the end of 2018 to come up with a plan to separate its energy business, which includes Maersk Oil and Maersk Drilling. The conglomerate wants to focus on its transport division, which, besides Maersk Line, includes port operator APM Terminals.