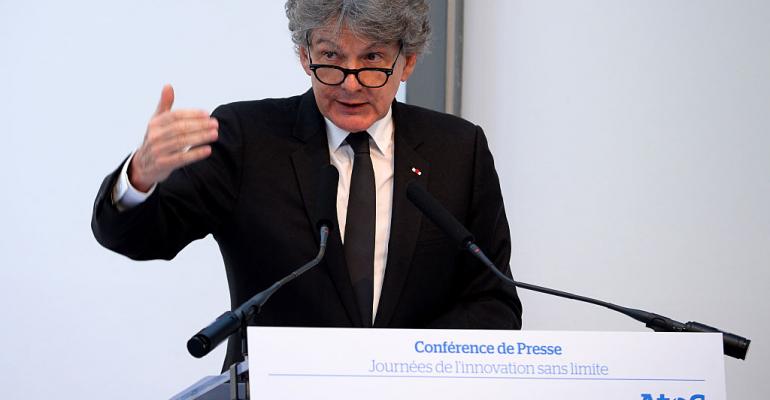 European Companies Look to Build Their Own Walls in the Cloud

“We’re building a sanctuary, a secure space. It’s a solution to protect our sensitive data.’’

Marie Mawad and Helene Fouquet (Bloomberg) -- Using code rather than concrete, European companies are busy building walls to protect their data, and are being encouraged by local politicians concerned about threats to their sovereignty.

France’s biggest supplier of drinking water is one example. Before switching to Google’s cloud-based office software, Veolia Environnement SA first hired cybersecurity company Atos SE to handle the encryption of its data before it reached the Alphabet Inc.-owned company’s servers.

Geopolitical tensions and trade wars are making European politicians cautious about domestic champions ceding control of their data to technology suppliers from the U.S. or China, fearing that providers could deny access to critical information about customers or production, or serve as a venue for rogue agents.

Agnes Pannier-Runacher, France’s deputy economy minister, said in an interview that businesses relinquishing control of their data was “a systemic risk” to the competitiveness and sovereignty of an economy.

Firms are increasingly migrating their data into cloud-based ecosystems -- an industry Gartner estimates will be worth about $214 billion in 2019, and one dominated by American and Chinese giants such as Amazon.com.com, Microsoft Corp., and Alibaba Group Holding Ltd.

Germany’s central bank also recently warned the region’s banking sector that the move to shifting data on the cloud will make the industry harder to monitor.

“For many companies, data is a strategic question,” Pannier-Runacher said. “It’s okay to have certain data out of reach in a functioning multilateral system; it becomes problematic in a unilateral system where one side can put pressure and cut access.”

Under the Trump Administration’s Cloud Act (or the “Clarifying Lawful Overseas Use of Data Act”) that was signed last year, all U.S. cloud providers can be ordered to provide local authorities data stored on their servers no matter where that data is physically stored. A similar concept has been enshrined in Chinese law since 2017, in which information of citizens must be stored in-country and accessible on demand to the authorities.

As a result, European encryption specialists like Atos and Thales have been touting their home-grown history as a unique selling point, when competing with U.S. rivals such as Salesforce.com Inc. Amazon and others. Smaller European-grown cloud providers like Gigas Hosting SA in Spain and OVH Groupe SAS in France – while still dwarfs compared to their U.S. rivals – have not been shy in making the point that English isn’t their first language

“Veolia wants to maintain control and sovereignty over its data, however secure cloud solutions may be,’’ said Pascal Dalla-Torre, the company’s cybersecurity officer. “We’re building a sanctuary, a secure space. It’s a solution to protect our sensitive data.’’

Atos says it has a pipeline of 1 billion euros ($1.1 billion) under negotiations for security contracts similar to the one it signed with Veolia.

“European businesses want Google’s technology, but with the right protections -- that’s one of the most common demands we have from customers today,” Atos Chairman and Chief Executive Officer Thierry Breton said in an interview.

Europe is not the only region looking to promote its local providers. Boosted in part by escalating U.S. tensions, Beijing-based database and cloud provider PingCAP is winning over local tech giants, startups and financial institutions to its enterprise software.

U.S. companies yet to see any serious knock-on effect. Oracle Corp. Recently closed at a record high amid positive signs in its transition to cloud-based computing, while Salesforce has been busy inking $15.3 billion deals.

“The pace of innovation of hyper-scalers is so high that European companies must use them to stay in the game,” Carla Arend, researcher IDC’s lead cloud analyst, said. "But the regulatory environment and global security risks are certainly part of the concerns that Europeans are taking into account.”

--With assistance from Fabio Benedetti-Valentini and Gregory Viscusi.