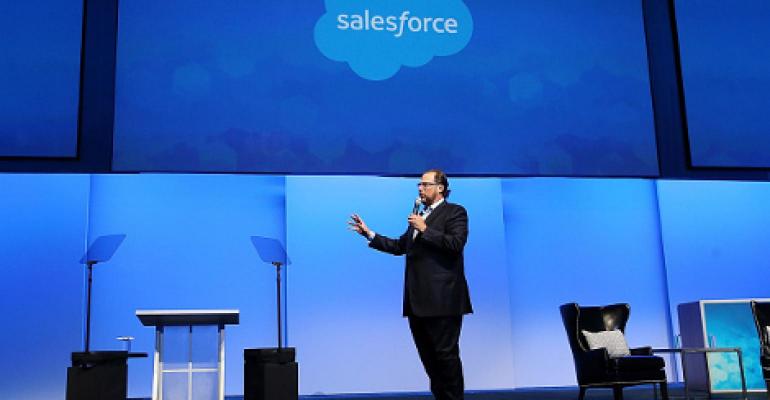 Salesforce.com Inc. unveiled a blockchain service in a bid to boost revenue and keep up with peers in digital ledgers, joining a growing list of companies that have sought to harness the emerging technology.

(Bloomberg) -- Salesforce.com Inc. unveiled a blockchain service in a bid to boost revenue and keep up with peers in digital ledgers, joining a growing list of companies that have sought to harness the emerging technology.

The blockchain platform will let clients create networks to securely transfer data with partners and other third parties, the San Francisco-based company said Wednesday in a statement. The “low-code” product will integrate with Salesforce’s Lightning developer platform.

Salesforce has been ramping up its blockchain efforts since last year. Co-Chief Executive Officer Marc Benioff said in March 2018 that he hoped to integrate “blockchain and cryptocurrencies” into Salesforce’s platform by September of last year. The market leader in customer relationship software last year joined the Blockchain in Transport Alliance, which is focused on improving supply chains.

“This felt like a unique opportunity for us to say, how can we let customers work with partners in a distributed and secure way,” Bret Taylor, Salesforce’s chief product officer, said Wednesday during the company’s annual developer conference in San Francisco. He said he hopes that Salesforce customers experiment with different ways to use the technology.

Blockchain is a database with a unique feature that ensures the trustworthiness of transactions. It can use thousands or millions of computers to verify transactions, and this structure eliminates risks that come with information being held centrally by a single entity.

While hype around cryptocurrencies has cooled, cloud-computing companies have rushed to develop blockchain solutions. International Business Machines Corp. already has more than 1,000 staffers assigned to blockchain-related projects, and the company works with many consortia to help them use digital ledgers for projects such as supply-chain tracking. The world’s largest software maker, Microsoft Corp., unveiled a blockchain service this month that lets users create and manage digital ledgers with a few clicks. Oracle Corp. earlier this year added new features to its platform to speed up development and deployment of blockchain applications.

Rather than develop the software from scratch, Salesforce built its blockchain platform on Hyperledger, open-source software launched in 2016 whose development has been led by the likes of IBM. Hyperledger is the fastest-growing project among more than 70 open-source organizations the Linux Foundation has launched.

Salesforce has a lot of catching up to do, particularly in recruiting important, large clients. IBM, for example, is already working on blockchain projects with companies such as Maersk and Walmart Inc.