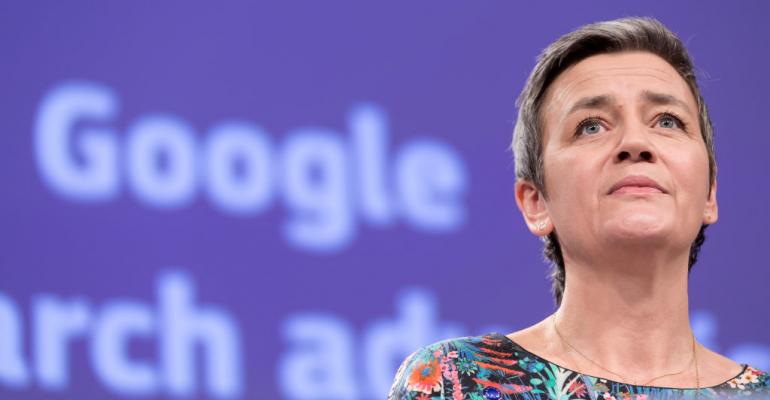 EU antitrust chief: “What they’re sucking up is not rubbish, it is gold.”

“Platforms like Google and Facebook, they collect data from consumers, not just the posts we like on Facebook or the searches we make on Google, but much more unexpected things, like the Onavo VPN app” which sent Facebook information on other apps and websites accessed by users, Vestager told a conference at the German foreign ministry in Berlin on Tuesday.

Fresh from fining Google billions of euros, Vestager has been probing Facebook Inc.’s services and Libra cryptocurrency and investigating how Amazon.com Inc. handles sellers on its site. Internet firms have “an obvious temptation to adjust the way the platform works to favor their own services ahead of others,” she said.

“We’re looking now at whether the same thing may have happened to other parts of Google’s business, like the job-search business known as Google for Jobs,” Vestager said, weeks after the EU surveyed recruitment sites about the Alphabet Inc. business.

“The way these companies collect and use data can undermine competition,” she said. They are “like robot vacuum cleaners” and “are working their way into every corner of our digital world and sucking up data.”

“What they’re sucking up is not rubbish, it is gold.”