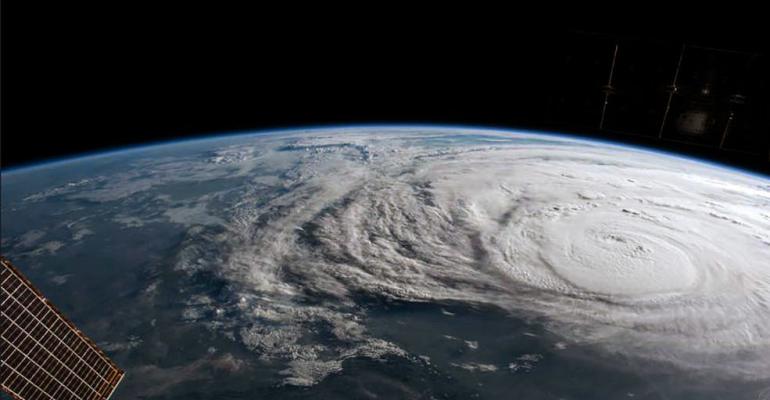 But now scientists are warning that their precision tracking of hurricanes could be disrupted by signals from the new generation of wireless networks known as 5G.

But now scientists are warning that their precision tracking of hurricanes could be disrupted by signals from the new generation of wireless networks known as 5G that will soon roll out across the U.S. In one test that mimicked interference, Sandy was incorrectly forecast to head out to sea.

At currently proposed 5G power levels, satellites may have trouble reading natural signals given off by water vapor. That could set back forecast accuracy to levels last seen around 1980, said Neil Jacobs, head of the National Oceanic and Atmospheric Administration.

“This would result in the reduction of hurricane track forecast lead time by roughly two to three days,” Jacobs told Congress at a hearing earlier this month.

The issue has split the Trump administration, with Commerce Secretary Wilbur Ross, whose agency includes NOAA, warning that critical Earth-science data could be lost. Even the Navy has expressed misgivings. The U.S. Federal Communications Commission, however, went ahead with an auction of spectrum in its drive to advance 5G communications.

The U.S. mobile communications industry, which says it’s investing $275 billion in 5G, scoffs at the notion that forecasts might be degraded. Such predictions amount to “an absurd claim with no science behind it,” according to a May 21 blog post by CTIA Executive Vice President Brad Gillen.

The mobile industry has a direct stake in the airwaves at issue. Already companies have pledged more than $2 billion for rights to use the frequencies, bidding in an auction run by the FCC that concluded May 28, with AT&T Inc. and T-Mobile US Inc. winning airwaves rights.

The conflict is an example of growing friction between wireless uses as more airwaves are claimed by 5G, with backing from the FCC and the administration of President Donald Trump, who has called for “freeing up as much wireless spectrum as needed.”

The FCC expects to sell rights to three airwaves swaths in coming months, in addition to two batches that were sold at auction already this year. One of those two, in the band known as 24 GHz, is the sale that drew $2 billion in bids and excited the attention to hurricane and storm forecasts.

Power levels proposed by the FCC could degrade forecast skills by as much as 30%, NOAA’s Jacobs told Congress. After Sandy struck, European forecasters ran a test withholding vapor-sensing data and “the model, which is the most accurate model in the world right now, kept the storm out to sea,” Jacobs said. “It’s incredibly important.”

Ross, the commerce secretary, said in a Feb. 28 letter to the FCC Chairman Ajit Pai, a Trump appointee, that “the current FCC proposal would have a significant negative impact on the transmission of critical Earth science data.”

Instruments aboard satellites sample signals naturally emitted by water molecules, James Bridenstine, the administrator of NASA, the space agency, told a Senate committee on May 14.

“We are sensing passively the energy state of water molecules in the atmosphere,” Bridenstine said. “That is set by physics. We can’t just go to a different part of the spectrum.”

Some lawmakers have called for the FCC to hold off awarding spectrum to the winners of the recent auction.

“We write with a straight-forward request: Don’t allow wireless companies to operate in a 24 GHz band until vital weather forecasting operations are protected,” Senator Ron Wyden, of Oregon, and Senator Maria Cantwell, of Washington, said in a May 13 letter.

The Democratic senators released a U.S. Navy memo that said the FCC’s auction will result in “a probable degradation of weather and ocean models, resulting in increased risk in Safety of Flight and Safety of Navigation.”

Pai, who is pursuing what he calls the 5G FAST plan, declined to delay the auction. He said the sale had been long planned and that the agency had adopted regulations to protect other services.

“The commission’s decisions with respect to spectrum have been and will continue to be based on sound engineering rather than exaggerated and unverified last-minute assertions,” Pai said in a reply to Johnson.

The FCC declined to comment for this story, said Tina Pelkey, a spokeswoman.

The U.S. wants to have a unified position in time for an international conference on radio frequency rules that begins in October in Sharm el-Sheikh, Egypt.

The State Department, which will represent the U.S., is working to reconcile different agencies’ views on interference limits.

“I think there could be an elegant solution here,” Bridenstine, the NASA administrator, said in his Senate testimony. “If the decibel level is low enough then it won’t bleed into” the water-vapor airwaves.

The CTIA is arguing against altering regulations. “Changing the rules now would dramatically reduce the amount of high-band spectrum available for robust 5G services,” Nick Ludlum, a spokesman for the wireless trade group, said in a May 31 blog post.

“Just after the auction it’s really raw to say, I have bad news for you,” Feld said in an interview. The government may decide to leave power levels unchanged, but also be poised to halt deployments if the quality of weather forecasts suffers, he said.

Miffed companies could sue, claiming, “I bought a Ferrari, and I get a Ford Fiesta,” Entner said.