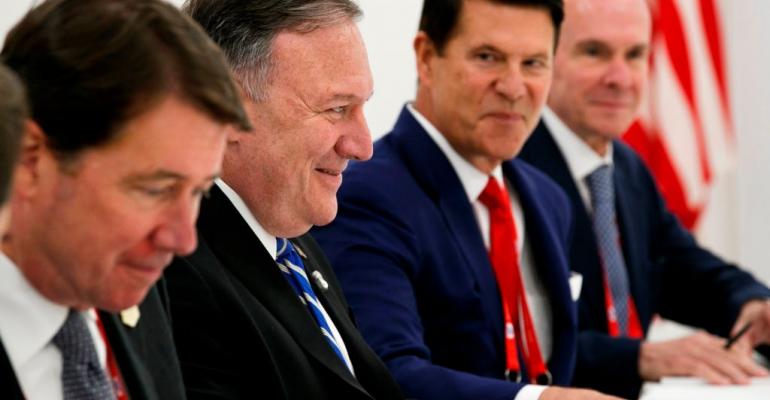 JACQUELYN MARTIN/AFP via Getty Images
(L-R) US Ambassador to Japan William Hagerty, Secretary of State Mike Pompeo, Under Secretary of State for Economic Growth, Energy, and the Environment Keith Krach, and Senior Adviser Michael McKinley attend a meeting with Japanese Foreign Minister Taro Kono during the G20 summit in Osaka on June 28, 2019.
Business>Regulation

Huawei Besieged on New European Front After US Targets Cloud

US officials have been lobbying European lawmakers and industry leaders to use Western companies to build data centers.

Helene Fouquet (Bloomberg) -- Huawei Technologies Co., already getting squeezed out of Europe’s vast market for the next generation of telecom equipment, is under siege in another fast-growing business: cloud computing.

U.S. officials have been lobbying European lawmakers and industry leaders to use Western companies -- while shunning Huawei -- to build data centers and offer infrastructure to handle the growing tide of information.

“Look at this as an extension of that 5G,” Krach said. “Clouds are really important, whether it’s in the service cloud or in data centers themselves. This is a big deal.”

Pressure from Washington affects one of Huawei’s fastest-growing businesses. China’s largest technology corporation by sales has in past years accumulated an impressive roster of clients, including Deutsche Telekom, France’s Orange SA and Spain’s Telefonica SA. It’s now seeking to expand its reach to customers such as oil companies, power grid operators and logistics providers.

While Alibaba Group Holding Ltd. operates a larger cloud business and WeChat-operator Tencent Holdings Ltd. isn’t far behind, Huawei is more vulnerable given the Trump administration has managed to convince some governments in the region to exclude its 5G networking gear. Europe’s cloud infrastructure is a $12.4 billion business that grew 33% this year from 2019, according to market researcher IDC. U.S. players dominate, led by Amazon.com Inc.’s AWS and followed by Microsoft Corp., IBM, Google and Oracle Corp.

“Chinese players like Alibaba and Tencent are not making huge inroads into the European market,” according to IDC’s Carla Arend.

A spokesman for Huawei declined to comment on its European cloud business.

Similar to European telecom firms slowing turning away from Huawei for their 5G infrastructure, U.S. pressure is already working in the cloud. Orange CEO Stephane Richard told analysts in July that the company’s cloud built on a Huawei infrastructure was “likely no longer relevant.”

“Clearly today, the Huawei Cloud infrastructure is not necessarily the one we’re going to be promoting in Europe,” he said. Orange’s Huawei-built cloud is currently used by the European Space Agency and car-marker PSA. Just days before Richard’s call with analysts, Orange signed a cloud deal with Google.

Deutsche Telekom declined to comment on its CEO’s meeting with Krach and its cloud-business plans. The company, whose biggest sales come from its T-Mobile unit in the U.S., has cloud partnerships with Cisco, Microsoft, OVH and Amazon’s AWS. It also has an offer based on Huawei infrastructure called “Open Telekom Cloud” for small and medium-sized companies.

The tide is turning toward trusted 5G vendors and away from Huawei. The world’s leading telecom companies—Telefonica, Orange, Jio, Telstra, and many more—are becoming “Clean Telcos.” They are rejecting doing business with tools of the CCP surveillance state, like Huawei.

“Huawei is losing market share in Europe,” said Jim Lewis, Director of Technology Policy Program at the Center for Strategic and International Studies in Washington, D.C. “I think its brand has been damaged. Their handset sales continue to do well, but in infrastructure they are being squeezed out of the developed world.”

U.S. sanctions have already jeopardized Huawei’s supply chain. A U.S. ban in chip sales to Huawei kicked in Sept. 15, disrupting its wireless, handset and cloud offerings. In 5G, the U.K. has imposed a full ban, while France has devised rules making it riskier for operators to use Huawei equipment, without banning it outright.

Telefonica, which retracted plans to use mainly Huawei for its 5G, sells a cloud offer with the Shenzen company in Spain, Brazil, Argentina and Chile. It also has partnerships with Google, SAP and Microsoft. Krach cited Telefonica as one of the 50 telecom operators committed to the U.S.’s “clean network” plan.

Huawei is far from defeated in Europe. On a rainy day last week, it opened an 8,000-square foot (743 square meters) research center in an upscale Paris neighborhood. Local telecom champion Orange said it will selectively keep parts of Huawei’s infrastructure in its offerings.

But for now, the U.S. is maintaining pressure on its European counterparts.

“All these companies that have cloud businesses and data centers that use Huawei, they understand that in terms of 5G, sophisticated smartphones and their servers, they are going to be out of chips,” Krach said after his eight-country European tour.