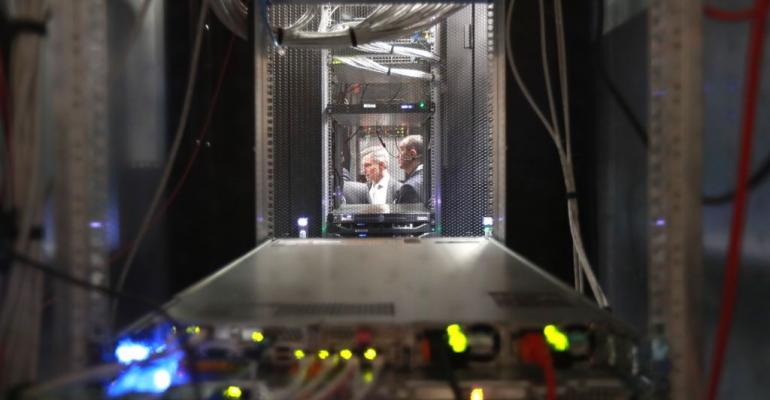 Commercial providers want regulations that would push enterprises to move out of their old, inefficient data centers.

Facing a threat of future energy efficiency regulation in Europe, commercial data center providers have been calling on European Union officials to pressure enterprise IT shops to get out of their old, inefficient data centers – and move into modern, more efficient facilities the providers operate.

These calls have been coming as EU regulators draft rules to contain the growing IT sector’s environmental impact, part of the Green Deal initiative unveiled in November. The plan made future regulation of data center energy efficiency in Europe a real possibility:

“…Europe needs a digital sector that puts sustainability at its heart. The Commission will also consider measures to improve the energy efficiency and circular economy performance of the sector itself, from broadband networks to data centres and ICT devices.”

Earlier this month, after a persistent, months-long lobbying effort, the operators seemed to have parried, or at a minimum delayed the threat of regulation, when the European Commission made its first official statement about data centers since threatening measures in December in its plan to make the continent carbon-neutral by 2050.

Europe's new administration declared that the data center industry should become carbon-neutral by 2030, a full twenty years before the rest of the economy. But this intervention, made as part of its Digital Strategy for tech sector reforms, amounted to no more than a call for industry to act and a promise of future initiatives to help the industry create a class of “climate-neutral, highly energy-efficient data centers.”

Meanwhile, commercial data center operators have sought advantage by offering themselves as the solution to the problem, calling for penalties on the old data centers corporations built before independent operators emerged as an industry. The old enterprise data centers – the very market that operators are seeking to harvest as their own source of new business – would become uneconomical if regulators penalized them, forcing corporations and the IT outsourcers that typically manage them to replace them with the commercially operated facilities.

Michael Winterson, European managing director for Equinix and policy committee chair at the European Data Center Association, has led the lobbying in Brussels. Winterson warned officials that imposing environmental rules on commercial operators would stifle the industry's own efforts to become climate-neutral, he told DCK. Regulators should instead use their power to encourage consolidation of the world's enterprise computing centers into independent facilities.

“Our recommendation is not to create legislation that slows down the mass movement of servers out of enterprise data centers into colocation, managed service, and cloud,” he said. “And if you impose a tax on us, all you'll do is force enterprises to keep their servers in their data centers, which are typically old and inefficient.”

According to Winterson, his team told cabinet officials for Frans Timmermans, the European Commission VP leading the Green Deal initiative, that the data center industry could get climate-neutral by 2030 if EU regulations were designed to help it do so.

One idea they suggested was creating a minimum operating threshold that could distinguish green data centers from the rest, Winterson said. “Tax those below it” and reward anyone who operates above it, give tax incentives to companies that invest in green energy, and the industry could get green by 2030.

“We said, of all industries, the data center industry – and telecommunications, and cloud – is probably the closest to carbon neutrality,” he recalled. “With a little bit of help, you could probably edge us to complete carbon neutrality.”

“They've been respectful, and they've agreed,” Winterson said. But the Commission is still working out what “teeth” to put in the legislation drafts. Its statement this month, apparently a tough declaration that the industry should get green, and fast, demanded only what the industry had asked, and omitted sanctions.

The green operating threshold might include metrics like PUE (Power Usage Effectiveness), Winterson said. But it should also include the server inlet air temperature envelopes by ASHRAE (American Society of Heating, Refrigerating and Air-Conditioning Engineers), he said. The ASHRAE envelope’s upper end is high. “Most enterprise data centers can't even begin to operate at those levels, whereas most modern data center operators could,” he said.

“This ought to be done, because the data center economy is growing and growing and taking up more and more electricity,” Ober said. “And if the really big players have not understood it completely right now – at least that's how it looks to me – then we need to do something about it.”

Pointing to Microsoft’s experiments with submerging data centers in the sea, Ober said regulators should use tax incentives to persuade operators to pump waste heat into district heating systems operated in many European cities instead of helping warm the oceans. Ober is director of the Sustainable Digital Infrastructure Alliance, a group campaigning for such incentives.

It would be logical, he said. The computer industry needs more data centers in city centers, where electricity resources are strained. Cities, struggling to meet environmental targets, have meanwhile realized how expensive it would be to decarbonize domestic heating. Regulators could solve both problems by joining them. In its latest announcement, the Commission signaled it may help do just that by saying data centers should “reuse waste energy.”

Data centers in Amsterdam, where Vattenfall has invested heavily in district heating, recently became a political point of contention for apparently putting a strain on the municpality’s energy resources. Even before the data center power issue turned into a crisis in the summer, leading to a temporary moratorium on data center construction, authorities had already imposed a PUE limit of 1.2 on new data centers.

Green Is Easier in the North

Eric Boonstra, VP and general manager for Iron Mountain Data Centers in Western Europe – who sits on the Amsterdam Economic Board and the board of the Dutch Data Center Association – also said EU regulators should define PUE limits.

But, he said, they should apply different rules in Northern Europe, where a low PUE is easier to achieve by cooling with cold outside, than in the hot south. The rules should also be different for new data centers, designed with the latest technology, and old ones, where a retrofit for efficiency could cost 2 million Euros, he said.

"It’s bit like, you have a 15-year-old car, and somebody comes up to you and says you have to throw it away; you have to go and buy an electric. But you don't have £100,000 to buy a Tesla. It is not fair to expect that of somebody who doesn't have the means,” he said.

Menzel was an architect of the Merlin data center Capgemini built in 2008. The company claimed at the time that the facility was the most sustainable in the world.

Many data centers, Menzel pointed out, were built in the eighties and nineties. Retrofitting them with more efficient equipment can only get you so far, because “it’s still basically the old design. It's going to be pretty hard for a supplier who has made long-term investment into that data center, if government says now you have to be sustainable or switch it off.”

The data center provider industry has been “good at self-regulating” efficiency, because the more efficient a facility is, the less its operator can charge for services, he said. “Customers will force providers to change much quicker than regulations can be established.”

Regulators should help create a sustainability metric akin to nutrition labels on food, Menzel suggested. It would cite not just energy efficiency but a host of sustainability measures and encourage the industry to adapt.

Steve Hone, director of the Data Center Alliance (an industry body), said the Commission's threat of regulation was “ignorance from politicians.” Data center operators can only do so much, he said, and consumers, whose growing appetite for internet services (such as Netflix) is creating the need for more data centers, share responsibility for the industry’s emissions. Also sharing the responsibility are hardware and software vendors, as well as the service providers that put that hardware and software inside data centers.

David Rowe, CEO of Hydro66, a Swedish data center provider that powers its data centers with hydroelectricity and cools them with outside air (claiming the extremely low PUE of 1.07), said most people in the business were trying to find the cheapest way to make the greatest appearance of being green. But you can't blame them, when they have data centers that were built 20 years ago in city centers, far from renewable energy sources, before sustainability was so acute of an issue, he said.

“There's only so much [those operators] can do,” Rowe said.” Whatever happened in the past is going to be dwarfed by what happens in the future,” he added, apparently referring to the amount of data center capacity that is yet to be built.

Doing Too Little for Too Long

While data center providers have business incentives to “self-regulate” for efficiency, the overall data center industry’s record of such self-regulation isn’t great.

John Booth, a sustainable-IT consultant who has helped develop the EU Code of Conduct on Data Centre Energy Efficiency, and who sits on committees that formulate relevant standards, said he was annoyed with the industry's minimum-effort inertia on sustainability and its failure to adopt the 150 efficiency measures detailed in the Code and refined continually over the last decade.

“If industry had taken it aboard earlier, they wouldn't be in this situation now,” he said. “This threat of regulations is the Commission saying, you've had 10 years to sort stuff out. Too many of them took it as a tick-box exercise and did the absolute minimum they could get away with. They just can't be bothered.

“The Commission would have preferred self-regulation. Its thinking now is, ‘We've given them enough rope, they haven't taken it, so now we're going to tie that rope up and hang the bastards.’”

Mark Acton, editor of the EU Code, who also works with Booth on standards committees, said Commission officials didn't understand data centers, and neither did they understand PUE. The metric is too easy to manipulate to make a facility appear more efficient than it is.

Meanwhile, the Code of Conduct has been an “abject failure,” because EU officials have administered it “shockingly appallingly,” Acton said. It has been left to “wither on the vine.”