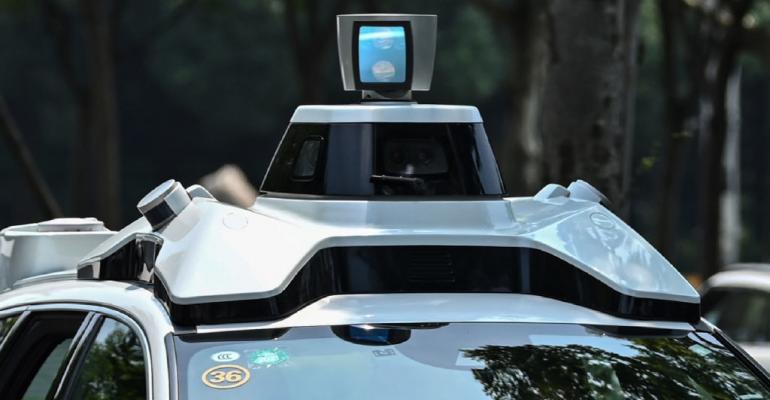 HECTOR RETAMAL/AFP via Getty Images
Didi Chuxing autonomous taxi during a pilot test drive on the streets in Shanghai in July 2020.
Business>Regulation

China is increasingly concerned by security issues related to intelligent vehicles, exemplified by the Didi crackdown and pressure on Tesla.

China will require intelligent-vehicle makers to store locally generated data within the country, the latest step in a broader regulatory crackdown on business.

Personal information and important data collected and generated within China should be stored in China in accordance with relevant laws and regulations, the Ministry of Industry and Information Technology said in formal guidelines released Thursday.

Under the new guidelines, which were first mooted in April, regulators will need to approve any data exports, and over-the-air software upgrades also have to be filed with the ministry before being implemented.

China has demonstrated an increased concern over information-security issues related to intelligent vehicles, as part of a broader oversight on data exports including a recent crackdown on ride-hailing giant Didi Global Inc.

Earlier this year, Beijing requested Tesla Inc. -- the only wholly foreign-owned automaker in China -- to store all data gathered by its cars locally, after the vehicles were banned from entering military compounds and some government areas on concerns their cameras could be used for spying.

The U.S. electric vehicle pioneer soon pledged to abide by the request and set up data centers in the nation.

However, limits on the use of consumer data, or restrictions on what can be shared with foreign partners and authorities, would have major repercussions on China’s burgeoning EV industry, which is counting on its vast troves of information to gain an advantage over traditional automakers.

To comply with the new regulations, intelligent vehicle manufacturers have been urged to set up corporate vehicle data and security management systems. They should also implement technical measures to protect security and privacy related data with a self-check system that can report potential problems in a timely manner.

Companies promoting assisted- or autonomous-driving functions should also clearly state the potential limitations and responsibilities between the driver and the control system, the ministry said Thursday. These vehicles are also encouraged to be connected to China’s Beidou satellite navigation system.