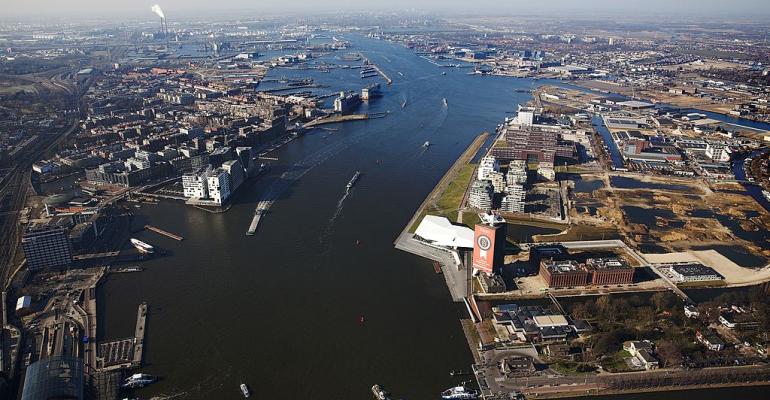 The city is out of space and power, and there are signs of government and industry agreement on a new location. Now, they have to convince the public.

Amsterdam is preparing to build its next cluster of data centers in a neighboring county, after officials and experts concluded that the capital does not have the space to accommodate the mushrooming number of gigantic hi-tech warehouses nor the electricity to satisfy their extraordinary power load.

The group that effectively made the decision has been tackling the dilemma of where to put Amsterdam's data centers for the last three years. Pending a final, formal decision, they will be built in Almere and Zeewolde, counties wrought from the sea with dam walls on Amsterdam's Eastern flank in the 1960s. Their spacious province, Flevoland, has become home to growing wind farms and new towns. Official studies have declared it the best spot to build data centers.

But whether and where to direct the overspill of an industry that made the Dutch city one of the world's few major internet communications hubs has been such a tough decision, that the region's authorities have put the final reckoning off for another year, officials told DCK.

First, there are the people of Almere and Zeewolde, who must agree to the plan. Big, power-hungry data centers have come to public attention with outrage and bad press. The officials plan to spend the next year selling the idea to locals. Among their big talking points is that data centers have become part of the foundation of Holland's economy and inherited from its historic seaports responsibility for upholding its national identity as a global trading hub.

There’s some selling left to do to the industry itself, where some players still appear reluctant to accept that they are being forced to relocate. Developers and operators have spent 20 years building three adjacent data center clusters in Amsterdam's central boroughs. They are now being forced to accept that their future facilities will be built further away than has been thought feasible.

"Our most desirable location is next to the existing ones," said Stijn Grove, who as director of the Dutch Data Center Association (DDA) has been deeply involved in national planning. "Otherwise, it’s a 30 km circle.

“Nothing is decided yet. We are working on several options. The direction is clear, but to have something decided will take years."

The industry wanted to keep its data centers within a 10 km radius of the Amsterdam Internet Exchange. Also known as AMS-IX, it is one of the world’s largest internet exchanges. Together with the data centers that sprung up around it, the peering hub made the city a primary junction of the global internet.

Operators built data centers in "hyperconnectivity clusters," where the buildings’ close proximity to one another made it feasible to create dense webs of communications between the different services each of them carries from different corners of the internet. Almere and Zeewolde, on the other hand, are 30 km away.

But officials disagree on how open the options are. The aldermen, deputies, and politicians of the greater Amsterdam assembly of municipal authorities (the MRA) have all agreed their preference is Almere and Zeewolde, according to a policy maker who spoke with DCK on condition of anonymity.

"By now, [the data center industry] should have realized that Amsterdam will not have the possibility of facilitating an enormous growth in hyperconnectivity data centers in the next decade or so,” the official said. “Amsterdam has enough instruments to prevent the DDA choosing its own path."

And the industry appears to be accepting its future relocation.

"Considering the constraints, I believe the most likely location is going to be the Almere area,” said Michiel Eielts, DDA chairman and Benelux managing director of Equinix, one of the largest data center operators in Amsterdam. “It's a mid-term solution -- five years -- but it has a great long-term potential.”

Others involved in building Amsterdam's internet infrastructure say it will be Almere too. Jesse Robbers, who as former chief commercial officer of AMS-IX consulted the policy makers, said any latency in communications caused by the distance between Amsterdam and Almere would be insignificant.

"Distance is not an issue in the Netherlands,” he said. “It doesn't matter if you build a data center in Amsterdam, Groningen, or Rotterdam, the latency is the same," However, "in Zeewolde, the connectivity infrastructure needs to be built from scratch."

Data center operators prefer to build the hyperconnectivity clusters within a 10 km radius primarily to save cost. Andrew van der Haar, managing director of the Fiber Carrier Association -- whose members would install and rent out the fiber optic connections to the new cluster (and whom policy makers also consulted) -- said the deciding factor was finding a place where the electrical grid could be built to support it. "Thirty kilometers to Almere won’t make any difference," he said.

Frank Halsema, who represented Almere’s local government on the regional policy team, said all three reports they commissioned from consultants concluded that Almere and Zeewolde were the best locations to build Amsterdam's fourth hyperconnected data center cluster. ("Almere is the best and possibly the only location," Michiel van Werven, who authored one of those reports as senior managing consultant at Berenschot, told DCK.)

Still, it remains a tough decision, and the final reckoning has been put off until Almere and Zeewolde conduct a public inquiry, which they are expected to deliver and vote on next summer. The central government will have part in it. Local officials say it can force the issue if no consensus is found. But the Dutch tradition is local autonomy.

Out of Space and Power

State-run power companies, Tennet and Liander, will also have a part in the decision. Officials and experts say the cluster will need a massive national investment to make the electrical grid powerful enough to supply an industry that policy makers forecast would, in ten years’ time, be nearly seven times larger than it is already.

It was that growth forecast that caused Amsterdam and Haarlemmermeer to stop accepting new plans for data center construction last year, and this year to draft policies that promise "strict" conditions on developments in the city center. Electricity infrastructure in those central boroughs, where internet data centers have clustered, was beginning to strain under the load they put on it.

Growing in number, data centers had been increasing their cumulative load on the city's electricity grid by 20 percent annually for the last five years, tripling their load to 350MW. Consultants told town planners they would continue growing at least as quickly and reach at least 2.3GW by 2030, according to municipal documents DCK reviewed. That is nearly three times as much as all the city's homes are forecast to consume by then.

Meanwhile, Amsterdam is struggling to cut its CO2 emissions to meet environmental targets. National policy has dictated that regions generate their own renewable energy and become carbon-neutral by 2050. The greatest sources of CO2 locally are gas heating and electricity.

Finally, Amsterdam central is simply running out of space. Data center operators therefore plan to construct more data centers in the green suburbs of Haarlemmermeer in the next decade, where one of Amsterdam's existing internet clusters sits. Haarlemmermeer council voted last month to adopt a policy to stop all building after that. There would be no space left after the currently planned facilities were completed, policy makers said.

Haarlemmermeer refused to be made responsible for providing power infrastructure for an industry that served the national interest. "We as a municipality will never be responsible for generating electricity for the data centers," said the council’s policy document.

The municipality plans consequently to make data center builders construct not in the conventional warehouse format but over at least three floors. Companies behind big projects would be responsible for paying for the needed grid infrastructure.

Amsterdam said the same in July in a draft policy: there was no more room for data centers other than the ones currently planned. Existing and currently planned data centers would amount to 700MW in Amsterdam; between the two boroughs, it would be nearly 1400MW -- one and a half times what the city center's homes are forecast to consume in 2030.

DDA told policy makers that their planned growth in Amsterdam would be about half the forecast, because of the space and power shortages. They have already made plans to do a third as much construction in Almere in the next decade as they plan to do in Amsterdam and Haarlemmermeer, according to records of Tennet and Liander, the utilities whose cooperation is a vital first step for data center planners.

Other locations are officially still on the table and might yet come to house data center clusters of their own. The most favored are Velsen and Beverwijk, towns on the Metropolitan Region Amsterdam’s west flank, on the North Sea coast, where there are landing stations for intercontinental submarine cables and electrical cables from extraordinarily large wind farms Tennet is building off the coast over the next decade. But those towns have little available land for construction and scant need for recycling data center waste heat to warm homes and offices, according to a consulting assessment of the options, published in May.

That was a deciding factor for Almere, after a year of press reports about the vast energy consumption of data centers in a country with ambitious environmental targets. Town planners want to put data centers in densely populated places, where their excess heat can be fed into pipes for comfort heating. That heat is “low-grade,” which means only the most energy efficient, new homes can use it. Planned housing in Almere makes it ideal for this reason.

The northern counties of Flevoland are building a vast wind farm as well, which planners reckon is a prerequisite for siting a cluster of data centers. Broader plans to develop the region have assured planners that grid investment there is needed for other development as well.

Oostzaan, a town north of Amsterdam that had been considered as the third option, was ruled out because it was also deemed short of space. Data center operators as well had little interest in it, said consulting firms BCI and CE Delft; neither were they keen on Velsen.

The market appears to have settled on Almere. DDA has already been working with local officials and carriers to set plans and build communications infrastructure in Almere and Zeewolde, DCK understands. It set that course in a national strategy for data centers published with the Ministry of the Interior early last year. The same ministry named Almere in its National Environmental Vision in September.

National planners say they are worried that Amsterdam will lose its place as one of the main junctions of the global internet if it can no longer accommodate the internet's growth. Formal Metropolitan Region Amsterdam policy will clarify Amsterdam and Haarlemmermeer's positions in February: internet data centers are spilling out of Amsterdam; a place to put them needs to be found. Then follows public consultation.