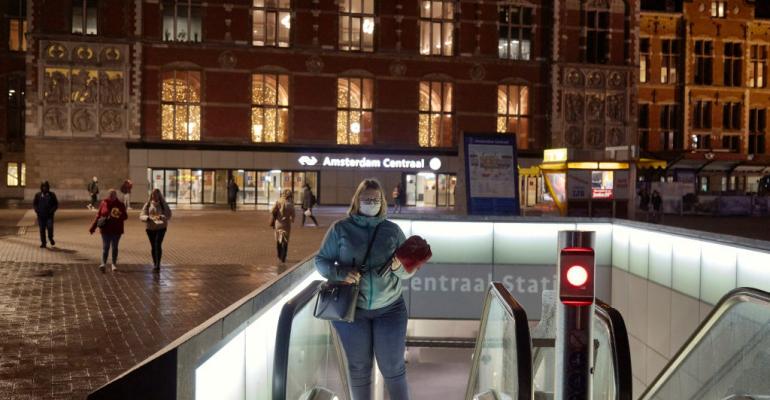 Amsterdam Officials Challenged as They Mull Limits On Data Centers

As the City Council prepares to vote on new restrictions on data centers, the industry is questioning the energy consumption estimates the restrictions are based on.

As Amsterdam City Council prepares to cast an historic vote to impose environmental rules and building restrictions on data centers, the data center industry has raised questions about the calculations by which the city justified its move.

Elected officials in the city, having found themselves responsible for one of the world's largest internet data hubs, will vote Thursday on a policy that would forbid any data centers to be constructed for the next five years except existing projects already approved and limit new building thereafter.

Related: Amsterdam’s Next Data Center Clusters Will Be Built Out of Town

The policy would require data center operators to take costly measures for the sake of the city's residents and other businesses, after city officials concluded that data centers are taking up so much space and consuming so much power that the city and its electricity grid are running out.

Yet with public demand for internet services expected to grow 20 percent annually for the next 10 years, and with city officials, regional and national government, and industry all keen to preserve Amsterdam's place as a major global data hub, policy makers are concerned that they might scare potential investors into building in other European cities instead.

Amsterdam's data center policy, published in council records last week, stressed that the city had enough space and power to satisfy demand from new data centers for the next 10 years. But the vote this week would give officials power to dictate how much data center construction can happen in a year, with annual limits based on estimates of market demand for space and power.

Industry has now challenged the estimates the city used to justify its policy, claiming internet data centers consume half as much power as officials claim they do.

As city representatives prepare to vote on the restrictions, it has emerged that officials have already agreed to review the way they measure data center energy consumption.

The policy meanwhile includes a vow to lobby for changes to a Dutch law believed to be responsible for the difference between official estimates and industry's own claims for how much power it consumes, forcing data centers to hog twice as much power as they need.

The industry is challenging an official estimate that the energy consumption of data centers in the greater Metropolitan Region of Amsterdam (MRA), excluding hyperscale data centers operated by giant cloud firms such as Microsoft, Google, and Facebook, will grow 20 percent annually for the next decade, until they consume a total 2,500MW -- three times as much as all the region’s residents are expected to consume then.

That growth -- about 140MW a year -- has been fixed into an official limit on data center growth, and split between the two central borough authorities of Amsterdam and Haarlemmermeer, where most of the energy consumption attributed to data centers in the region occurs. Half of that limit will be voted on in Amsterdam’s council chamber tomorrow. Haarlemmermeer councillors voted in October to impose their 70MW annual limit. Officials said there would be no more room for data centers after 2030.

Michiel Eielts, managing director of Equinix, one of Amsterdam’s (and the world's) largest data center operators, and chairman of the Dutch Data Center Association (DDA), told DCK that it had been lobbying Amsterdam policy makers to revise their numbers.

"I think the real growth is more like 50-60MW per year, as indicated by industry research," he said.

That would amount to 500-600MW by 2030. The difference from official estimates, said Eielts, was "how you define the numbers."

"It all comes down to definition, and the DDA is discussing just that with the MRA, including the baseline definition.

"I estimate that we need three to six months to discuss this with the authorities.

"We agreed that after the vote, which we assume is positive, we will start the meetings on baselining and measurements to make sure we are all aligned and don't end up with frustration on both sides after a few years.

"Nobody has a glass ball, but the amount of investments involved are off the charts when you assume 2000MW, fully built and consumed," he said.

Eielts said the difference between industry's estimate and Amsterdam's was that industry's was based on the actual consumption of energy by data centers. Amsterdam's numbers, according to its reports and policy documents, were based on the total "installed capacity" of computing equipment that might be used were the data centers to run at full capacity.

The city's 140MW limit would leave industry with "plenty of room for growth," he said.

Real Numbers Hard to Come By

Maurice Kuipers, senior consultant at BCI Global, who with CE Delft, another consultancy, produced the 2030 forecast for the MRA authorities, said they had not changed their forecast, even after the pandemic.

Data center operators agreed with the official numbers before they were published, he said.

"Everyone agreed on the numbers as we presented them in our report, including the data center operators and the energy companies. We interviewed most of the large data center providers. They did support our forecast," said Kuipers.

It was "very tough" to get either the data center operators or the power companies to share their energy consumption figures at all.

"The very large suppliers of electricity and infrastructure don't disclose that. The data center industry is not very transparent. You can look at ten different reports and you will get ten different forecasts on how the market is growing," Kuipers said.

Statements industry made to the municipal researchers were inconsistent and incomparable, he said. Energy companies were also not transparent. They had accurate forecasts but were not allowed to disclose them. BCI was given numbers but forbidden to disclose them, he said.

Amsterdam's public policy statement included only vague reports of energy consumption from the city's 27 major data centers in July. The total consumption of facilities operated by Equinix and rivals including Digital Realty, Verizon, and Interxion totalled between 67MW and 210MW, according to the statement.

A senior official responsible for data center policy in Amsterdam told DCK that policy officers from the region's different municipalities were discussing the forecasts with the DDA "intensely."

"We are talking about the results of this study, that was assigned by the MRA on the estimated development of the electricity capacity for data centers.

"The DDA have a different view, and they have a tremendous amount of knowledge of what is happening in their sector, so obviously we should listen to them, and this is what we are doing.

"So, if DDA tells us this research is wrong, we have a discussion with them, because we don't claim to have the absolute numbers," said the official, who asked not to be named.

The numbers upon which the policy was based were just the best the consultants could do at the time. "These numbers that these consultants came up with, we don't consider them to be the absolute truth. The problem is if you wait till you know what is happening, you are too late.

Data centers in MRA used 214MW of peak power in 2020, according to numbers held by Liander. But they contracted power companies to supply 417MW, as BCI forecast they would. In central Amsterdam, they used 97MW but reserved 131MW of capacity on the grid.

The problem for lawmakers, and for the grid operators, is that the latter must reserve supply that data centers have contracted, even if it is not used. Data centers reserve the power they might need if they do sell all their computing capacity to customers, and if each customer uses all the capacity it rented. If there came a hot day, requiring the facilities to provide more cooling, they might use even more energy, said Ross.

Liander supports the MRA lobby for legal reforms of the power infrastructure, said Ross, because it would make use of the excess power, and other excess capacity power companies are required to keep in case of an emergency.

"Our opinion is, let's use the emergency capacity for data centers, because if we need that capacity, a data center has the ability to use backup generators.

"Our backup system is capacity on the grid. Let data centers use that extra capacity, from solar fields and wind farms, so they can grow more and more before 2030, and when there is an emergency, we can take them off the grid."

That would free up power Holland needed for its "energy transition," under which industry and households will cease using fossil fuels in favor of renewable energy. The strain on the utility infrastructure is expected to be great, even before the extraordinary growth in power-hungry data centers in the center of Amsterdam.

Still, said Ross, the city was right to impose limits on data center growth to encourage the industry to continue its expansion in a neighboring town. It would give the power companies time to build power infrastructure. "That's why we are happy with the policy," he said.

Another municipal official involved in drafting MRA data center policy, who spoke to DCK on condition of anonymity, said the regional authorities had long been aware that the DDA believed its industry's energy consumption would be lower than forecast. But they balanced this against data from the power companies that showed it would be greater, and a need to make sure the region had enough capacity to support other industries and housing through the energy transition.

"We discussed this policy intensely with the DDA. They agreed the rules we settled on. There was some discussions about the growth. They said it was an overestimation. At the end of the line, they thought it was a good limit," the official said. He said he was not aware of ongoing discussions about revising the forecasts.

DDA told policy makers that it expected growth to be 10 percent less than forecast, according to official documents. Official estimates put growth at about 20 to 30 percent. DDA assumed growth would be constrained by power grid congestion and a lack of space for new buildings. BCI based its forecasts on what data centers would use if their demand for growth were unhindered.

Frank Halsema, ICT sector manager at Almere, an MRA public authority that officials have earmarked to accommodate Amsterdam's overspill of data centers in 10 years’ time, said the MRA policy team was confident the forecast it got from BCI and CE Delft was objective.

"We will [collaborate] with all stakeholders, including the DDA, when we execute research for the formation of the fourth [data center] cluster" in Almere, he said.

Another MRA policy official said, "Of course there's debate about market demand. It's very difficult to make an estimate about that. It depends on a lot of factors, and when you are two or three years down the road, the number will change.

"So, maybe it’s not the number that counts. It’s fair to say we estimate a growth in demand. We don't know exactly how big it will be, but there will be growth."

Penny Madsen Jones, European research director at CBRE, whose data was used as the basis for the MRA’s forecasts, said the political measures in Amsterdam had already dented industry growth.

Siem-Jan Vos, partner with NL Real Estate, an agent employed by data centers seeking to build in the city, said operators’ construction plans had been set back by about two years by the city’s shortage of power capacity, so industry growth would have slowed anyway.