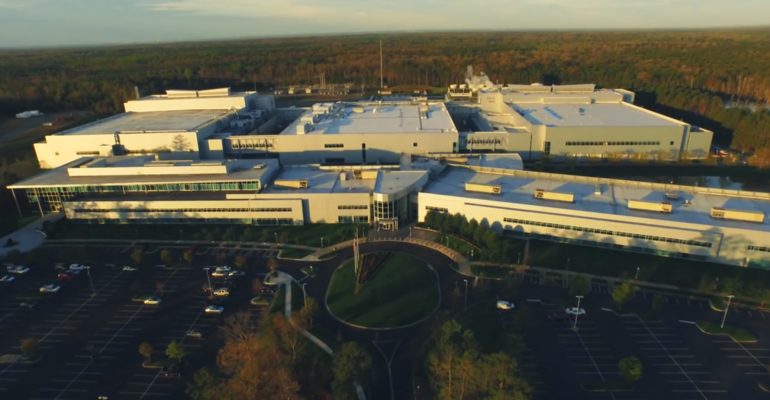 The growing size of hyperscale leases can present funding and profitability challenges for data center landlords. This has created a need for even the largest publicly traded data center REITs to seek institutional capital.

QTS Realty this week reported earnings and 2019 guidance with a lot of moving parts. In an exclusive interview with Data Center Knowledge, CFO Jeff Berson helped us put those in perspective. The company also announced a hyperscale joint venture partner and a large secondary equity offering, which necessitated moving up the scheduled earnings call to Monday afternoon on short notice, Berson told us.

The size of hyperscale deals and length of initial lease terms continue to grow, especially in the Northern Virginia market, which set a net-absorption record of 270MW in 2018. QTS's 10-year, 24MW lease in Manassas, Virginia, with a global cloud software firm was higher in capacity than total leased last year in any other US markets except Phoenix, Dallas, and Chicago.

This customer (reportedly Salesforce) leased the entire 118,000-square foot shell and is ramping up over a two-year period. When all the data halls are built out, QTS estimates the total investment will be around $240 million – a big number for a publicly traded REIT with about $2.2 billion in market cap. However, a large mission-critical asset leased to a creditworthy tenant for ten or more years can be an attractive investment opportunity for patient capital, such as infrastructure, pension, and sovereign wealth funds.

This is where QTS’s fifty-fifty joint venture with global infrastructure fund Alinda Capital Partners comes into play. Alinda’s investments include London's Heathrow Airport, energy pipelines, and shipping terminals. Now, with the QTS joint venture, Alinda has committed up to $500 million over the next five years, which together with QTS’s share provides $1 billion in data center construction funding.

Alinda will be funding half of the Manassas data center. QTS can recycle the capital to partially fund its 2019 Capex budget of $450 million to $500 million of projects spread across seven campus locations (in addition to the Manassas build). 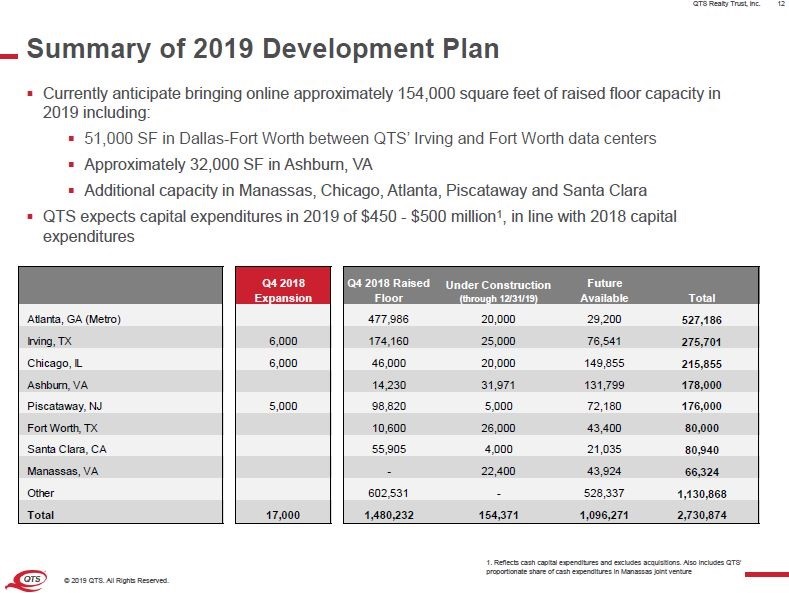 The other big news on the QTS earnings call was the announcement of a $6.75 million secondary share offering, which should fully fund the balance of the 2019 development plan.

"From a financial and operating performance perspective, 2018 demonstrated the strong underlying momentum in our business, which resulted in a near-record backlog of signed, but not yet commenced revenue as of the end of the year, which materially de-risks our growth outlook,” Berson said. “In addition, we have continued to demonstrate strong balance sheet management through funding our 2019 business plan from the recent common stock offering and enabling future hyperscale growth opportunities in a capital-efficient, higher-return structure similar to the joint venture we recently announced with Alinda Capital Partners."

More than $40 million of annual revenue from QTS's nearly $63 million booked-not-billed backlog reported as of December 31 is scheduled to commence during 2019. 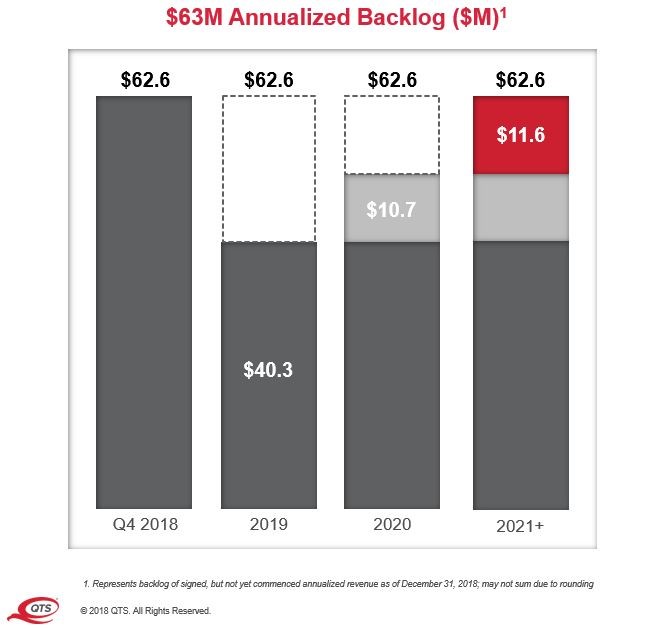 Berson told us that in addition to this "hard pipeline," there is also a soft pipeline of leases under negotiation. Combined, they are greater than the company's deal pipeline at the same time last year.

In addition to its share of revenues from the Manassas JV, QTS will be receiving development and management fees. These fees will bump up the return on invested capital from 9 percent (prior to the JV), to 12 percent when the property is fully stabilized within 24 months. 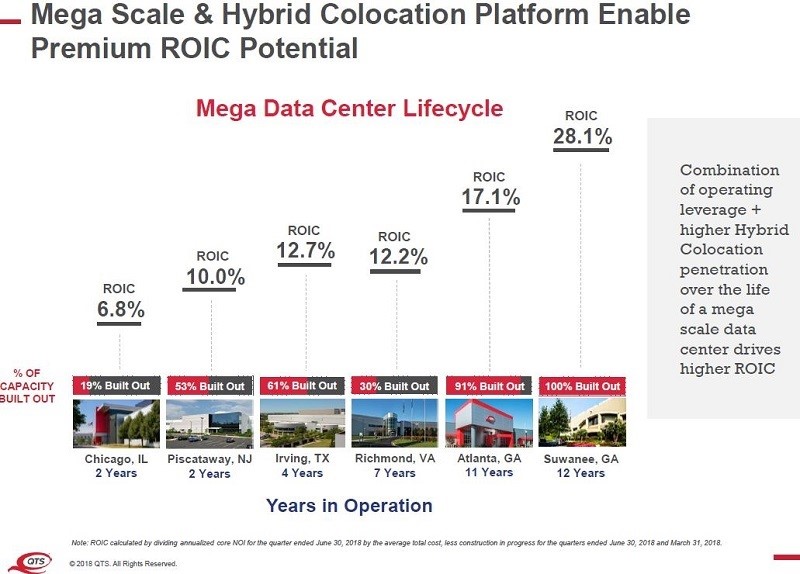 This compares quite favorably with the historic returns QTS generated from buying existing infrastructure-rich sites like a former chip plant and a printing press and converting them into modern data center campuses. It can take more than seven years to generate 12 percent returns. However, as utilization increases, these QTS mega data centers can deliver much higher returns in later years.

There have been a lot of changes to the QTS go-to-market strategy over the past 18 months, including: transitioning non-core cloud and managed services customers over to IT services partner GDT; shifting focus to hyperscale and hybrid IT (including buying land for ground-up data center campuses); launch of QTS's software defined data center platform; and a focus on monetizing cross-connects to grow interconnection revenue.

The ability of QTS’s management team to execute on this new strategy has resulted in a 580 bps increase in adjusted EBITDA margin and an increase of operating FFO per share of 6 percent year-over-year. The QTS board just raised the quarterly distribution by 7.3 percent, generating an attractive current yield for shareholders of about 4.2 percent.