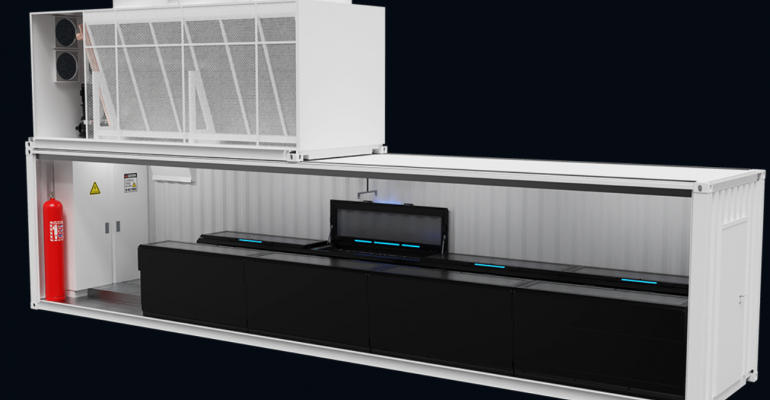 Submer
Rendering of a Submer MegaPod
Design>Power and Cooling

The Barcelona-based startup’s container submerges servers in dielectric fluid, enabling 800kW of IT load in a 40-foot-long box.

Liquid cooling company Submer has introduced a new modular data center solution that, by submerging servers in dielectric fluid, will enable its customers to pack a lot of compute muscle in a relatively small amount of space.

“It’s super high-density,” he said. “A traditional 40-foot modular data center would probably [provide] a maximum of 100kW today. We can provide 800kW in that same space.”

The MegaPod follows Submer’s MicroPod, a smaller units aimed at “far edge” use cases, such as server deployments on rooftops, for example.

Submer’s immersion cooling system is much more energy efficient than air-cooled solutions, resulting in a PUE of 1.03 and lower total cost of ownership, Pope told us.

“The whole industry is realizing that to continue to cool with air is just getting more and more expensive to do,” he said. “From a future-proofing perspective of future facilities, liquid cooling is the way to go.”

While liquid cooling is common in high-performance computing, the technology is still an emerging market for mainstream data center uses. Non-HPC use cases for liquid cooling include edge data centers and other applications that require high-density servers, such as AI and blockchain.

A recent Informa Engage Survey, which surveyed 149 data center professionals last fall, found that use of liquid cooling has stayed flat the last three years. In 2020, 35 percent said they were in production or experimenting with liquid cooling, up just 2 percentage points from those surveyed in 2017.

“Conversations about adopting liquid cooling have increased dramatically, with a lot more seriousness. There are pilots going on in the big cloud companies. There is real interest, but we are still not seeing many sales,” Andy Lawrence, executive director of research at the Uptime Institute, said in an interview with DCK. “I do think adoption will pick up. We are not seeing it yet.”

According to the Informa Engage survey, the top deterrents to implementing liquid cooling is the cost of retrofitting, concerns about water in the data center, and the fact that the operators are happy with their existing cooling systems.

Still, the market potential for liquid cooling in the data center is quite big, Lawrence said.

“Many new data centers will be built in the future to replace the existing ones – and the case to use liquid technologies will undoubtedly get stronger and stronger,” he said.

A solution like Submer’s modular data centers does have its advantages. In addition to reduced water usage and improved energy efficiency, modular data centers can be placed anywhere (outdoor or indoor) in edge locations, said Tomas Rahkonen, research director at the Uptime Institute.

Another benefit of liquid cooled systems is that they don’t need fans, which further improves energy efficiency. They also enable customers to overclock their servers for compute-intensive applications, he said.

Microsoft recently announced that it’s been experimenting with running production workloads on servers submerged in liquid, hoping ultimately to compensate for the slowdown in year-over-year CPU performance gains by cramming more processors into a single data center.

Submer executives say they are seeing strong interest in its liquid cooling solutions. The startup’s customers include the European Commission; Colt Technology Services Group, a telecom provider based in London; and some web hosting companies, Pope said. Submer also has a partnership with Digital Realty and is working with some hyperscalers that he wasn’t in a position to name.

The startup, which launched in 2015, is positioning the MegaPod as an edge solution for verticals like fintech, government, and traditional data center operators that are seeking to leverage edge locations with a simple form factor, Pope said.

Submer supports servers from all the major hardware vendors. It can install the hardware and deliver MegaPod units to customers within 12 to 16 weeks, depending on how customized their requirements are, he said.

One additional benefit of the MegaPod, Pope pointed out, is that it allows customers to monetize the heat produced by their data centers.

Submer’s design features a cooling distribution unit that manages the flow of the fluid through the IT equipment. That unit transfers the heat to a closed water loop that takes the heat outside, where it can be released or reused, he said.

MegaPod customers can reuse the hot water (about 120F) for industrial use or district heating networks.

“Imagine a telco rolls out edge infrastructure. It can select sites that can monetize the energy produced,” Pope said. “It can deploy a modular MegaPod next to a greenhouse or an industry that requires warm water to execute an industrial process, or it can deploy it next to a utility provider, which is purchasing heat for its district heating networks.”

Submer doesn’t plan to sell the MegaPod directly to customers. It has lined up partnerships with major data center vendors who will make the solution available to their customers, he said. Submer plans to announce those partnerships this spring.