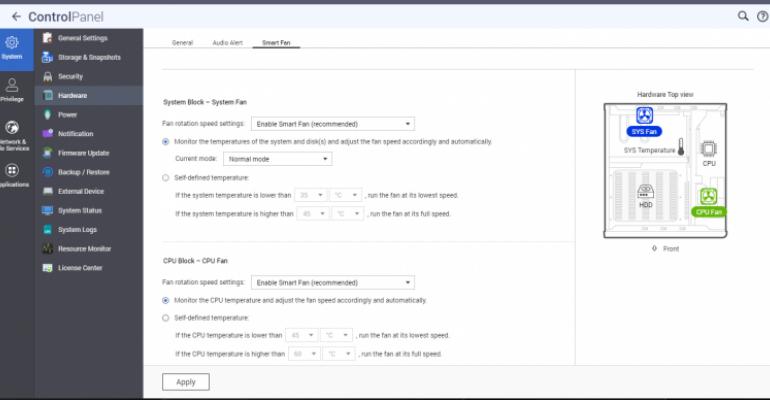 Here’s how to “take the temperature” of your NAS appliances.

I recently encountered a situation in which one of my production NAS appliances suffered significant damage as a result of overheating. One of the appliance’s fans failed, and that caused the disks to begin to overheat. As a result, three hard drives ultimately failed and had to be replaced.

The crazy thing about this situation is that the appliance wasn’t even under a load at the time. In fact, I wasn’t even home when the fan failure occurred, which means that there was minimal (if any) disk activity, and yet the loss of a single fan caused catastrophic overheating to occur.

Obviously my first step in recovering from this incident was to replace the failed hardware. In doing so however, there were two things that occurred to me. First, even though only one fan had failed, it would be prudent to replace all of the fans because they were all the same age. If one fan had failed, others might also be on the brink of failing. Second, the existing fans were obviously inadequate since the loss of a single fan caused the appliance to overheat even though it was idle at the time.

Ultimately, I ended up replacing the NAS appliance’s generic case fans with premium fans. In addition to other benefits such as reduced friction, noise, and vibration, the new fans are able to run at higher RPMs if necessary. That meant that if one of the new fans were to fail, the remaining fans would be able to run at higher than normal speeds to help make up for the failed fan.

Even with the increased airflow however, there is no guarantee that the new fans would be able to provide sufficient air flow in the event that a fain failed. As such, I turned my attention to the appliance’s settings.

One of the most basic things that NAS appliances do in an attempt to keep themselves running at an acceptable temperature is to increase the fan speed in response to elevated temperatures. If you look at Figure 1, you can see that my NAS appliance is configured to do this automatically by default. 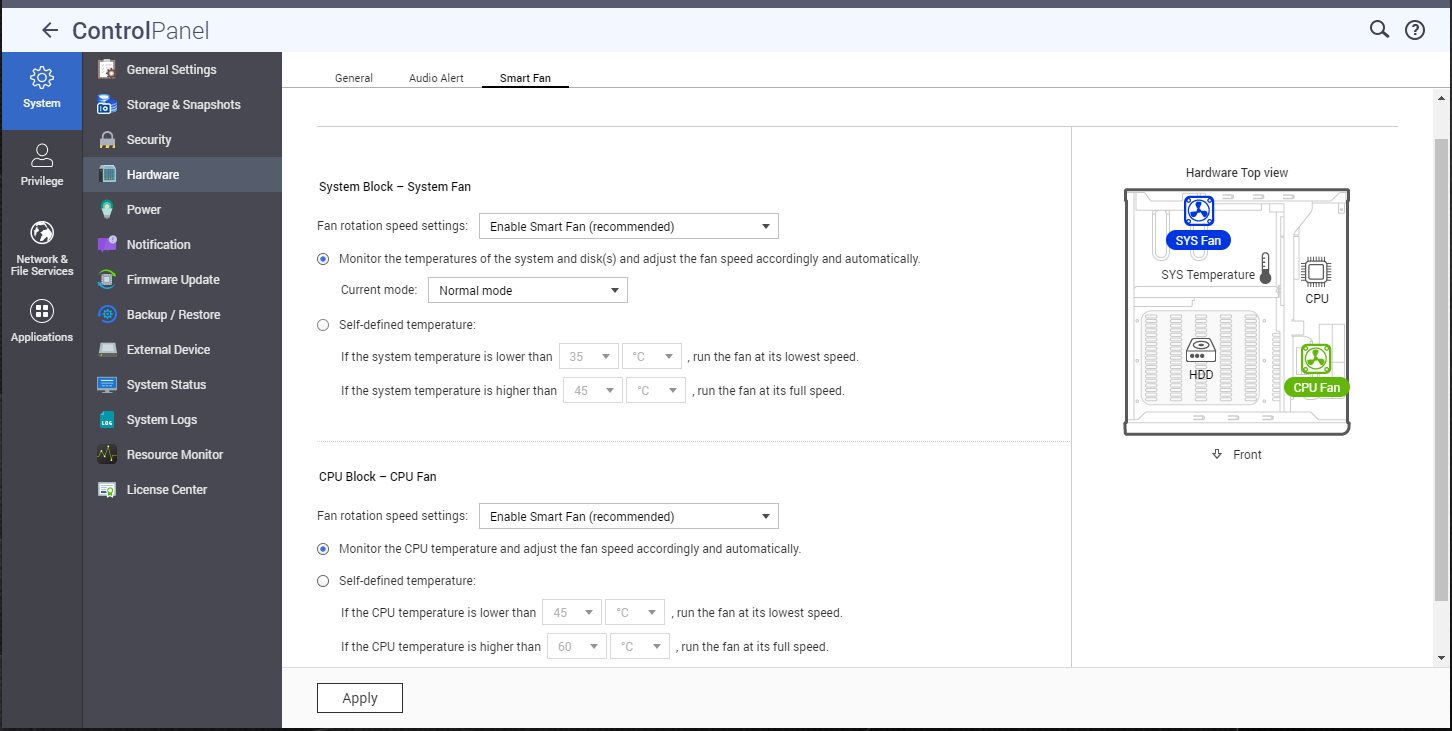 The NAS appliance automatically increases the fan speed as the temperature increases.

As nice as this particular feature may be, it is left up to the NAS appliance to determine what an acceptable temperature is and at what point additional cooling is needed. As you can see in the figure, however, it is possible to manually specify temperature thresholds for both the CPU fans and for the case fans.

Incidentally, many NAS appliances allow you to view current temperatures, and you can use this information to establish cooling thresholds. If you look at Figure 2, for example, you can see that my hottest disk was 120 degrees and my case fans were running at about 1100 RPMs, which is about half of their maximum speed.

Figuring out the speed at which you should increase a fan’s rotational speed will always be a bit of a guessing game. However, hard disk manufacturers will generally list the maximum operating temperature among the drive specs. In my case, for instance, I have Seagate drives installed in my NAS appliance. A quick check of the datasheet for the disks indicates that the hard disks that are installed in my NAS have a maximum operating temperature of 140 degrees F (60 degrees C). This is useful information when determining the temperature at which the fans should be sped up. 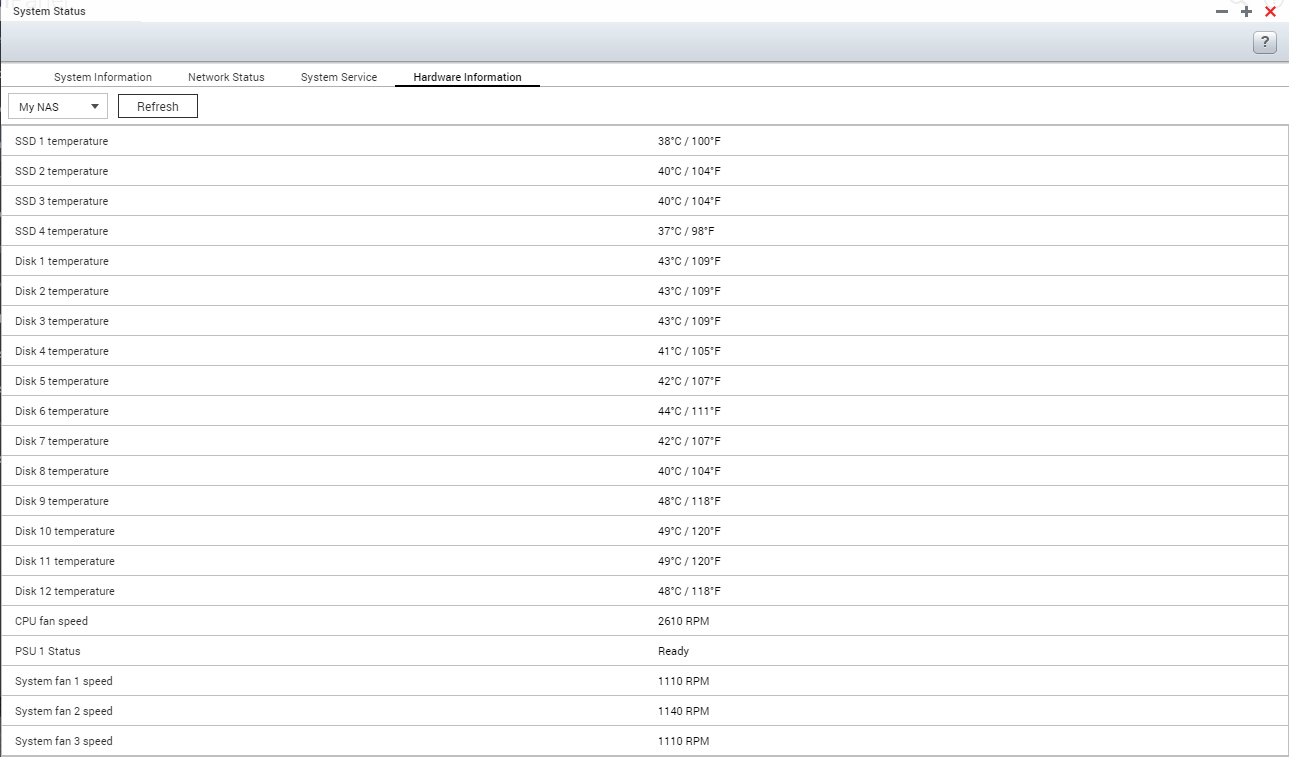 Many NAS appliances will tell you the temperature of each disk.

Depending on the make and model of your NAS appliances, there may be other things that you can do to keep the temperature in check. Some appliances, for example, have an option to perform an automatic shutdown if a device begins to overheat.

There may also be other things that you can do to help keep your NAS cool. For instance, there may be power saving features that you can leverage in an effort to keep the appliance cool. If there is enough physical space in the appliance, you might even be able to add liquid cooling.