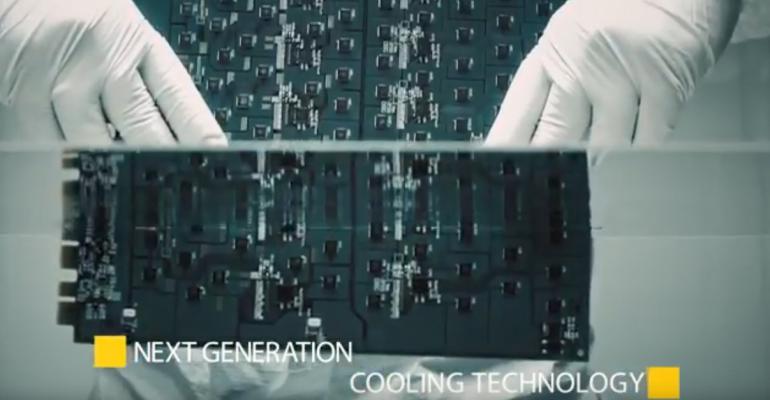 Crypto markets have cratered this year, but there’s still a race to get the last of the 21 million mineable Bitcoins. It’s a high-stakes contest that’s spawned a land rush for sites to house the energy-sucking supercomputers and their cooling systems.

Blake Schmidt (Bloomberg) -- Cryptocurrency miners have tried just about everything to keep their super-fast machines cool. They’ve moved them to Siberia and submerged them in vats of oil. One startup buried its mining rigs in a chilly Soviet-era bunker beneath the Eurasian steppe.

But even by crypto industry standards, the 40 megawatt plant Bitfury built in Georgia’s capital of Tbilisi is exotic. It submerges the computers in a non-conductive liquid to keep them chilled as they make millions of calculations a second. Bitfury said in February that it sold the plant to a Hong Kong-listed fintech company backed by a Chinese shadow banker in a deal that was conceived on Richard Branson’s private Caribbean resort, then bought it back at a discount.

Crypto markets have cratered this year, but there’s still a race to get the last of the 21 million mineable Bitcoins. It’s a high-stakes, fast-moving contest that’s already created a couple of billionaires, led to a flurry of crypto-miner initial public offering bids, and spawned a land rush for sites to house the energy-sucking supercomputers and their cooling systems.

Bitfury is the biggest player after Bitmain Technologies Ltd., the Beijing-based firm that’s planning an IPO in Hong Kong. Mainly a tech-hardware company, Bitfury has the most aggressive immersion-cooling capabilities, which it employs at the Georgia plant and at another data center it’s expanding.

Related: What’s All This About Liquid Cooling in Data Centers?

During a rare visit to the Georgia facility in July, the highly-engineered fluid swirled around miners in 160 cooling tanks. The nondescript factory, distinguishable only by Bitfury’s big cat logo, is surrounded by smaller mining operations with a view of the Caucasus Mountains.

“We realized early on that high-powered data centers would be used for everything from internet searches to securing the Bitcoin blockchain,” Bitfury Chief Executive Officer Valery Vavilov said in an email reply to questions, adding the immersion cooling technology cuts energy consumption and space requirements at the center. “Our mining operations are still profitable and we are bullish on Bitcoin in the long-term.”

The former Soviet republic at the intersection of Europe and Asia has become the world’s second-biggest host of mining facilities, largely due to Bitfury’s footprint. Crypto miners are drawn by cheap land and electricity costs as well as tax incentives in a country the World Bank ranks as being in the top 10 for ease of doing business.

In China, the biggest host of such facilities, farms are concentrated in remote areas, particularly in Sichuan province, where miners struck deals with local power stations, according to a study by Cambridge University’s Centre for Alternative Finance.

Bitfury helped put Georgia on the crypto world’s map and has used it to win deals for other blockchain services, such as supporting elections in Ukraine. It’s the landlord at the tax-free zone where the data center operates, and has created a blockchain-based land titling project. Bitfury’s deputy chairman, George Kikvadze, is a Georgian who doubles as an adviser for the Georgia Co-Investment Fund, an early backer of the firm.

When Bitfury’s Vavilov visited in 2013, he was wined and dined by Remi Urumashvili, now the company’s representative in the country.

“I gave my understanding that taxation would be, like, zero,” Urumashvili said in an interview at a cafe overlooking Tbilisi. “Then two weeks later we got a big email saying they want to open a data center.”

The country will get more exposure as a mining hub this month. Bitmain is holding a conference in Georgia, where visa-free entry and proximity to Russian clients are among the draws, spokesman Nishant Sharma said.

Bitfury is closely held and doesn’t break out cost savings from the technology. But Kar-Wing Lau, founder of Allied Control, the immersion-cooling systems company acquired by Bitfury, said it cuts by one-third the space needed to house a mining farm. Bitfury is betting the technology will be in demand from cloud-computing companies in urban areas and by the kind of speed traders profiled in Michael Lewis’s book “Flash Boys,” who position hardware as close to stock exchanges as possible to carve out milliseconds for faster transactions.

Crypto miners working to win digital tokens by solving math problems can generate enough heat to warm a house -- giving rise to a new market for "crypto heaters." The cost of keeping the computers cool makes mining more expensive -- to the point where a Bitcoin, on average, trades below the break-even cost of mining one, according to Fundstrat Global Advisors.

Bitfury’s cooling systems use a 3M Co. liquid called Novec, which has been used effectively for everything from extinguishing race car fires to extracting water in the desert. Former 3M executive Michael Kelly once called it a “magic material” for its many uses, and black barrels of the stuff line the hallways of the Tbilisi facility. Bankers and data geeks who got wind of the plant have made the pilgrimage to see the crypto cold therapy for themselves, Kar-Wing said.

Bitfury has found itself enmeshed in local political intrigue. A fund founded by Georgia’s billionaire ex-Prime Minister, Bidzina Ivanishvili, backed the company. When the plant was sold, his foes alleged he was profiting from the deal while taxpayers were stuck with the bill for incentives. They also scrutinized the factory’s energy costs.

Lawmakers also have called for a probe of the fund’s links to a Georgian politician whose son was indicted in a massive financial hack case in the U.S., a scheme that included an illegal Bitcoin exchange. George Bachiashvili, the CEO of the Ivanishvili-backed fund, said he was unaware of any investigation. The prosecutor’s office didn’t respond to a request for comment.

Politics weren’t a consideration in Bitfury’s decision to sell the plant, Bachiashvili said. Rather, the firm was looking to cash in on high-flying crypto prices.

“In hindsight, it was the right thing to do,” he said. “But at the time you never knew if Bitcoin will go up or down.”

Talks to sell the factory began in 2015 during an event on Branson’s private beach resort in the British Virgin Islands. It was there that Yew Kiat Phang, the CEO of Chong Sing Holdings, a Hong Kong-based financial services company, said he met Vavilov and Kikvadze.

Chong Sing had been on acquisition spree, during which it also bought WeShare, an online lending platform now boasting 27 million registered users. As China’s peer-to-peer online lending market collapsed amid warnings from regulators following a string of scandals, Chong Sing’s stock price halved in three months. WeShare’s transaction volume dropped to 6 billion yuan ($877 million) in the first half from a record 63 billion yuan in all of last year.

Phang said he sprang into action, cutting exposure to online lending, as well as to crypto assets and the Georgia mining plant in a bid to rein in risk.

“Capital markets haven’t been kind to any fintech company from China,” he said in an interview. “I needed to de-risk."