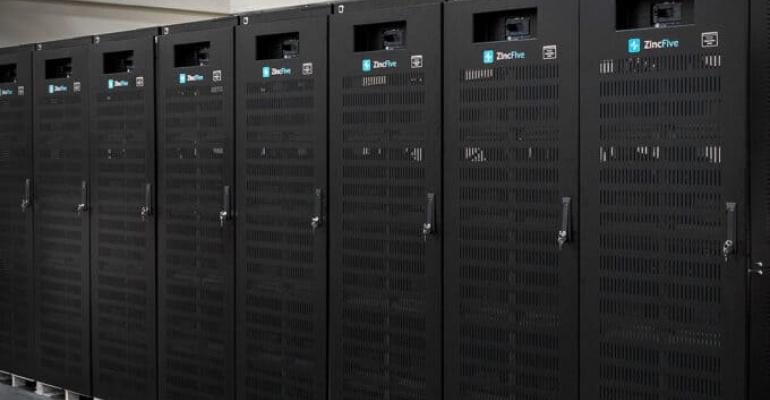 The campus would be the first in the world to use nickel-zinc batteries as its sole source of backup energy storage.

Data center developer Wyoming Hyperscale White Box is planning to equip its upcoming data center in Aspen with UPS batteries based on nickel-zinc chemistry – an alternative to lead-acid and lithium-ion batteries typically used in data centers.

The specialist battery cabinets were developed by Oregon-based startup ZincFive, which has long maintained that nickel-zinc represents a cleaner, safer battery option with higher power density.

Wyoming Hyperscale is looking to deliver up to 30MW of capacity in the first phase of the Aspen project, with energy supplied by a nearby geothermal plant, and hopes to kick off construction later this year.

Out with the old

ZincFive started out in 2016 by making rechargeable nickel-zinc batteries for traffic control systems, but quickly identified an opportunity to use the tech in data centers, and launched its first UPS system in 2018.

According to the company, the advantages of nickel-zinc chemistry include smaller footprint, minimal maintenance requirements and higher reliability – as well as lower end-to-end climate impact.

Nickel-zinc cells have been around for more than a century – they were originally invented by Thomas Edison – but their applications have been limited due to a low number of charge cycles, an issue ZincFive claims to have solved.

The company has been awarded more than 90 patents to date, and recently doubled its total funding, raising $33 million in equity investment in April 2021. Its UPS systems have been trialed by a number of data center operators including QTS and at least one of the world’s three largest cloud providers.

The latest company to sign up for the exotic tech is Wyoming Hyperscale – a relatively new venture established by brothers Brady and Trenton Thornock to transform some of the land owned by their parents' land holding company into a hyperscale data center destination.

The site, just below the north face of Aspen Mountain, benefits from nearby fiber links, naturally cool climate, renewable power sources, and the state’s zero data center sales and use tax.

The Thornocks say the data center design is fully compliant with latest OCP-Ready and LEED specifications. Each of the four phases would deliver 30MW of power capacity across three data halls, using a dedicated on-site substation with 120MW design capacity. The necessary building permissions were granted in February 2021, but it is not immediately clear who will be funding the project.

Nickel-zinc batteries are not the only data center innovation being embraced by Wyoming Hyperscale – in April 2021, the company announced a partnership with immersion cooling specialist Submer, looking to use its SmartPodXL+ systems to reduce data center energy consumption.

“This project will showcase to the world cutting-edge technologies that can take data center sustainability to new heights,” Trenton Thornock said. “We’re excited to take advantage of the environmental benefits provided by ZincFive’s sustainable battery solution, as well as their benefits in terms of performance, reliability and exceptional safety.”