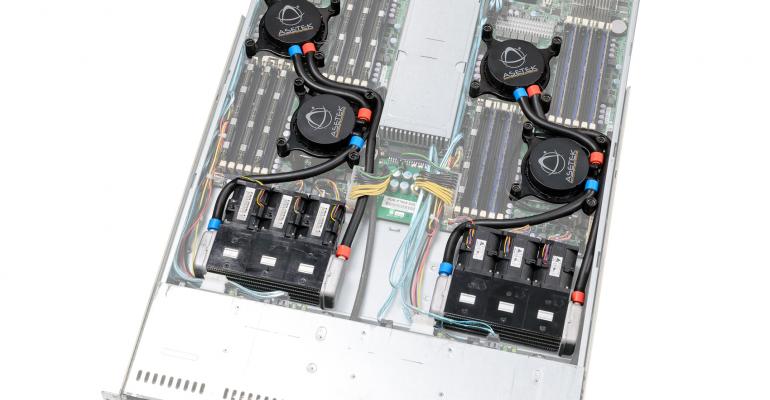 Asetek, the Danish liquid cooling company whose stock value has been rising faster than any other company’s on the Oslo Stock Exchange, pushed primarily by the e-sports resurgence, will supply cooling systems for a supercomputer NEC is building for a customer in Japan, the company announced Tuesday.

While e-sports-driven growth in PC sales is what’s gotten Asetek so much investor attention, its CEO and founder, Andre Eriksen, said he thinks demand in the data center space is what will drive the next wave of growth for the company. Asetek’s announcement in September that it had secured a partnership with a major data center technology supplier – whom it did not name – was expected to push the stock value even farther on speculation that the partner was Intel.

An analyst told Bloomberg Asetek’s stock would drop if it turns out that the partner (or OEM, as it’s referred to in Asetek’s announcement) is not Intel. The deal is for a data center product expected to be rolled out in November, according to the Bloomberg report.

While desktops are responsible for more than 90 percent of its revenue, Asetek has had a steady stream of orders from channel partners for systems that go into data centers, and the NEC deal is one of them. Many of the orders are for partners suppling supercomputers to government agencies, including US departments of Energy and Defense.

Various liquid-cooling technologies enjoy widespread use in the traditional high-performance computing space, but they may see a new source of growth in the rapidly developing field of AI. Deep learning, the most prevalent method of training AI systems, requires a lot of computational muscle delivered in the form of GPUs, and the typical hardware systems used for this purpose are gaining on supercomputers in terms of power density.

Hyper-scale data center operators, such as Facebook or Microsoft, typically spread their GPU clusters over more square footage to address the power density issue, Rob Ober, chief platform architect for accelerated computing at Nvidia, supplier of the majority of GPUs used for deep learning, told us in an earlier interview. Some operators use liquid-based rear-door heat exchangers to pack more computing power into a single rack, and some “dabble” in direct liquid cooling like Asetek’s, where chilled water is brought directly to the chip.

As more businesses start using deep learning in their operations, demand for direct liquid cooling may rise, since most enterprises don’t use data centers as massive as the hyper-scale server farms and will want to pack as much computing power in a square foot of data center space as they possibly can. But that will depend on how many of those enterprises will opt for on-premises GPU clusters versus using cloud services hyper-scalers are quickly building out specifically for these types of applications.