Larry Ellison's battles in US courts and presidential courtship are all part of a high-stakes gamble to revive Oracle's anemic revenue growth.

It’s all part of a high-stakes gamble to revive Oracle’s anemic revenue growth, which has averaged about 1% a year since 2012, and regain relevance in the face of a widening phalanx of upstarts eroding the company’s dominance in the business software market.

Related: Oracle Falls Most in a Year After Tepid Outlook for Growth 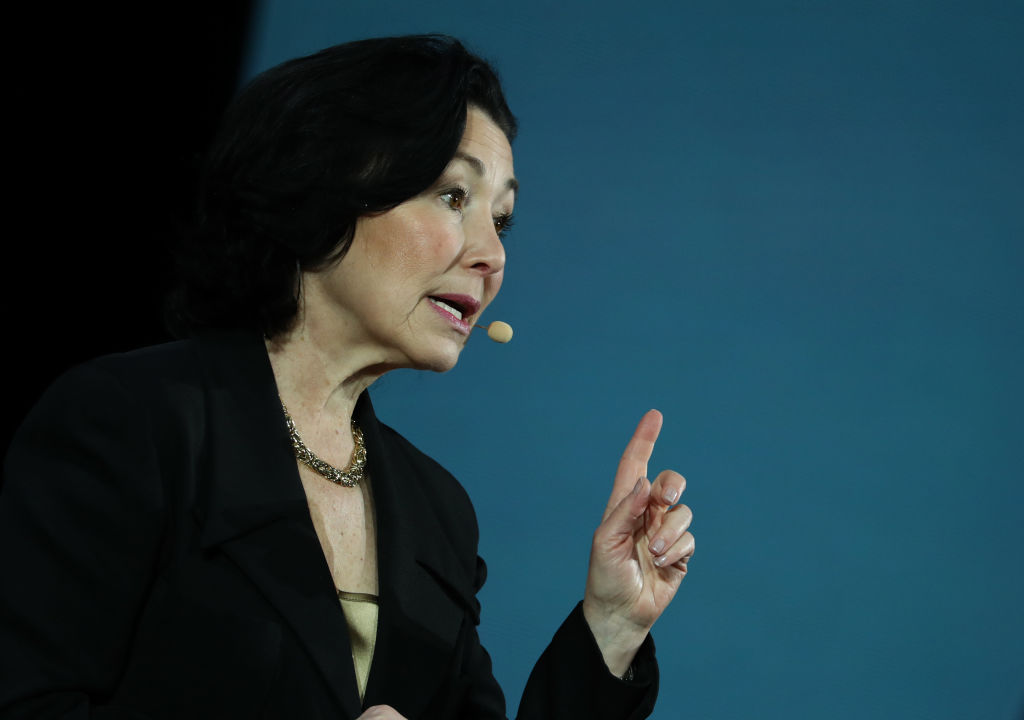 The trio of defeats underscore the limits of a strategy that relied on Oracle’s ties to the Trump White House and other politicians and ratchet up the pressure on Ellison and Chief Executive Officer Safra Catz to find ways to keep the existing product lineup vital.

“They’re just throwing everything against the wall at this point to see what sticks,” said Anurag Rana, an analyst at Bloomberg Intelligence. But to improve its fortunes, Oracle will have to focus on the fundamentals of its software business. “The big issue for them is how to revive growth and it does not look like much is happening on that front,” he added.

Despite its sprawling product lineup of software, services and data-center hardware, Oracle is simple to understand. At the end of the 1970s, Ellison pioneered a new way of storing and processing information – the Oracle relational database. The program vaulted the company to the forefront of the technology industry. Ever since, he has sought to protect and expand the lucrative business that counts spy agencies, government departments and some of the world’s largest corporations as clients.

This emphasis on his foundational product, the database, blinded Ellison to the full implications of the shift to cloud computing that has been under way for two decades. Database customers traditionally kept and managed the product on their corporate computer servers, and paid customer-support fees to Oracle each year. Those maintenance costs sometimes had a profit margin of more than 90% for the software maker, a former executive said. A shift to the cloud -- where companies rent space in powerful servers to store and process information over the internet -- meant sacrificing a good chunk of existing revenue and profit, at least in the short-term.

Two of the deals Oracle sought -- with the Pentagon and ByteDance Ltd.’s TikTok -- would have generated billions in revenue and made the company, almost overnight, a viable competitor in providing those cloud services with market leaders Amazon.com Inc. and Microsoft Corp.

Still, investors appear sanguine as the company cranks out profits and dividends. Oracle shares gained 22% in 2020 and increased another 17% this year to a record $75.58 at Friday’s close.

For years Ellison, who is now worth about $89 billion, stayed away from politics, describing himself as politically “dispassionate” and a “centrist.” He supported Democrat Bill Clinton in the 1990s. One of the issues he cares most about is economic growth, which is good for his business.

Like many government contractors, Oracle has regularly lobbied for intellectual property protections and a strong national defense. But as the company faced growing business challenges in the past decade, it began using political levers to undercut competitors.

In 2008, Charles Phillips, then one of Oracle’s presidents and its most senior Black executive, supported Democratic U.S. Senator Barack Obama in his presidential campaign against Republican Senator John McCain. Phillips held a fund-raiser for Obama at a hotel, and while some Oracle employees attended, Ellison and Catz weren’t among them, a person familiar with the situation said. Catz had long been politically conservative, two people said.

Obama’s election coincided with a changing technology landscape. Companies that had become centers of power from selling complex tech systems -- Oracle, International Business Machines Corp. and Hewlett-Packard Co. -- were displaced in prominence by internet companies such as Google, Facebook Inc. and Amazon. Oracle wasn’t close to the Obama administration like those at Google, for example, who had 363 meetings at the White House from Obama’s inauguration to October 2015, according to administration records.

Back into the Action

After years on the sidelines in Obama’s Washington, Ellison and Catz took a keen interest in the 2016 presidential race. Both supported Republican Senator Marco Rubio from Florida, whom Ellison later described in a Fox Business interview as a “centrist.” Ellison gave $4 million to a political action committee backing Rubio. But when Donald Trump won the Republican nomination, the executives quickly got on board.

Catz led the effort to build a closer relationship with Trump. The month after the presidential election, Catz made a pilgrimage to Trump Tower with Oracle executives including Ed Screven, the company’s chief technology architect, and her deputies Douglas Kehring and Ken Glueck, the lobbying head. Catz then joined the president-elect’s transition committee.

During the former president’s tenure, Catz visited the White House to attend meetings and privately dined with the president alongside Peter Thiel, the billionaire Palantir Technologies Inc. co-founder who was Trump’s most prominent Silicon Valley backer in 2016. At that dinner, Catz criticized the selection process for a pending Pentagon cloud contract worth $10 billion, which Oracle wanted.

The contract, called Joint Enterprise Defense Infrastructure, or JEDI, was a decade-long opportunity to provide public cloud services for the U.S. military. For Oracle, whose cloud service has been so unpopular that it was called “niche” by industry analyst Gartner Inc., the deal could have helped it begin to catch up to Amazon and Microsoft. The two cloud leaders were also vying for the contract as was Google, which later dropped out of the bidding after employees protested the company doing military work.

Catz found the opportunity so tantalizing that she told her staff they would need to take an all-hands-on-deck approach to winning the procurement process, people familiar with the situation said.

The problem was that Oracle didn’t have the technology requirements to be eligible for the deal. It was eliminated from consideration in 2019. The company later sued and appealed, but to no avail. It lost its last appeal in September.

The only victory was schadenfreude. Oracle waged a campaign to cast aspersions on the fairness of the process, and alleged that some Pentagon officials were biased in Amazon’s favor because they previously worked there. In the end, Amazon Web Services, which was widely seen as the front-runner for the deal, lost out to Microsoft. But even that result isn’t final. The Pentagon said last month it may decide to drop the contract if litigation pursued by Amazon -- alleging it lost the deal because of Trump’s opposition -- proceeds.

While Oracle’s links to Trump didn’t secure the JEDI contract, Amazon became a mutual enemy for both for the duration of his presidency. Amazon has moved into Oracle’s territory in databases, transitioned from using Oracle’s products and has been targeted for criticism by Ellison in public appearances. He has slammed the cloud leader’s technology, saying it’s unsophisticated and overpriced.

To further burnish his ties to Trump, Ellison let the then-president host a re-election fundraiser just before the coronavirus hit at Ellison’s estate in Rancho Mirage, California, which features a golf course. Trump called Ellison “a tremendous guy” and Oracle a “great company,” while Ellison praised Trump’s handling of the economy.

Then, TikTok -- a video-streaming company with huge computer processing needs -- came into play.

Trump went after TikTok last August, saying the Chinese-owned app known for dance crazes and lip-syncs posed a national security threat and must be sold. Microsoft publicly made a purchase offer, but General Atlantic, a TikTok investor, reached out to Ellison, a person familiar with the situation said, knowing he had cultivated close ties with Trump and hoping he had the standing to pull off a deal.

Ellison recognized that ByteDance, TikTok’s owner, wanted to keep a piece of its crown jewel, and unlike Microsoft, he didn’t want full ownership of the video app. ByteDance had been considering some form of a corporate reconfiguration for its U.S. assets to allay American government concerns and Oracle convinced ByteDance it could get Trump to back that type of arrangement.

Through personal conversations with ByteDance CEO Zhang Yiming and Trump, Ellison persuaded TikTok to agree to a shotgun wedding under threat of being banned from the U.S. A preliminary deal announced in September and blessed by Trump named Oracle as TikTok’s technology partner. The software company planned to provide cloud services to the video-sharing app and protect the data of its U.S. users. Oracle also was set to take a 12.5% stake in a new U.S. entity formed by China-based ByteDance, but would have had no role running the new company.

Mark Moerdler, an analyst at Sanford C. Bernstein, said at the time that it could have been “quite valuable to Oracle,” providing “revenue at a nice profit margin, plus all of the credibility of being not only a core cloud provider for Zoom, but also for TikTok.”

But Oracle’s ally Trump lost his re-election bid against former Vice President Joe Biden. In the waning days of the administration, Trump lost interest in his battle against TikTok, instead focusing his attention on his doomed effort to overturn the election results.

TikTok never signed a final agreement and the deal remains stuck in limbo while the Biden administration conducts a review. There is no indication TikTok’s Chinese owner will be forced to go through with the sale.

In the time since, Oracle’s effort to restore its relevance has seen another setback. The company announced tepid financial results in March, highlighting its inability to break out of its sales-growth rut.

Ellison spent much of the earnings call tearing into fellow enterprise technology titan SAP SE, listing companies that have switched to Oracle from the German company.

One name he didn’t mention was Google, which said April 5, the day the Supreme Court rendered its verdict, that it would abandon Oracle’s financial software and move to SAP.