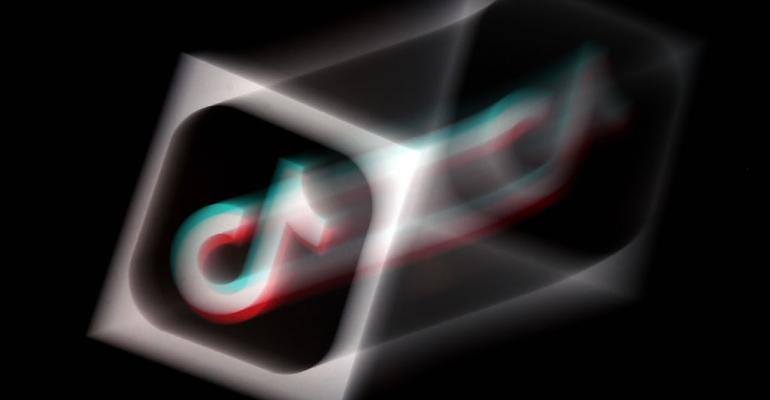 The company’s possible pursuit of a deal for the social network, owned by China’s ByteDance Ltd., makes more sense in light of Oracle’s desire to build up its cloud-computing and consumer-data businesses.

(Bloomberg) -- Oracle Corp.’s preliminary interest in making a bid for TikTok, on first glance, looks like an awkward fit -- the 43-year-old software giant best known for legacy corporate databases and the music-video sharing app beloved by teens seem as different as two companies can be.

But the match may not be as far-fetched as it first appears. The world’s second-largest software maker has approached investors including Sequoia Capital to partner on a bid for TikTok’s business in the U.S., Canada, Australia and New Zealand, people familiar with the matter told Bloomberg late Monday.

The company’s possible pursuit of a deal for the social network, owned by China’s ByteDance Ltd., makes more sense in light of Oracle’s desire to build up its cloud-computing and consumer-data businesses -- and comes into even clearer focus considering Oracle’s close ties to U.S. President Donald Trump and Chairman Larry Ellison’s cheerleading for American tech interests.

Microsoft Corp. has been seen as the front-runner in the race to acquire TikTok’s U.S. assets, and is the only company to publicly confirm talks with ByteDance. Trump told reporters Tuesday that Oracle also is interested in TikTok and “could handle” a purchase of the service.

The president on Friday ordered ByteDance to sell its U.S. assets within 90 days, adding to an earlier executive order that would prohibit U.S. persons and companies from doing business with TikTok effective 45 days from Aug. 6.

While Microsoft at first seemed like an unlikely suitor, the company already has consumer-facing units -- gaming platform Xbox and LinkedIn, a social network for business professionals. Oracle and Microsoft are peers founded in the 1970s, but Microsoft has seen a resurgence because of its success in cloud computing. Oracle, meanwhile, has experienced stagnant sales and reduced relevance, and could badly use a win in the cloud-services market.

TikTok has more than 100 million users in the U.S. When the company separates its technology from ByteDance, it will need to find new places to store the huge amount of data generated by these users. The app could be an anchor tenant for Oracle’s Cloud Infrastructure unit, which hosts client information, but has struggled to keep up with rivals Amazon.com Inc. and Microsoft. Oracle has seven data-center regions for businesses across North America and Australia. The company has declined to comment on its potential interest in TikTok.

Oracle is “one of the other players with the infrastructure to support an ecosystem and user base as massive as TikTok,” said Daniel Elman, an analyst at Nucleus Research. Forgoing payments to external cloud vendors could save TikTok “billions annually,” he said.

While Oracle doesn’t have any consumer-facing business, Ellison has sought a piece of the lucrative ad-targeting market with the company’s Data Cloud, which includes a data-brokerage business that creates profiles of ordinary people and sells them to advertisers. The billionaire co-founder has boasted about how his trove of consumer data is second only to Facebook Inc., and has said that Oracle needs to help businesses target their customers “better than competitors.”

The unit has struggled since the European Union’s data-privacy law, GDPR, went into effect in 2018, and the company curtailed its practice of tracking consumers in the region. Facebook also changed its ad-targeting practices after the Cambridge Analytica data scandal, making it harder for third parties like Oracle to help advertisers find niche audiences. Oracle fired around 5% of the division’s staff in 2018. In June 2019, the company said that revenue had fallen 15% in the unit. A month later, the division’s leader, Eric Roza, departed the company.

TikTok could spearhead a resurgence for the division, giving Oracle information about consumers that would be useful to advertisers, and also offer a platform where those clients could run their ads -- dramatically simplifying the process. ByteDance would still control TikTok’s European business, so Oracle wouldn’t have to worry about GDPR, but it would face all the other challenges of running a social-media company, including having to remove inflammatory and violent content and answering to U.S. lawmakers increasingly worried about consumer privacy and social-media disinformation. The company has little experience in this area and may face a more hostile administration if Trump loses re-election after Oracle secures a TikTok deal.

Oracle is a rare Silicon Valley company with close ties to the president, even partnering with the White House on an effort earlier this year to track the effects of using hydroxychloroquine to treat Covid-19. Ellison and Oracle Chief Executive Officer Safra Catz personally support Trump’s re-election effort. Ellison has also emerged as a China hawk, saying in 2018 that it’s important the U.S. “wins the battle with China” and deciding to significantly reduce Oracle’s footprint in the country. Snatching TikTok’s American business would blunt Chinese progress in the U.S. tech market.

Then there’s the matter of scale. Oracle, with $43 billion of cash and securities on hand, could easily fund a TikTok acquisition, which is estimated by bankers to be valued at $20 billion to $50 billion. After years of being acquisitive, Oracle has slowed its deals recently, saying it has all of the technology it needs to grow. Now, it seems even 76-year-old Ellison isn’t immune to the TikTok phenomenon.