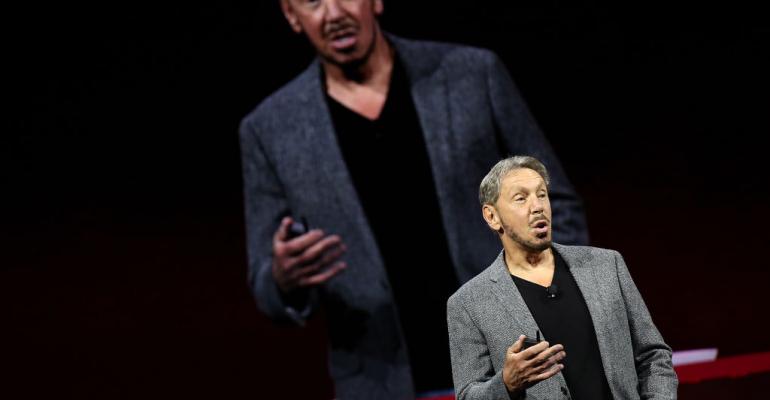 Its legacy install base is a leg up, but the company has been shy to spend big on scale, while its cloud marketing message remains fuzzy.

Oracle is making a big bet.

The company is betting that it can carve out enough enterprise cloud market share to make up for slowing demand for its on-premises software. And the bet’s success appears to revolve to a great extent around its database. Oracle is betting that its database leadership is strong and sustainable enough to draw companies to its cloud platform versus cloud leaders Amazon Web Services and Microsoft Azure.

Not that the company didn’t roll out a host of non-database products last month at OpenWorld – it did. But the amount of emphasis co-founder and CTO Larry Ellison placed in his keynotes at the conference on its Autonomous Database and its biggest rival in the cloud market, Amazon Web Services, painted a picture of a company that really wants to become a big player in cloud and sees its main product – the biggest reason it’s still relevant – as the ticket to getting there.

And it’s easy to understand why it sees it that way. As a latecomer to the cloud market, Oracle is far behind AWS and Azure both in breadth of features available on its cloud platform and in scale of its cloud infrastructure. While its cloud software rollout has been aggressive, it’s been relatively shy to invest in infrastructure – especially when compared with the amount of investment the two market share leaders and Google Cloud Platform are making.

In its massive database install base, Oracle has a leg up. For an enterprise customer who’s been invested in a database for many years, switching to a different one is extremely difficult and can be disruptive to the business. Oracle offering a way to move to a cloud platform without having to switch to a whole new database technology should sound tempting to enterprise CIOs.

‘Everything Else Goes to Azure’

However, even if a CIO chooses Oracle’s cloud to ease the pain of migrating to a cloud database, there’s no guarantee they will choose Oracle for all – or any – other things cloud. Take Gap, for example, one of Oracle’s big enterprise customers whose IT leadership spoke at length about their experience migrating to Oracle cloud at the conference.

AWS was not an option, since Amazon competes with Gap in the retail market, Fakir Nooruddin, Gap’s VP of IT, told Data Center Knowledge in a conversation after his session. But at least for the foreseeable future, Gap’s use of Oracle cloud will be limited to Oracle database. “Everything Oracle-database related goes to Oracle,” Nooruddin said. “Everything else goes to Azure.”

On stage at OpenWorld, Ellison spent a lot of time knocking AWS. Arguably, however, it’s Azure that Oracle should be worried about more. Like Oracle, it’s a massive software company with a huge legacy enterprise install base. The two are going after many of the same customers. Oracle may be focusing on AWS because it’s the leader in cloud, but that does little to persuade enterprise users to choose Oracle’s cloud versus Azure, whose parent company commands a lot of attention among companies that comprise Oracle’s install base.

So far, Azure is far ahead in an area that’s one of the biggest weaknesses in Oracle’s current cloud proposition: scale. Today, customers can choose from a list of 54 Azure regions worldwide, covering every major market in the Americas, Asia-Pacific, and EMEA. Oracle’s new cloud platform, Oracle Cloud Infrastructure, is available in four regions, slated to reach 13 next year.

It takes a long time and a lot of money to build data centers to host those availability regions. AWS, GCP, and Azure have each been spending billions on new infrastructure every quarter in recent years. “Are they (Oracle) willing to open up the checkbook and do that?” Sid Nag, analyst and senior director at Gartner, said in an interview with Data Center Knowledge.

Even though Oracle launched its new cloud platform (designed by many of the same engineers who were involved in building AWS, Azure, and GCP) in 2016, this year’s OpenWorld was somewhat of a coming-out party for OCI. The Infrastructure-as-a-Service layer appears “solid from an engineering perspective,” Nag said, but scale matters a lot, and “they have a ways to go before they get there.”

OCI underpins both Oracle’s raw cloud infrastructure services and the growing list of its software offered as a service. An aspect of its new platform the company touted a lot at the show was an architecture that physically separates all the code involved in managing the infrastructure from customer data. There’s a dedicated network of servers just running the management layer, which, according to Ellison, prevents customers from hacking into other customers’ systems by gaining access to the control layer. “They can’t hack our cloud-control computer, because there’s no way to access it,” he said. “Threats can’t enter, and threats can’t spread. It’s a big deal.”

An AWS spokesperson did not respond to an email seeking comment on Ellison’s claims.

Whether this will be enough to impress customers is an open question. Many customers actually want visibility into the infrastructure control layer, Nag pointed out. At a minimum, they want to know details of the architecture before they can trust it to run critical applications. “Who are you, Mr. Oracle? Why should we trust you?” he said.

Even if existing users of Oracle database and business applications sold as cloud services find OCI messaging convincing, selling to the install base is hardly a good long-term strategy. Whether Oracle cloud can attract net new customers is a big question. So far, the company doesn’t appear to be getting a lot of traction in that department, Nag said.

Overall, companies that win in this market (and other markets) are those who can both build solid technology and “position their story.” Oracle cloud’s play on the technology side appears strong, but it’s difficult at this point to discern a “comprehensive, holistic message,” Nag explained. “I don’t think that they have all that figured out yet.”