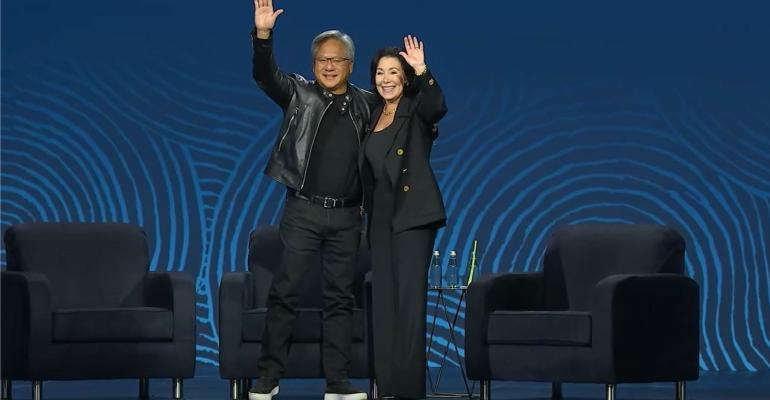 Oracle is collaborating with Nvidia to strengthen Oracle Cloud’s artificial intelligence capabilities by adding tens of thousands of additional Nvidia GPUs and adding support for Nvidia AI Enterprise, a software suite designed to make it easier and faster for enterprises to deploy AI workloads.

Oracle Cloud previously offered clusters of up to 512 GPUs. Soon, customers can go to Oracle Cloud to access thousands of GPUs to train their machine learning models.

“We have customers that want thousands of nodes,” Leung said in an interview with Data Center Knowledge. “More and more horsepower is required to build more accurate models.”

Oracle on Tuesday also announced new services to simplify management, security and development in the cloud, including a managed serverless Kubernetes service for customers that want to build containerized applications without having to manage the Kubernetes infrastructure, Leung said.

The company also announced a new service called “Oracle Alloy,” in which Oracle will build cloud instances for systems integrators, telecommunications companies and managed service providers, so they can resell the cloud services to their own customers.

The common theme of Oracle’s CloudWorld announcements is simplicity, Leung told DCK. “It’s all about making adoption of the cloud easier and simpler across our range of customers.”

Analysts say the broad set of announcements at CloudWorld helps Oracle beef up its portfolio of services as it competes against the likes of Amazon Web Services, Microsoft Azure and Google Cloud in the cloud space.

“Oracle has been making significant investments in its cloud business as it repositions itself from the best place to run Oracle workloads to a full-service public cloud provider,” said Dave McCarthy, IDC’s vice president of cloud and edge infrastructure services.

Alexander Harrowell, Omdia’s principal analyst of advanced computing for AI, said Oracle’s AI announcements with Nvidia are substantial but not revolutionary. AWS, Azure and Google Cloud are also investing heavily in AI services and have partnerships with Nvidia as well.

“Oracle, as a challenger to the big three, is understandably keen to match the product range they offer,” Harrowell said. “It’s logical to target the fastest growing and highest margin products first. Flagship server GPUs for AI, and software tools to help make use of them, are those products.”

Oracle and Nvidia executives on Tuesday said they expanded on their existing partnership to help enterprises meet their accelerated computing and AI needs.

Oracle is boosting GPU capacity in OCI with Nvidia A100 and forthcoming H100 GPUs. Oracle is currently in the process of adding GPU capacity, so additional capacity will begin to be available in the next few months, Leung said.

On the AI software front, the company will make an upcoming release of Nvidia AI Enterprise available on OCI. The software is a comprehensive set of AI tools and frameworks for developing and deploying AI applications.

In addition, Oracle is collaborating with Nvidia to provide industry-specific tools.

“AI is an area every enterprise is looking at…. Some of them are in the very early stages of their AI journey,” said Pat Lee, Nvidia’s head of strategic enterprise partnerships, in a media briefing on Monday. “So coming to Nvidia to get a full stack, end-to-end software solution that helps them in all the key steps of the AI workflow, from data preparation to training, to simulation, deployment and scale will really help drive bigger success.”

“More enterprises are looking to cloud for high-performance workloads and the ability to improve the performance of AI/ML workloads is critical,” he said.

Managed Kubernetes in the Cloud

With a new managed serverless Kubernetes service, Oracle will essentially run and manage the underlying open-source Kubernetes environment for enterprises, so they don’t have to. All they have to do is build their containerized applications.

The new Oracle Cloud offering is aimed at smaller enterprises that do not have a large IT operations team to manage the infrastructure and would rather focus on software development, Leung said.

“They want containers. They want Kubernetes, but they don’t have the expertise, so they prefer the cloud provider to manage the infrastructure for them,” Leung said. “We provision the infrastructure, keep it up to date, patch it and update the operating systems. Everything under the cover we will do. The customer only has to worry about building their code.”

Oracle will offer two serverless compute options: a new “virtual nodes” capability in its existing Oracle Container Engine for Kubernetes service, and a “Container Instances” service for customers that want to run containers in the cloud without requiring orchestration from Kubernetes, the company said.

The upshot: there is big demand for managed Kubernetes services in the cloud, he said.

“A significant majority of native application development and even re-architecting  existing applications is moving towards a microservices platform delivered by Kubernetes,” Chhabra said.

Oracle’s Leung said the company is also announcing a new service, called “unlimited mode for burstable VMs,” which allows customers to continually burst, which means using additional compute or storage resources when needed. The offering, which will be available next year, provides more simplified and precise pricing than the competition, Leung said.

According to the company, if customers only use a fraction of the CPU, they are only charged that fraction of the CPU. But with unlimited bursting, they will also have the ability to continually burst, then scale down when demand lowers. While other cloud providers have complicated pricing for bursting, Oracle’s pricing is simple, he said.

“You literally pay for what you are using. Nobody else offers that,” he said.

IDC’s McCarthy said it’s a good new feature by Oracle. “OCI has always been unique with its flexible compute shapes that allow customers to customize the resources within an instance,” he said. “Unlimited mode for burstable compute instances expands on this and provides cost savings.”