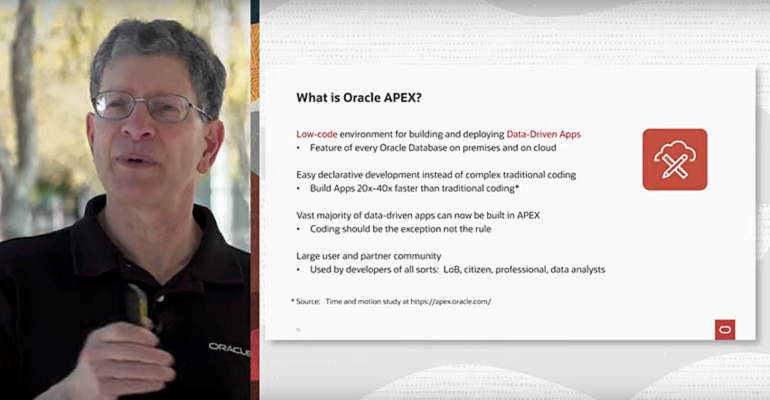 Oracle is adding a managed service option to its low-code technology to help organizations build and deploy applications.

For some vendors, low-code tooling may seem like a relatively new phenomenon, but that's not the case for Oracle. Oracle has been developing and selling its Application Express (APEX) low-code platform for a decade, and already in 2021 it has expanded it further with a new service.

On Jan. 13, Oracle announced the availability of its new APEX Application Development service, which provides the company's low-code tool as a managed service in the Oracle Cloud Infrastructure (OCI) platform. In a webcast launch for the service, Andrew Mendelsohn (pictured), executive vice president for database server technologies at Oracle, said APEX enables any type of user to build applications faster than traditional coding methods.

"APEX is a low-code development environment and deployment environment for data-driven applications or database-intensive workloads," Mendelsohn said. "It's a feature of every Oracle Database running on-premises today."

According to Mendelsohn, more than 500,000 developers use APEX, and millions of applications already have been developed with the low-code tool.

be the exception, not the rule, about how you build applications," he said.

Oracle isn't alone in its embrace of low-code application development. The market for low-code development tools has been growing in recent years, and it became particularly pronounced in 2020 with Microsoft, Google and Amazon all rolling out new services.

The new piece for Oracle is the APEX Application Development service, which takes the low-code platform and deploys it on Oracle's cloud on top of an Oracle Autonomous Database.

As such, rather than users having to manage and deploy APEX and applications developed with APEX on their own, the new offering provides an easy-to-use environment fully managed by Oracle that runs as a subscription-based service in the cloud.

As opposed to the non-cloud service version of APEX, Mendelsohn said the APEX Application Development service is fully managed and elastic, enabling workloads to scale from just 1 CPU up to as many as 128 CPUs, with storage that scales up to 500 terabytes.

"It can be used for any kind of workload — small departmental workloads that just have a few users … to huge workloads with millions of users," Mendelsohn said.