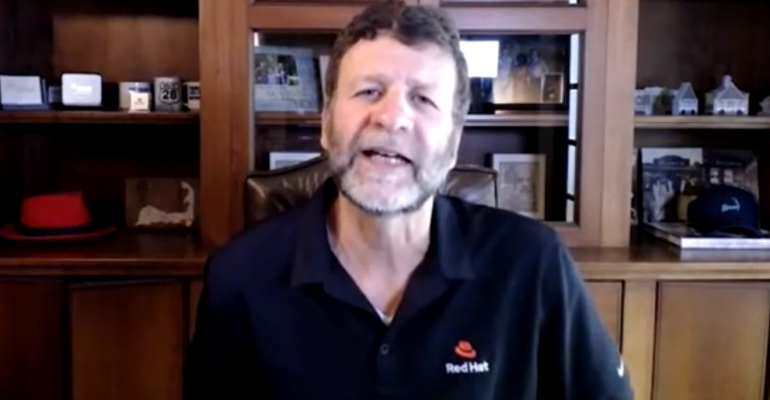 Paul Cormier recently sat down for a talk with Data Center Knowledge about how the company's relationship with its new owner, IBM, is working out and to reflect on where the company is going.

It's easy to understand how Cormier got the nod to take the reins after Whitehurst's departure. Not long after joining the company he'd been one of the people behind Red Hat's decision to drop it's consumer-targeted Linux operating system, which had been its flagship since the early 1990s, to focus on Red Hat Enterprise Linux and the enterprise. He is also said to have been central to many of Red Hat's numerous acquisitions.

Data Center Knowledge had the opportunity to talk with Cormier not long after he took the reins as Red Hat's CEO. Among other things, we asked him about Red Hat's relationship with its new owner, IBM, and about his vision for the company he now operates.

DCK: Earlier this year when it was announced that your predecessor, Jim Whitehurst, would be moving to IBM, a lot of people thought he would be keeping his position as Red Hat's CEO as well.

Cormier: That would have broken everything. We have to remain a separate entity, and that's important from both a Red Hat perspective and an IBM perspective. Even Jim said at the time it would be impossible for him to do both roles.

One of the things that's made Red Hat successful is our independence and sort of looking at us as Switzerland. We work with all the cloud providers, including IBM, Microsoft, Amazon, and Google. They all compete with each other, so you couldn't have Jim with one foot in the IBM product world and one foot in the Red Hat world, and have Microsoft or Amazon think that whatever they tell us about what's on their road map isn't going to leak over. I mean, we get Intel's super secret road maps probably five years down the road, and they compete with IBM in the chip sector. When we first did the merger, we had to prove to Intel that we, Red Hat, could put that wall up.

One of the really important things about staying separate is to preserve the ecosystem so that we have the biggest available market. No one could have had a foot in both worlds. It really would have broken that.

DCK: How important do you think it is that the new CEO was promoted from within Red Hat ranks instead of coming from outside the company?

DCK: How much autonomy does Red Hat have under IBM? If you wanted to start working on developing a new product line, do you have to get permission from IBM first?

Cormier: Nope. We kind of modeled this after the VMware/Dell relationship or the LinkedIn/Microsoft relationship. We look at IBM as our shareholders. At the beginning of the year, we work with them on the numbers -- the growth we think we can accomplish and the margin we think we can give back to the company -- and from there it's totally in our control about what we need to develop and where we need to go.

Everything we do is going to be open source. It's even sort of unspoken under the IBM umbrella that anything open source, especially in the infrastructure developer tool space, is under the Red Hat umbrella. They actually stopped a number of projects they had because they overlapped with us, and we continued with our product lines and in some cases they're selling them.

They were actually working on a really nice open source-based, multi-cloud, multi-cluster manager for containers that we took into Red Hat and it became a Red Hat product. We moved 100 engineers from IBM to Red Hat. When I say moved, I mean moved. They physically moved. They moved pay scales; they moved insurance benefits -- everything. That's how serious we both take it.

DCK: We've noticed that they're doing a big job of selling Red Hat and that one of the ways they're selling IBM now is by selling access to Red Hat.

Cormier: It is, and that's beneficial. That was one of our thought processes in terms of helping us scale. At the same time, the deal we have with them is that we won't offer anything to them, both from a product perspective and a price perspective, that we would not do for another partner, including their competitors. So that's part of the understanding as well.

DCK: How about acquisitions? Are you free to acquire other companies?

Cormier: Yep. We haven't since the merger, and we'll coordinate that through them. I do have a corporate development group and we are working on looking at a few things that would have to be run through them because they're the bank now. They're a partner, but they're also our shareholders.

We have a couple of things in mind, but I honestly don't think we're going to do anything for a little while. I mean, we have to really see how this thing plays out.

Cormier: We've been sort of on this hybrid cloud approach. We started it, really. In the beginning of public cloud, some of the first cloud guys were telling the world that every application was moving to the public cloud tomorrow. We didn't think that was practical, and it didn't turn out to be practical.

What hybrid means is a common environment, a common infrastructure, common set of tools, common development environment -- whether the application's running on a physical machine, a virtual machine, a private cloud, public cloud, containers, or across clouds. That's what we've built-to for seven or so years. So that's now really coming to fruition.

In the technology world, especially enterprise, none of these things go as fast as anyone thinks. Amazon's been around for 12 years, and like I said, in the beginning they were saying every app's going to the cloud tomorrow. That was 10 plus years ago and now it's maybe 20%-25%. So we look at public cloud as part of our customer's IT environments and not necessarily their entire IT environment. That's our vision: to keep building around this hybrid cloud platform.

DCK: Do you have a five year plan? Where would you like to see Red Hat be five years down the road?

Cormier: I think we need to be the top hybrid provider in the industry. I think we are now, but that industry is going to grow a lot. We need to be 60% plus of the hybrid cloud market in the next five years. We're probably 40% now, which is just a wild guess.

Everybody says they're hybrid and there are different definitions, but in terms of taking an application and running it across any of those environments seamlessly, there's not many that can replicate that.