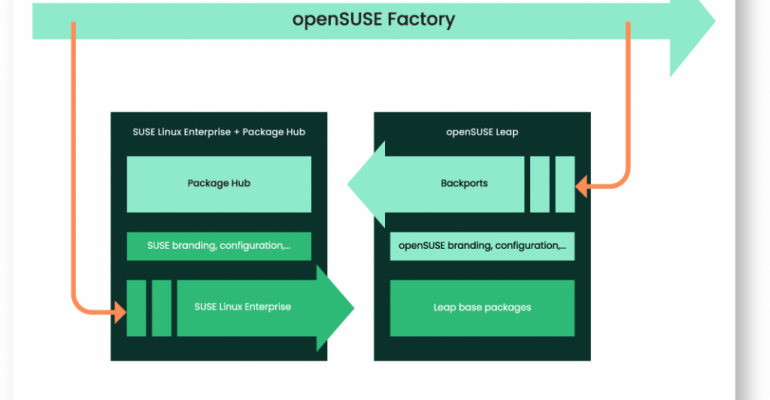 Is openSUSE Leap Ready to Be the New CentOS?

OpenSUSE Leap is set to become an identical twin to the commercial distribution SUSE Linux Enterprise in a way that CentOS never was to RHEL.

openSUSE Leap 15.3, the Linux distribution SUSE released in beta last week, represents a departure for the German software maker in that it's nearly identical to its commercial distribution, the one that makes it money. It's also a good candidate for replacing CentOS, the free Linux distribution that's been popular among enterprises which Red Hat, its developer, is now planning to stop supporting.

Leap will no longer be merely based on the source code of SUSE Linux Enterprise. It will share the exact same binaries. This means that with its next stable release, in June, there will essentially be no difference between the free-to-use community distribution and SLE, which requires registration and a paid support contract to use in production.

Leap was created in 2015 as a counterpart to openSUSE's flagship community distribution, Tumbleweed, which sits upstream and is used as a testing ground for SLE. While Tumbleweed is a rolling release and uses the latest, cutting-edge software releases, Leap sits downstream of SUSE Enterprise, with a traditional release schedule and a conservative approach to software that eschews the cutting edge over stability.

This is similar to Red Hat's traditional approach with CentOS and Fedora, where CentOS sits downstream of Red Hat Enterprise Linux as a freely available clone based on the same source code, while Fedora, until recently, sitting immediately upstream, tasked with being RHEL's testing ground.

But while Red Hat has decided to reposition downstream CentOS (renaming it CentOS Stream in the process) to sit upstream, between Fedora and RHEL, as the new testing platform, SUSE has decided to double down on its free downstream counterpart by making it something of an identical twin of its commercial distribution.

"This is super exciting for me, and I don't see anyone doing this," Gerald Pfeifer, SUSE's EMEA area CTO and board chair at openSUSE, told DCK. "It allows you as a user to use one or the other, and then move."

"If you build a container, you can essentially build a SUSE container and you can then run it as openSUSE, or you can run it as SUSE Linux Enterprise," he said. "If you have a pipeline -- an integration pipeline and testing pipeline -- you can run it as openSUSE, so your developers on their notebooks in their labs can use openSUSE and then when the time comes to deploy it, be it on premises, in the cloud, or at the edge, you can quickly transmute it.

Although a primary reason behind this move was to make it easier for DevOps teams to test software, configurations, and the like before putting them in production, there's no reason why organizations with enough in-house expertise to forego paid support couldn't use openSUSE Leap for production workloads in much the same way that some IT departments have been running CentOS in production instead of paying for RHEL.

Considering Leap as a CentOS Replacement

Carrying that a step further, organizations that are running CentOS 8 in their data centers and have been scrambling to find a replacement due to Red Hat's surprise announcement a couple of months back that the distro will reach end-of-life at the end of the year instead of 2029, might want to evaluate Leap alongside in-the-works RHEL clones, such as CloudLinux's AlmaLinux, which is currently available in beta, and Rocky Linux, which is scheduled to see its first release at the end of March, presumably also as a beta.

Pfeifer told us that scenario was not originally part of the plan, as the binary merge had been on SUSE's roadmap since April, long before Red Hat announced it was pulling the rug from underneath CentOS 8 and any future releases.

"[The binary merge] is not a response to anything anyone else has been doing, but obviously it's a great opportunity," he said. "I would invite people to actually have a look and see whether this is something that meets their use cases, that meets their needs, and then please be my guest and have a look."

He added that moving from Red Hat or any other Linux distribution to openSUSE Leap isn't difficult.

"With SUSE, you have YAST, which makes setup and managing a lot easier," he said. "When it comes to things like the kernel or the user interface, it's not the same, but in my experience it's not a huge transition to go from CentOS to openSUSE or SUSE Enterprise."

Although replacing RHEL-based CentOS with SUSE-based Leap might create some minor difficulties, security should be somewhat improved, because security patches for Leap are available approximately at the same time as they're pushed to SLE. With CentOS, which is developed within Red Hat, security patches are typically available 24 to 72 hours after they land in RHEL, and will probably take longer in AlmaLinux and Rocky Linux when they're ready for prime time.

"It's actually the SUSE security team that also looks after the patches for openSUSE, so we develop them and once once they are released, then they are released to both," Pfeifer said. "That's the beauty of sharing the binaries, because when the binaries are ready, we just can copy them over. There is no rebuilding that needs to happen on the openSUSE side."