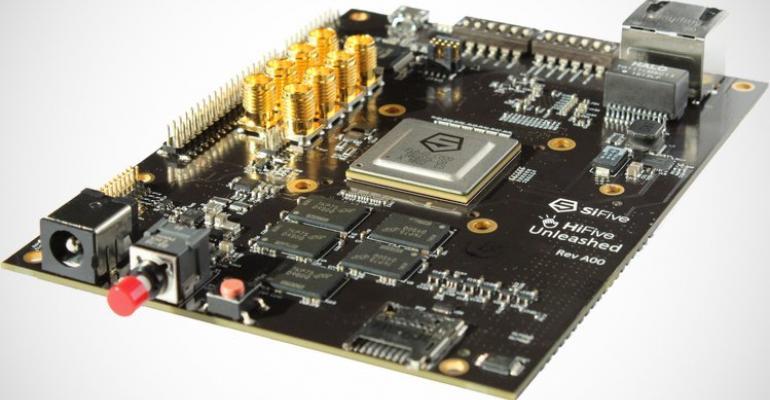 First fruits of the collaboration between the Linux Foundation and the open source project will be two "getting started" guides to be made available at next week's RISC-V Summit.

Usually when you think of the Linux Foundation you think open source software. After all, in addition to its namesake Linux, the foundation is the home to some of the most well-known software on the planet. Indeed, the cloud probably wouldn't exist as we know it without the help of the foundation, which hosts everything from Kubernetes (though it's Cloud Native Computing Foundation) to Cloud Foundry to containerd and more.

The Linux Foundation isn't stopping at software however. On Tuesday the foundation announced it has entered into "a joint collaboration agreement" with the RISC-V Foundation "to accelerate open source development and adoption of the RISC-V" instruction set architecture.

The RISC-V foundation is the home of the RISC-V project which maintains and develops the open source reduced instruction set CPU by the same name.

Although there obviously isn't any source code when it comes to hardware, open source hardware attempts to provide the same mindset to hardware development as open source software does to software development. This means that the plans for building RISC-V silicon chips are readily available, and after being built developers are free to market them or to include them in the design of devices they're bringing to market.

Device makers find the chips attractive because they allow them to affordably design, customize, and manufacture chips designed to match their needs instead of having to shoehorn one-size-fits-all products from Intel, AMD, or ARM chip makers. They also sip power, in many cases even when compared with ARM processors, making them idea for use in battery-powered devices or in edge data centers where power is an issue.

How affordable is it to bring a RISC-V chip to market? In April I talked to Naveed Sherwani, CEO of RISC-V-based SiFive, for our sister site, Data Center Knowledge. His company designs RISC-V template chips, and holds customers' hands has they go though the process of customizing them to suit their needs and then through the manufacturing process. He said that with RISC-V the cost of building a prototype is about 10 percent of what it would be using conventional methods.

"If the current system produces a prototype for $1 million, we are going to bring it down to $100,000," he said. "If it is $7.5 million, as in the case of certain technologies, we have already stated publicly that we want to bring it down to to $750,000. When you bring down the cost of the prototyping, it allows many more people to participate and try it out, and then get it to the customers and see if this product is going to be successful or not."

Interest in RISC-V can easily be seen by looking at the list of companies sponsoring the first ever RISC-V Summit which will be held next week in Santa Clara. Industry leaders spending money to support the event include the likes of Microsemi, Qualcomm, Rambus, and Western Digital. Western Digital, the top level "headline sponsor," earlier this year became an investor in SiFive and announced it's shifting its entire product line, currently about a billion chips a year, to RISC-V.

[The RISC-V Summit will feature four days of presentations on RISC-V ISA architecture, commercial and open-source implementations, software and silicon, vectors and security, applications and accelerators, simulation infrastructure and more. Get your ticket now.]

Although the Linux Foundation stops short of giving RISC-V official project status, it's offering the project many of the same benefits that are enjoyed by foundation projects such as CNCF. "In addition to neutral governance and best practices for open source development, the Linux Foundation will also provide an influx of resources for the RISC-V ecosystem, such as training programs, infrastructure tools, as well as community outreach, marketing and legal expertise," the foundation said in the announcement.

To get the ball rolling, the Linux Foundation and RISC-V communities have been collaborating on two "getting started" guides for running Linux and Zepher, a small open source real-time operating system designed for connected and resource constrained devices, on RISC-V-based platforms. The guides will be unveiled at the RISC-V Summit.

Disclosure: ITPro Today is part of KNect365, which has partnered with RISC-V on its event.