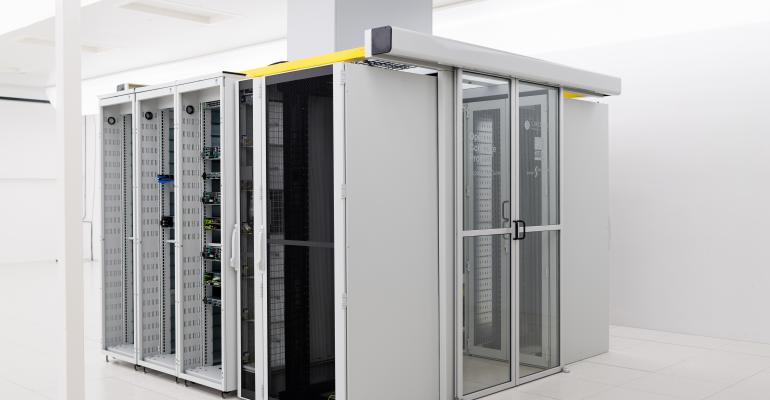 Open Compute Project
Inside the European OCP Experience Center in Amsterdam by Switch Datacenters, Rittal, and Circle B
Design>Open Source

Even when removing Facebook, Microsoft, and Rackspace from the equation, sales of OCP-certified hardware is expected to reach $10.7 billion by 2022.

Nearly three weeks before the Open Compute Project's annual lovefest opens its doors in San Jose, OCP has released a sneak peek at this year's report on the state of the ecosystem built around OCP-certified data center gear. The full report will be made available at the OCP Global Summit which will be held March 14 and 15, but the takeaway from the preliminary report is that the numbers continue to grow.

The Open Compute Project is to data center design what open source is to software. Facebook got the ball rolling in 2011 when it made public the designs for its energy efficient Prineville, Oregon data center, and enlisted the aid of Intel, Rackspace, Goldman Sachs and Sun Microsystems' co-founder Andy Bechtolsheim to launch the project, with a mission of designing and enabling the delivery of efficient server, storage, and data center hardware. Microsoft joined in 2014, contributing its server designs in the process, and these five companies and Bechtolsheim constitute the OCP board.

While it's pretty much a given that Facebook and Microsoft are probably the largest purchasers of OCP hardware, followed perhaps by Rackspace, until last year there weren't any hard numbers about who else is buying the gear. To find out, OCP hired the London-based market research firm IHS Markit, to study the market and come up with some figures.

The report on that first research, which focused on 2017 and excluded use by the five OCP board companies, opened a few eyes when it was released last March. The OCP hardware market exceeded the magical $1 billion mark, with sales of servers, networking switches, storage, peripherals, racks, power infrastructure, and other data center gear based on OCP designs generating just short of $1.2 billion in revenue for the year.

Granted, that was south of 1 percent of the total $127 billion data center hardware market in 2017, but by open source standards, a billion dollars is...well, a lot (just look at the brouhaha generated just seven years ago when Red Hat's revenues hit $1 billion for the first time).

For 2018 metrics, the folks at OCP again commissioned IHS Markit to have a look. Although drilling down into the details won't be possible until the full report is released at OCP's conference, according the just released sneak peek, the stats for OCP-certified equipment makers not only continue to rise, but are outperforming expectations. For 2018, non-board OCP revenues, which were expected to be about $1.84 billion, came in at $2.56 billion, representing a year-over-year growth of 120 percent.

"The market ecosystem for OCP-certified equipment continues to mature, with more diversity for increased choice and an expanded supply chain allowing more tier-two CSPs, telcos and enterprise consumers to participate," said Cliff Grossner, the executive director of research and analysis at IHS Markit's cloud and data center research practice, said in a statement. "A notable difference from last year’s study was the shift from direct factory purchasing to suppliers with local support, as additional market segments increased adoption."

The purchasing shift to local suppliers might be a key element of this year's growth. At last year's OCP Summmit, Grossner said that with many Asian suppliers having no local outlets, many risk averse smaller customers were unable to give OCP-certified products a trial run ahead of making large purchases. One of the authors of last year's study, Vladimir Galabov, also indicated that enterprise users were reluctant to get on the OCP bandwagon due to hardware flexibility problems, another issue that seemingly is being addressed.

"OCP equipment market drivers such as serviceability, disaggregation and the flexibility to add new features took on a greater importance this year, which typically happens when a market matures and more mainstream buyers deploy," Grossner said.

According to the survey, the government sector passed financial institutions to take the lead in spending in 2017, while automotive and manufacturing is expected to have the highest 5-year annual growth rate. Healthcare is in the early stages of OCP adoption, the report said.

Looking ahead, IHS predicts that OCP revenue share will climb to more than 5 percent by 2022, representing a $10.7 billion market with a compounded annual growth rate of 56 percent. Servers, storage, and networking are the fastest projected growth categories, with passive optical networks being a potential high-growth area. The Americas still dominate (due to hyperscalers, the financial sector, and now also telcos), although Asia Pacific is expected to pass Europe, Middle East, and Africa by 2020.

Last year IHS opined that telcos would drive the next wave of OCP adoption, and that appears to be going according to plan. The preliminary report notes that, "markets are just forming for disaggregated cell tower equipment, but telco spend is expected to surpass hyperscalers by 2021."

"We are pleased that the adoption momentum continues and accelerates, and we value the insight provided by the study regarding barriers, challenges and opportunities," stated Rocky Bullock, CEO for the Open Compute Project Foundation. "We are committed to continued improvement in the entire ecosystem to support the future growth.”