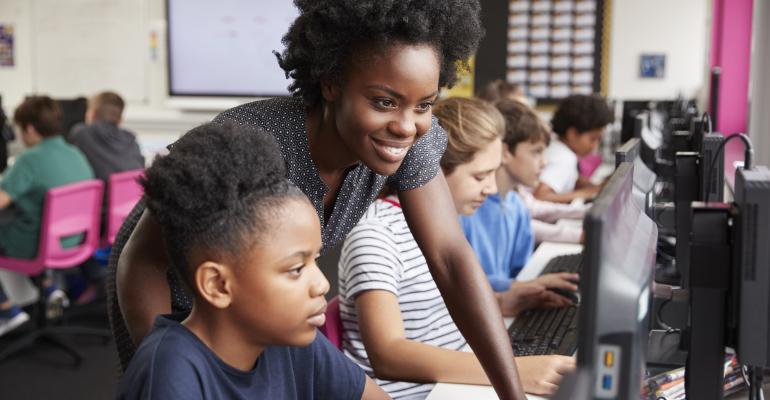 Girls Who Code Gets $25K Boost, Cloud Access from IBM

At the first All Things Open event since Red Hat became a wholly owned IBM subsidiary, the company debuted an Open Source Community Grant that mixes cash and access to the IBM cloud.

Just before the opening keynotes at this year's All Things Open conference, IBM announced that it has created the Open Source Community Grant, and that the first recipient is Girls Who Code, a national non-profit purposed with opening doors for girls to excel in STEM (science, technology, engineering, and math) fields. Half of the grant is comprised of $25,000 in cash, with another $25,000 granted as credits for use in IBM's cloud. The grant will be awarded quarterly.

It seemed fitting that the announcement opened the show at this year's ATO. The seven-year-old conference takes place in downtown Raleigh, N.C., just blocks away from Red Hat's headquarters, and typically the red fedora folks are front and center. But this is the first ATO since Red Hat became a wholly owned entity of IBM, and Big Blue has long been a major presence in Raleigh too.

The grant’s composition also reflects IBM’s increasing focus on its open-source and cloud offerings. In August, IBM debuted Cloud Paks, containerized software optimized to run on Red Hat's implementation of the open source container application platform OpenShift, and meant to help enterprises move to the cloud. A few weeks later in September, CEO Ginni Rometty clarified IBM’s strategy in the cloud, saying the company was betting on a hybrid cloud model that would let it partner with third-party clouds operated by Amazon and Microsoft while offering IBM services on corporate customers’ cloud-based servers.

Brad Topol, an open technology and developer advocate CTO for IBM's Kubernetes Technologies, told ITPro Today that the idea for the grant came from an open source developer working for IBM.

"At a meeting one day, he pointed out that there's all these great organizations that are focused on trying to help reduce the skills gap for women, minorities and underserved communities," Topol said. "A steering committee vetted the orgs. And, at that time, we turned around and anybody who was at IBM who had been contributing to open source got to vote."

According to IBM, since 1995, the percentage of women computer scientists has dropped from 37 percent to 24 percent, with numbers expected to continue declining unless interested parties make an active effort to reverse the trend. The company said that although girls' participation in computer technology always ebbs over time, the biggest decline is between the ages of 13-17.

Girls Who Code addresses the issue by way of after-school classes and summer courses designed to both advance IT knowledge and build confidence.

"This grant will help close the gender gap in tech and bring in new minds with new ideas," said Reshma Saujani, founder and CEO of Girls Who Code, in a prepared statement. "Gender equity is so important to our industry and it’s wonderful to work with IBM to achieve that."

Other finalists in the Open Source Community Grant competition were Outreachy, which sets up three-month paid internships on open source projects for people who ordinarily might not have those opportunities, including transgender women and men. Another finalist was the Python Software Foundation's PyLadies, an international mentorship group helping women become active in the Python open-source community through outreach and education.

While the initial IBM grant recipient was chosen by an in-house team of IBM open-source experts, in the future, the IBM Open Source Developer community can nominate deserving nonprofit organizations for the award. At present, no formal nomination system has been established, although ATO attendees were being encouraged to bring their suggestions to IBM's booth.