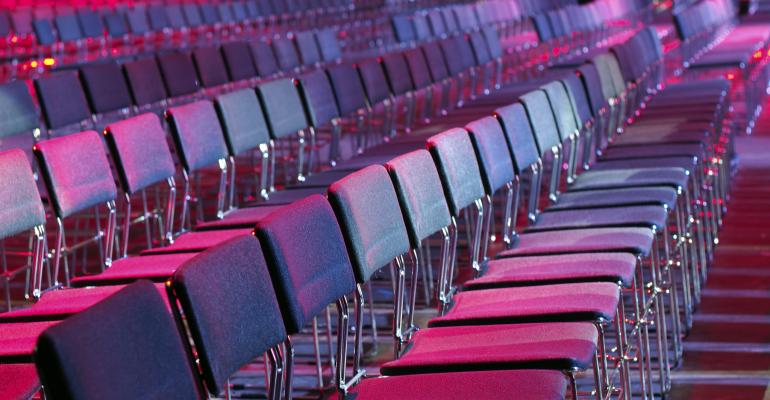 If you’re going to stare at a screen, you can binge-watch Netflix – or you could attend one of these online open source conferences, most of which are now free or at a significantly reduced price.

This hasn't been a particularly good time to be in the business of staging tech events. Between now and late summer, practically all scheduled in-person events worldwide have been cancelled – and it's possible that many of the ones that are still slated to open on schedule later in the year will also eventually close.

This is particularly troublesome for those who work on open source projects in which much of the development work is done remotely. For many open source developers, going to conferences is one of the only ways to get out in the world to meet other developers face-to-face, have a look at the work that other open source vendors are doing, and to keep up to date on the latest tech developments from industry experts.

Although open source developers are unlikely to fly to some cool and groovy city to spend a few days fellowshipping and learning from fellow geeks, they can still attend open source conferences from the comfort of their shelter-in-place abode, since many of the cancelled conferences are holding safe and sanitary online conferences. Even better news: Attending a conference in person can cost a king's ransom once attendees shell out  $1,000 or more for admission to a major event, plus airfare and hotel fees. In contrast, most of these virtual conferences are absolutely free. All anyone has to do is register.

Red Hat Summit ruled the roost as the largest and most impressive event on the spring conference calendar. The vendor is determined to remain number one as it shifts its activities online. The Red Hat folks seem bound and determined to make watching at home as close as possible to being at an actual event.

Monday, April 27th will be a pre-event day devoted to Red Hat's Kubernetes platform OpenShift, and the nuts and bolts conference will get started on Tuesday. The opening keynote is slated to stream live at 9 a.m. EDT, which, at 6 a.m. PDT, might be a little early for those on the West Coast. Not to worry – all sessions at the summit will be available for on demand viewing as soon as the session ends.

The subject of Tuesday's opening keynote will likely be some variation of "out with the old and in with the new." Although Red Hat isn't saying yet who will be speaking at each of the four "general sessions," both Jim Whitehurst, who just exited as the company's CEO to take the reins as president at IBM, and Paul Cormier, who has taken his place, are on the roster of keynote speakers. The other keynotes center around "demos," which means we'll get to see some of the new gee-whiz features in Red Hat products.

In an attempt to make the online conference experience as much like a "real" conference as possible, Red Hat's attempting to make room for the networking and socializing aspects of conferencing. Available 24/7 during both days of the event will be Open Neighborhood, an event space for sharing "feedback with our teams on the topics that matter to you and discuss technologies and products with our experts," as well as Q&A networking lounges "for questions, and for opportunities to network with peers and industry professionals." In addition, there will be "mindfulness shorts," which appears to be an attempt to recreate the showroom floor chair massage experience.

Open Source 101 had been scheduled to expand to two days and move from Columbia, South Carolina to Austin, Texas this year, but due to COVID-19, that expanded event has been pushed back to February 2021 and this year's event has been scaled back to a single day online event. The event primarily targets people and organizations who are just becoming acquainted with the open source ecosystem.

Unfortunately, this one's not free like several of the other online open source conferences on this list. Attendees will have to pay $19 to attend, which event organizers point out is less than a dollar per presentation.

VMware's vForum Online was born as an online conference several years back as a way to bring a scaled-down free version of the VMworld experience to those who'd rather forgo the hassle and expense of traveling. Although vForum and other VMware events aren't exclusively open source, VMware plays mainly in areas dominated by open source, making these conferences of interest to open source devs and vendors.

Although VMware hasn't gone to the extremes that Red Hat has with its Summit, VMware tries to make vForums as much like a real in-person conference as possible, even including a virtual exhibit hall where attendees can stop by virtual booths to engage in a conversation with the salespeople gathering leads.

This open source conference comes with a twist. Instead of being spread out over a two- or three-day period, this one is billing itself as "the first 24-hour around-the-world open source database conference." In other words, it's a marathon streaming live presentations for 24 hours straight, or from between 10 a.m. EDT on Tuesday May 19th until 10 a.m. EDT on Wednesday, May 20th.

Because Percona is an open source company that develops products for managing and scaling open source databases, the event's focus is narrow, even if the potential audience is broad. After all, there's hardly an application running in data centers that doesn't require at least one database connection.

Presentations will be led by folks from Percona, along with representatives for companies such as MariaDB, LinkedIn, Yandex, IBM, Shopify, and Alibaba. Well-known open source media maven Matt Asay will also be on hand, speaking for AWS. All of the individual open source databases will be covered (MySQL, MongoDB, PostgreSQL, etc.) along with security, containers, caching, and the like – all with a database bent.

This conference is focused on the SUSE Linux distribution primarily used on servers. This year's live and in-person SUSECON was originally scheduled to be held in March in Dublin but was overtaken by events and switched to a virtual format.

The folks at SUSE are taking a different approach than the other open source conferences on this list. For logistical reasons, instead of streaming the content live, the sessions will be recorded and offered on-demand, although SUSE hopes to be able to livestream the keynotes (but is hedging that bet by keeping prerecorded versions at the ready).

"This allows us to deliver a quality product and ensure connectivity for all, without the major hazards of livestreaming," Kent Wimmer, SUSE's director of strategic events said.

The presentations are pre-recorded but session speakers will be available for live chats, with availability times included with the presentation information on the conference's website. Wimmer said the speakers will mainly be available for these live chats on May 20-21 when the event launches, but they "will also schedule times later and in time zones more convenient to our global audience."

All keynotes and sessions will be available online through September 19.

"This also allows for a better attendee experience," Wimmer said. "Attendees can watch the recorded session while they are on with speakers, or can watch the content before, collect their thoughts, and then ask focused questions when they have had a chance to think things through."

The event will mark the first appearance at SUSECON by SUSE's new CEO, Melissa Di Donato, who took the company's reins last year.

This is a database-centered conference that's centered around PostgresSQL, an open source object-relational database that sees a lot of enterprise use. This will pretty much be a conference for nuts-and-bolts database users, but with a speaker roster drawn from the ranks of IT professionals, developers, and Postgres community leaders. This is a relatively small event for an important niche market.

Although the event does have a webpage for free registration, as well as a speakers list containing a dozen or so speakers, there is not yet a schedule of presentations posted.

The Linux Foundation's flagship conference, Open Source Summit, is moving online for 2020. Originally scheduled to be held in Austin starting on June 22, the event is arguably the premier event of the open source conference season.

According to the Linux Foundation, the online event will include 230 sessions with live speaker Q&A, one-on-one chat and group networking lounges, and an interactive showroom with "real-time conversations with sponsors, virtual demos and downloadable resources." There will also be some online games – as a way of giving attendees the chance to earn schwag.

A centerpiece of Open Source Summit is an annual onstage conversation between Linux founder and Git creator Linus Torvalds and Dirk Hohndel, vice president and chief open source officer at VMware, which remains on the schedule as an opening day keynote. The summit is also used by tech companies as a venue for making major product announcements, which most likely will remain the case despite the change of format.

Although the online event will not be free, the cost is only $50, a bargain compared to last year's in-person event in San Diego, which started at $800 for admission.

GUADEC stands for Gnome Users And Developers European Conference – although this year's conference was set to be held in Zacatecas, Mexico, before COVID-19 put a kibosh on in-person events. Gnome is a graphical user interface that includes a set of desktop applications that install as the default UI in many Linux distributions.

As the name implies, GUADEC is primarily meant for Gnome developers, many of whom have day jobs as developers for many of the top tech companies across the globe, making this is another niche conference that is nonetheless important to the open source community. This event should be of interest to anyone who's interested in Linux desktop development, especially if they regularly use Gnome or any Gnome-supported software.

GUADEC and Akademy are essentially targeting the same group of attendees – desktop developers. GUADEC is for Gnome developers, while Akademy focuses on the other major Linux desktop environment, KDE. The event should appeal not only to developers, but also to users of KDE-supported projects, which includes nearly 200 software applications from software development, audio production, and education.

Like vForum, VMware's VMworld isn't an open source conference per se, but a conference in which practically every technology covered is dominated by open source. The digital version will be replacing both VMworld US, formerly scheduled to be held in San Francisco in late summer, and VMworld Europe, formerly planned for Barcelona this fall.

There's not a lot of solid information about what the digital version of VMworld 2020 might look like. An FAQ on the VMworld website says the event will be held "during the week of September 28," and that they "are still working through many of the details." Organizers are continuing to take pitches for presentations through May 1, so we probably won't know more until sometime after that.

If you didn’t see your pet event here, it’s helpful to keep in mind: Most of the open source conferences scheduled for midsummer and later are officially planning on opening while keeping a wary eye on the COVID-19 situation. Many may eventually cancel their in-person conferences for safety reasons and offer an online event as a way to keep their target audience engaged. Just keep checking back – we will too.