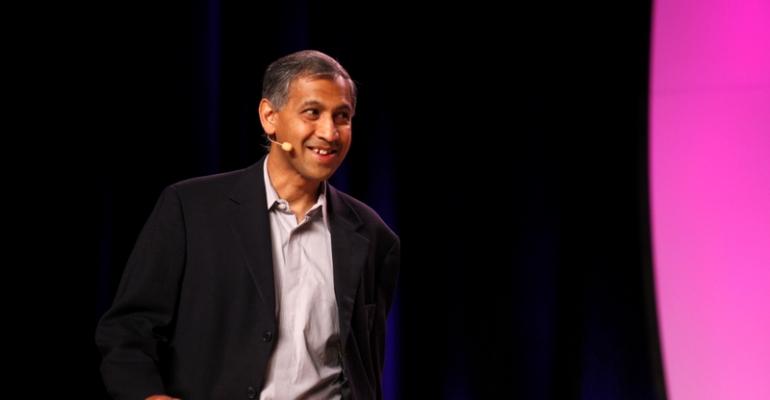 Interop
Rajiv Ramaswami, then executive VP and GM at Broadcom, speaking at Interop 2013. Ramaswami is now president and CEO of Nutanix.
Companies>Nutanix

The company faces a steep hill in proving its former COO actively harmed its business when negotiating with the competitor.

Unless VMware can prove that its former executive who recently became CEO of Nutanix disclosed trade secrets or actively competed against VMware while still employed there, it appears to have a weak case, a law expert specializing in such matters told DCK.

In December, VMware sued its former COO Rajiv Ramaswami, accusing him of breaching his contract and duties while he was being interviewed and recruited for the chief executive role at Nutanix, VMware’s close competitor.

In its lawsuit, filed on December 28, VMware accused Ramaswami of meeting with Nutanix executives and board members and brainstorming about Nutanix’s future business strategies for at least two months – while also participating in meetings to develop VMware’s product roadmap and go-to-market strategies.

Ramaswami, who was VMWare’s COO of products and cloud services, resigned from VMware on December 7 and became CEO of Nutanix on December 9.

The two Silicon Valley-based companies compete in the market for hyperconverged infrastructure software and software that allow businesses to manage their hybrid, multi-cloud environments.

In the lawsuit, filed in California Superior Court in Santa Clara County, VMware argues that Ramaswami should have alerted VMware of a conflict of interest so that it could take measures to protect itself. VMware is suing Ramaswami for breach of contract, duty of loyalty and fiduciary duty, and unfair competition. The company has requested compensation for damages.

Nutanix said the lawsuit was a misguided, unfounded attempt to hurt a competitor:

“Mr. Ramaswami and Nutanix have gone above and beyond to be proactive and cooperative with VMware throughout the transition. Nutanix and Mr. Ramaswami assured VMware that Mr. Ramaswami agreed with his obligation not to take or misuse confidential information, and VMware does not contend otherwise. However, VMware requested that Mr. Ramaswami agree to limit the ordinary performance of his job duties in a manner that would equate to an illegal non-compete covenant, and it requested that Nutanix agree not to hire candidates from VMware in a manner that Nutanix believes would be contrary to the federal antitrust laws.

It is disappointing to see VMware’s management sue him just because he chose to pursue an opportunity to become a public company CEO. We believe that VMware’s action is nothing more than an unfounded attempt to hurt a competitor and we intend to vigorously defend this matter in court.”

VMware said Ramaswami demonstrated poor judgment and had a “clear and extended period of conflict of interest.”

In the lawsuit, VMware said Ramaswami downloaded more than 2,200 files from his VMware computer – files that Ramaswami said were personal. But the fact that he downloaded the files about a month before he resigned from VMware shows proof that he was planning to leave the company, VMware claims in the lawsuit.

Ramaswami deprived VMware of the ability to protect itself “by concealing his Nutanix-related activities,” VMware said in its statement. “VMware is not a litigious company by nature. Indeed, the company tried to resolve this matter without litigation. But Mr. Ramaswami and Nutanix refused to engage with VMware in a satisfactory manner.”

Both companies declined to comment beyond the statements posted on their websites.

Orly Lobel, a law professor at the University of San Diego and an expert in intellectual property and employment and labor law, said there is no conflict of interest when an employee interviews and takes a job with a competitor.

California does not allow non-compete agreements, meaning employees are allowed to take a job with a competitor or start a competing company, she said. While employees have a duty of loyalty, they have the right to interview and negotiate for a new job – and they don’t have to tell their current employer about it.

Lobel has written several books, including Talent Wants to Be Free and You Don’t Own Me.

In their job interviews, employees are not allowed to share sensitive information, such as their current employer’s product plans, but they can “brainstorm” and show they are knowledgeable, are full of ideas, and have good experience, she explained.

“Under California law, [Ramaswami] is allowed to be in conversation to leave and join a competitor,” Lobel said. “He does not have a duty to tell them he’s interviewing because of the non-compete ban and because of the fact that duty of loyalty does not extend to thinking about leaving, or interviewing, or searching for an alternative job.”

In the lawsuit, VMware claims that Ramaswami has disclosed and will continue to disclose to Nutanix confidential or sensitive information about the industry that he learned while working at VMware – and that as a result, VMware has suffered harm and will continue to suffer irreparable injury.

However, VMware has to prove Ramaswami has shared its confidential or sensitive information with Nutanix or actively competed against VMware while he was still a VMware employee.

“It’s in the early stages of the litigation, so it’s too early to know if they have more to say about this,” Lobel said.

The upshot: if everything Ramaswami has done is on the up and up, he was well within his right to interview with Nutanix and take the job as CEO, she said.

Lawsuits Over Talent Poaching are Common

Lobel has seen this type of litigation in the past, where one company sues a rival for wooing away its employees. They often file these lawsuits not only to scare the competitor but to scare its employees from going to the competition, she said.

It’s unclear whether VMware has similar motivations, she said, but there have been situations where a larger, older company sues an up-and-coming competitor over employees.

“They don’t like that this competitor is going after their best employees, so they file the lawsuit not just because of this employee who left,” she said. “They are trying to scare the competition from going after more of their employees, but also scare their employees. They’re saying, ‘look, we don’t just lose people without a fight,’ and even if they lose [the lawsuit], no one wants to go through litigation because it’s costly for both sides.”