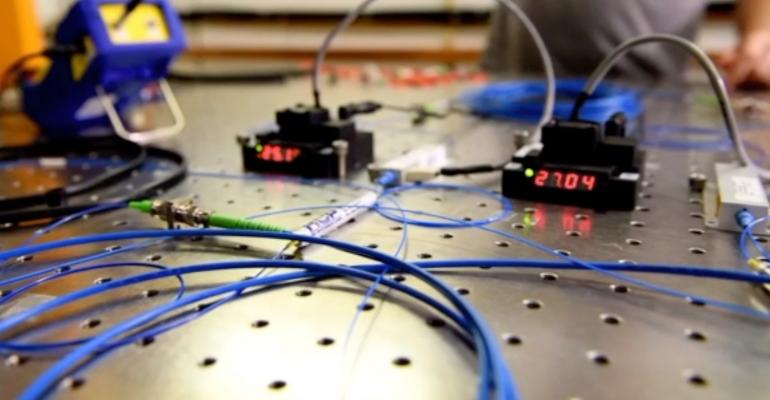 Quantum Teleportation Makes Progress, But Toward What?

What could scientists’ recent success in teleporting quantum states mean for data centers of the future?

In what they described as a key milestone on the way to redefining global communications, a group of researchers recently managed to teleport quantum states over 27 miles with more than 90 percent fidelity.

The team, consisting of scientists from Fermilab, AT&T, Caltech, Harvard University, NASA Jet Propulsion Laboratory, and University of Calgary, published results of the experiment in a paper in December.

The results have big implications for the future of data centers, for whom quantum teleportation could mean more secure communications, Panagiotis Spentzouris, senior scientist who heads the Quantum Science Program at Fermilab, told DCK.

Not the Kind of Teleportation You May Be Thinking Of

We're not talking about "Beam me up, Scotty." The experiment didn’t involve transmission of physical objects -- only of quantum states.

The system also can't be used for instantaneous communications, still limited by the speed of light.

In fact, it requires a second, traditional communication channel in order to work.

It starts with two entangled particles, two photons, for example. It's like having the only two copies of a book. Alice and Bob each get one copy. (They’re always named Alice and Bob in quantum physics.)

"If Bob opens the book without Alice telling him about the index, it will be garbled," said Spentzouris. "He needs this index to make sense of the information."

Since they're the only two people in the world with copies of the book, when Bob does read the information, he can be sure that nobody else has it.

But how does Alice send the table of contents to Bob? By any means she likes. Email. Fax. Carrier pigeon. The second communication channel here is bound by all the standard laws of physics.

Albert Einstein dismissed quantum entanglement as "spooky action at a distance." As it turns out, it works after all.

One high-value use of quantum teleportation is to distribute encryption keys. This is called quantum key distribution.

The technology demonstrated at Fermilab is only one of several ways to use quantum physics to communicate encryption keys, said Spentzouris. "The first protocol just uses quantum correlation."

But current quantum key distribution methods are limited by distance and require intermediary nodes to pass on the messages.

"Today, we are talking about 100 kilometers or so, which should soon be expanded with QKD satellites," said Bruno Huttner, co-chair of the Quantum-Safe Security working group at the Cloud Security Alliance and director of Quantum Strategic Initiatives at ID Quantique. a quantum key distribution company. "However, you still have to trust the satellite or any intermediary mode."

By using entangled states, the keys can be distributed globally without worrying about security at the nodes. “If the intermediate center is trying to get information on your keys, it will break the entanglement and be discovered," he said.

There are security benefits to the technology, said Amr Ahmed, managing director at Ernst & Young Consulting Services. It opens up a new world of secure data communications and "tremendous use cases."

"But we're three to five years away from seeing commercial use," he told DCK.

There are already quantum key distribution networks in place around the world that don't use the kind of quantum teleportation demonstrated at Fermilab.

Last month Chinese scientists announced the establishment of the world's largest QKD network is in China, spanning nearly 3,000 miles of fiber plus two satellite links. It's the only QKD network that uses satellites.

There are also smaller projects in the US and Europe, both commercial and governmental.

For example, UK-based KETS Quantum Security recently announced a quantum transmitter that weighs less than two pounds, with applications for drones and other aircraft and satellites.

According to research from Inside Quantum Technology, the quantum key distribution market was $85 million in 2019 and will grow to $850 million in 2025 and $4 billion in 2029.

But only a small portion will be conventional commercial applications, researchers said, estimating that data center QKD will be only $180 million by 2029 -- just 5 percent of the total market. Much of that will be related to business with governments or research institutions.

"I still haven't seen a clear-headed problem statement that a quantum internet is supposed to solve," said Steve Wilson, VP and principal analyst at Constellation Research. "The original applications for quantum weirdness – quantum key exchange which theoretically lets parties set up encryption key pairs confidentially– turns out to be easier said than done."

Plus, even if the key is transmitted securely, there are still plenty of opportunities for vulnerabilities in the rest of the system, he said. "Even a perfect quantum cryptography product still leaves the security system vulnerable to conventional cryptological attack, software bugs, social engineering, etcetera."

Quantum Cryptography Is a Hard Sell

Bethesda, Maryland-based Quantum Xchange launched the first commercial US quantum key distribution network in 2018, but enterprise adoption has been slow.

"We've moved away from QKD as our primary product," said April Burghardt, the company's VP of corporate communications.

A big obstacle for Quantum Xchange in his three years there was the lack of people on potential customers’ staff “with real quantum backgrounds,” Prisco told DCK. It was hard for companies to evaluate quantum technology and make decisions.

The kind of super-secure global communication network that would be made possible by quantum teleportation is even further away. "It could be 10, 20, 30 years from now that you could have a quantum internet," he said.

But quantum teleportation can do much more than the relatively prosaic distribution of encryption keys.

According to Bruno Huttner, co-chair of the Quantum-Safe Security working group at the Cloud Security Alliance and director of Quantum Strategic Initiatives at ID Quantique. a quantum key distribution company, quantum entanglement can have dramatic implications on computing.

"By using teleportation, you can somehow take a number of distant quantum computers and make them work together as one, potentially much more powerful, unit," he told DCK. "A kind of a global super quantum computer. Scary!"

This could be just the beginning of something huge, but no-one appears to know for sure.

"I think that we can safely assume that we have no idea today about the future applications of quantum teleportation and other quantum technologies," Huttner said.