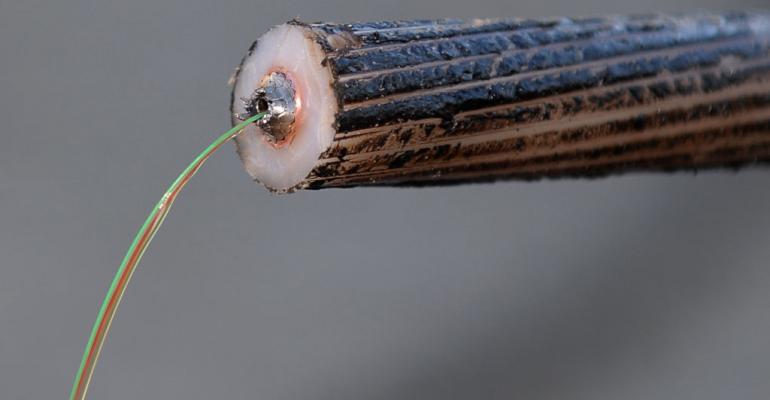 Amid a rush to build more and more submarine-cable capacity to connect the continents, NEC, one of the biggest suppliers of these systems, announced that it now has a working design for a cable with 20 fiber pairs – a record number of fiber strands that will result in cables that can transmit more data across the oceans than ever before.

Currently, Equiano and Dunant, the two cables Google is building between the US east coast and France and between Portugal and South Africa, respectively, use a design with the most fiber pairs to date. Dunant, according to Google, has 12 fiber pairs. Equiano’s design, the company said, uses the same technology (called space-division multiplexing) that allows for such a big number of strands.

Google co-developed the Dunant technology together with SubCom, but at the time the internet giant announced Dunant (last April), NEC said it already had the technology to go up to 16 fiber pairs, and Google said it was already looking into 24-pair cables.

The 12-pair Dunant design can push data at 250 terabits per second – that’s enough to push all content in the Library of Congress across the Atlantic three times in a single second, according to Wired.

The new 20-pair NEC design, which the Japanese electronics and IT giant announced this week, is a 25-percent improvement in fiber count from its previous record of 16. In the announcement, the company also said it would soon go to “24 fiber pairs and beyond.”

Companies like NEC, TE Subcom, and Alcatel-Lucent have been under pressure to increase capacity of submarine cables from internet and cloud giants like Google, Facebook, and Microsoft. Even though there is plenty of unutilized capacity on existing, older cables owned by telco consorita, the tech companies in recent years have been investing in their own intercontinental systems to shuttle data between their global data centers. They want control over their own network capacity as well as redundant routes to ensure network uptime and don't mind spending hundreds of millions of dollars to get those things.

Increasing the number of fiber pairs didn’t require any radical changes to NEC’s cable-system design, the company said. It took “only minor modifications to its proven repeater and cable designs. This was done by optimizing key repeater components.”

Pumps are key components within repeaters that sit along the length of a cable on the ocean floor to amplify signal in the cable, which loses power as it travels over long distances. Space in repeater shelters is limited, imposing a limit on the number of pumps that can be used and, as a result, limiting the amount of fiber pairs that can be packed within a single cable.