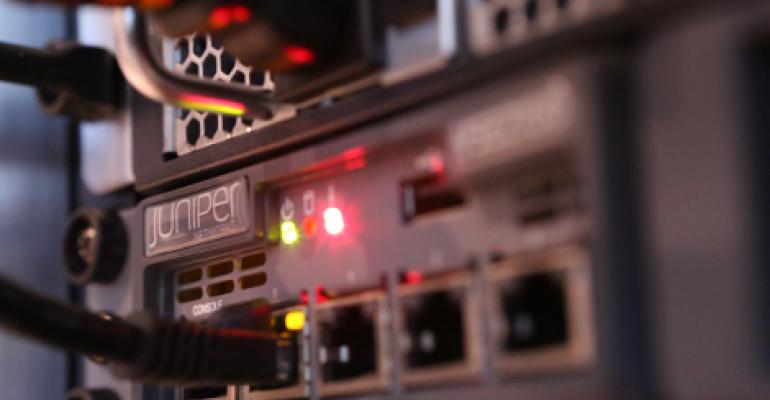 Juniper Networks Could Be Canary in Cloud Sales Coal Mine

A decline in data center hardware spending by major cloud providers could be more than a temporary blip for major networkers like Juniper Networks.

That’s the view of some analysts and company insiders, who suggest that years-long strategic plans by cloud providers have culminated in in-house production of networking tools they once purchased from the likes of Juniper, Cisco and other networkers.

Last week, Juniper Networks announced its third quarter revenue would be lower than anticipated, hampered by a slowdown in sales of equipment to cloud providers.

The story of Juniper Networks’ QFX switches offers a glimpse into potentially profound changes buffeting the relationships between IT hardware vendors and big cloud players who have become some of their most important customers.

“AWS is backing off on buying Juniper for their own reasons,” said one former employee with deep knowledge of the business relationship between Juniper and AWS. “They were buying a special build of the Juniper QFX switch to do an L3 IP Clos, which is their data center fabric architecture.”

The former employee – who now works at another channel vendor – spoke to MSPmentor on condition of anonymity because he wasn’t sanctioned to discuss the deal.

“Amazon now builds their own switch,” he explained. “They featured it in a keynote at (AWS re:Invent 2016) last November, which I attended.”

Juniper Networks did not immediately respond to an email seeking comment about the revenue shortfall and, in fairness, the company is constrained in what it could say publicly in such close proximity to its official Q3 earnings call on Sept. 24.

The Juniper Networks earnings warning came after two consecutive quarters during which the company’s revenue was buoyed substantially by strong cloud-related sales.

But even then, there were concerns about what might happen should some secular shift take hold in the sector.

Cloud is Juniper’s second largest business, and four of its 10 largest customers in Q2 were cloud providers, prompting the company to cite the concentration as a revenue risk.

In a recent report by ZDNet, Cowen & Co. analyst Paul Silverstein said that Amazon was Juniper’s biggest cloud customer and the likely culprit behind the cut in spending, given the size of the revenue miss.

That article also cited another analyst who argued that other Juniper cloud customers, including Google, Facebook and Apple, have spent big during the past 18 months building out their own networks in an effort to bypass Internet carriers.

"Our recent industry surveys reflect material slowdown (and potential digestion) of IP backbone build out with a couple of these cloud operators this quarter," William Blair analyst Dimitry Netis is quoted as saying.

In Amazon’s case, the cloud provider saw an opportunity to create its own switches that are better suited to its specific needs, according to the employee who worked on the QFX deal.

“So, two of them outperform the Juniper QFX but are cheaper because they use less connections. The connectors are expensive. The wavelengths are expensive.”

The new design has only the features that AWS requires.

“It has an ASIC (application-specific integrated circuit) that is built for Amazon,” the source said. “Extra features just cause problems and lead to delays in development and testing.”

If other major cloud providers do indeed follow suit, the implications could be substantial in the near term for major IT hardware vendors.

As Silverstein, the Cowen & Co. analyst is quoted as saying with respect to the Juniper Networks slowdown: “We suspect that the issue is not purely ‘transitory.’”