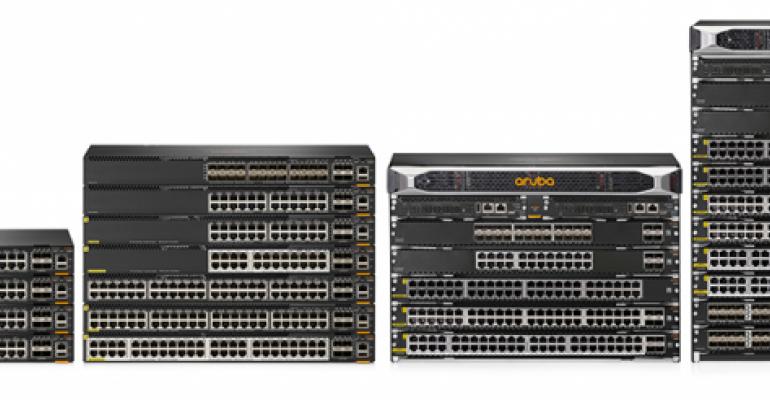 The HPE company announces new data center and campus switches and a single OS to manage it all.

Aruba filled out its switch portfolio on Tuesday, introducing a new line of switches designed for both data center and campus environments.

“We built AOS-CX flexible enough to address those different environments with a single architecture and single operating model with the goal of simplifying operations for IT,” Steve Brar, Aruba’s senior director of portfolio marketing, told Data Center Knowledge.

The CX 6400 Series switches are also well-suited for small to mid-size data centers, because they operate at wire speed and have data center features, such as VXLAN support, Brar said.

Analysts say Aruba’s move to provide end-to-end enterprise network products, from the data center to the edge, is important for competing with the likes of Cisco Systems, Arista Networks, and Juniper Networks.

Aruba got its start in wireless networking equipment and is currently the second-largest Wi-Fi vendor, behind Cisco, Bob Laliberte, senior analyst at Enterprise Strategy Group, told us. But in recent years, other networking players have been busy building out their network equipment portfolios, including adding Wi-Fi gear, and trying to encroach on Aruba’s turf.

It’s critical for Aruba to respond to all this encroachment by branching out into the data center and enterprise network switch markets, Laliberte said.

“Now that Aruba is delivering a complete solution, it gives them an even playing field to compete,” he told us. “You would expect them to focus on their strength in the wireless market and leverage their existing customers to drive adoption of their end-to-end solution.”

Aruba’s single network OS for data center and campus switches is compelling to potential customers, he added. The cloud-native AOS-CX OS allows the company to roll out bug fixes and new features much more quickly.

Other vendors, such as Arista, also provide a single network OS, he pointed out.

“As environments get more complex, having a consistent OS across the data center and campus drives up operational efficiency, improves productivity, and ultimately delivers a better experience,” Laliberte said.

Gearing Up for IoT

The new switches will help enterprises future-proof campus networks as they begin to deploy new Wi-Fi 6 access points and deploy more Internet of Things devices, such as smart lightning and card readers, Brar said. The CX 6300, for example, provides 10/25/50 gigabit uplinks to meet current and future bandwidth requirements. Its Power over Ethernet functionality can continually power IoT devices even as switches are rebooted, he said.

Also in November, the company plans to release a new version of its network management tool, with new automation features. Aruba NetEdit 2.0 with Network Analytics Engine (NAE) will provide a centralized view of the network, analyze network traffic, and provide actionable insights to help IT organizations troubleshoot, Brar said.

For example, through a single topology view of the network, the tool will report status of every network device by displaying traffic signal color codes: red, yellow, and green.

Network operators will be able configure the tool to automate some actions. For example, if the tool detects an IoT device compromised by a security vulnerability and is sending out malicious traffic, the NAE can automatically shut its port down and turn off the device.