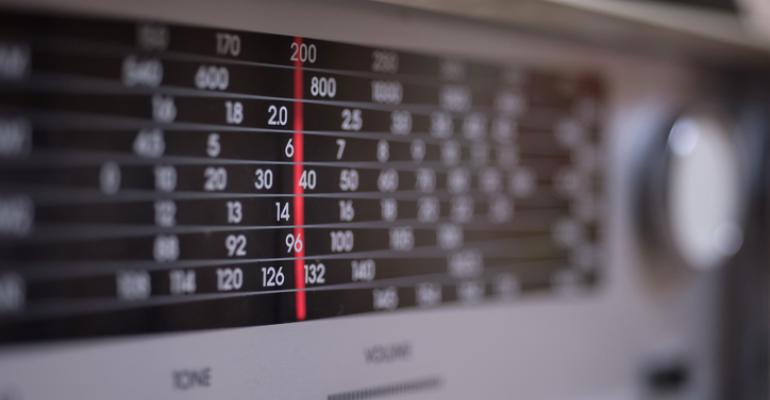 Brian Louis, Nick Baker and John McCormick (Bloomberg) -- The latest twist in the race to be fastest in high-frequency trading sits just down the road from the Promise Equestrian Center, a sprawling stable and horse-riding complex about 45 miles west of downtown Chicago. It uses a super-charged version of techniques dear to amateur radio operators worldwide.

On a 58-acre field that grew corn last year, two towers rising about 170 feet support a military-grade antenna shaped like a giant spider’s web. The array is pointed toward market centers in New York, London and Frankfurt. A third pole, topped with a single round microwave dish, is aimed at a data center 16 miles away that powers one of the world’s largest trading hubs: the futures exchanges run by CME Group Inc.

The secret project in Maple Park, Illinois, was discovered -- appropriately enough -- by a ham-radio enthusiast. It remains shrouded in mystery. Even county officials and neighbors are unclear about its purpose.

But public records point to a probable explanation: Traders appear to be testing the idea of using shortwave technology to convey data between the CME facility and key exchanges around the globe -- a few millionths of a second faster than rivals. That can be the difference between winning and losing in high-frequency markets, where the ferocious battle for being first continues to escalate.

The company behind this project is New Line Networks LLC, a joint venture of Chicago-based Jump Trading LLC and New York-based Virtu Financial Inc., according to Kane County records. They build sophisticated trading networks for some of the most important financial markets. Last year, Bloomberg revealed how their joint venture placed an antenna right across the street from the CME data center, probably shaving a microsecond or so off transmission speeds.

The backbone of the technology to gain an edge on rivals was first used in the 1800s when Thomas Edison was inventing the light bulb. Shortwave is well-known to fans of broadcasters such as Voice of America and BBC World Service. U.S. embassies and the military commonly used shortwave until the 1980s, when communications satellites started to replace it.

High-frequency radio waves send data at almost the speed of light. That performance is similar to microwave, the technology most commonly used today by traders. But shortwave has a big advantage: It can travel at that speed for very long distances.

With enough of a power boost, data could be sent from the facility to European market centers in a single burst, bouncing signals off a layer of the atmosphere called the ionosphere.

That conceivably would be a vast improvement from today’s fastest route, which beams data across microwave towers spread about as much as 50 miles apart that stretch from Illinois to New Jersey -- and then through an undersea cable.

It may be that New Line is just experimenting for now. Its licenses, granted in November 2016, bar the company from selling the communications services to others.

Shortwave signals can be finicky, dependent on weather and even sunspots. But the Kane County antenna, combined with as much as 20 kilowatts of power, is “as powerful as some foreign shortwave stations,” said Greg Beat, a former networking consultant and Chicago-area ham operator. It uses what’s known as software defined-radio, which offers redundancy if a channel drops out, he said.

“The reason for this level of transmission power is to have a consistent, reliable signal” under various atmospheric conditions, he added.

Its location outside Chicago is no accident. The CME keeps the computers that run its exchange in Aurora, Illinois, making it among the most important nodes in the global financial system. Rapidly sending data from there to other important market centers -- including New York, London, Frankfurt and Tokyo -- can help the speediest traders profit from price differences for related assets. Those money-making opportunities often last only tiny fractions of a second.

Credit for uncovering the Maple Park and two other similar sites -- one in a suburb called West Chicago, the other in northern Indiana -- goes to Bob Van Valzah, who used to work at Sun Trading LLC, which agreed to be sold earlier this year.

Van Valzah first stumbled upon the West Chicago site when he was out biking one day in March. He deviated from his usual path, ending up behind Aunt Millie’s Bakeries beside railroad tracks. He’s a radio enthusiast, so a tower erected there caught his eye. He noticed a microwave dish pointed at CME’s Aurora data center and four shortwave antennae pointed toward Europe.

“I recognized the antennas on that tower as being large enough that they could send a signal across an ocean and that they were clearly not cellular antennas,” he said.

This West Chicago site appears to be run by IMC BV, one of the biggest trading firms in the world. It has a microwave antenna on that tower, Federal Communications Commission records show. A company called Toggle Communications LLC has an experimental radio license for antennas on the tower. An executive with Toggle has the same name as an executive for IMC in the U.S.

Van Valzah later combed through FCC records where he discovered another site, in Wanatah, Indiana, and also the Maple Park tract. A company that shares a Chicago address with New Line bought the Maple Park land in September 2016 for $800,000, according to Kane County records.

Back at the horse stable, the folks are intrigued but puzzled by the neighboring antennas. Promise Equestrian’s Gary Kempiak said he was told a university was behind the installation. He’s seen a worker on the tower late at night and early in the morning wearing a reflective vest that “sticks out like a sore thumb.”

You see people there at “just the strangest hours,” he said.