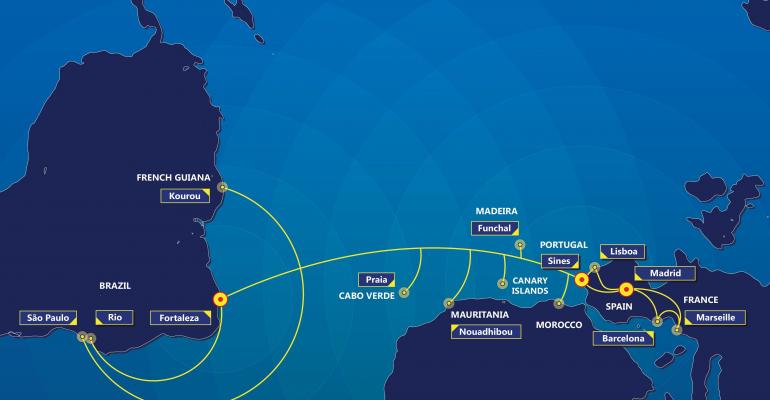 The project, part-funded by the European Commission, connects Brazil and Portugal – where it continues as a direct terrestrial link to Madrid, Spain.

The 5,700-mile route will enable Internet traffic to bypass North America, and its owners say it will deliver a 50 percent increase in network performance between data centers in Brazil, Portugal, and Spain.

"Offering one-hop connections between Latin America and Europe with a 60ms latency is a game changer from a transatlantic latency perspective,” said Diego Matas, chief operating officer at EllaLink.

EllaLink (previously EulaLink) was established in 2012 as a partnership between Spanish submarine cable operator IslaLink and Brazilian state-owned telecoms provider Telebras, with Alcatel Submarine Networks responsible for the infrastructure. By late 2019, Telebras had withdrawn from the project, citing a lack of resources.

EllaLink then found another financial backer, the Marguerite II equity fund, which covered most of the cost, estimated at around €150 million.

To complete the installation, EllaLink partnered with Equinix – one of the world’s largest data center operators that participates in more than 40 major submarine cable projects.

"More data is being produced and processed today than ever before—and almost every byte of data that moves over the internet touches a subsea cable,” said Jim Poole, vice president of Business Development at Equinix.

“As a result, organizations require access to high-capacity, low-latency networks capable of connecting them to data centers across oceans with the highest levels of reliability. This is where Equinix plays a critical role and offers a huge advantage to customers.”

Equinix is not the only data center specialist working on the project: in September, EllaLink partnered with infrastructure and connectivity provider BSO, which runs a network with more than 240 Points of Presence across 33 geographic markets. The company was tasked with developing opportunities in finance between Europe and Latin America in order to commercialize low latency services.

“Our work to connect those in emerging markets with other trading networks around the globe has garnered significant results for the regions, even at this early stage,” said Michael Ourabah, chief executive officer at BSO.

There are other, less obvious benefits to EllaLink, besides lower latency and higher bandwidth: the project took shape in 2014, soon after Edward Snowden revealed the extent of digital surveillance by the US National Security Agency (NSA).

At the time, the submarine cable project was seen as a means of escaping the watchful eye of the US and ensuring the neutrality of the Internet.

“We have to respect privacy, human rights and the sovereignty of nations. We don’t want businesses to be spied upon,” Dilma Rousseff, then president of Brazil, said when she announced the cable in 2014.