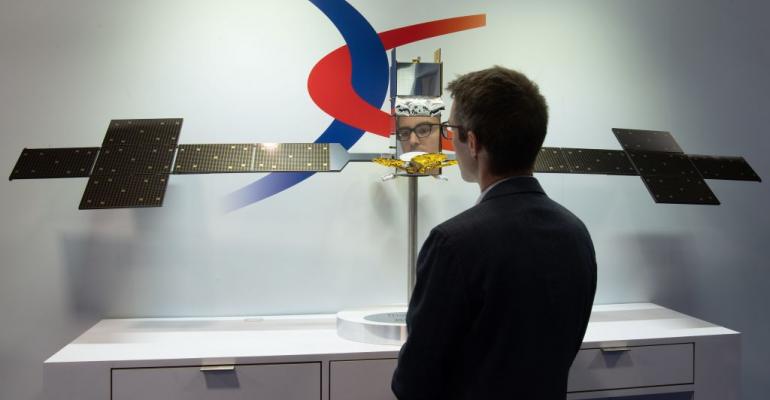 NICHOLAS KAMM/AFP/Getty Images
A visitor looks at a model of a ThalesAlenia SES-17 satellite at Satellite2019 in Washington, DC, in May 2019.
Companies>Microsoft

Satellite connectivity to Microsoft Azure could open up the amount of locations for deploying modular data centers, which are self-sufficient computing facilities packed inside shipping container-like enclosures that can be plopped anywhere a big cloud customer may need computing infrastructure.

That’s according to SES Networks, a partner with whom Azure recently conducted a “live demonstration” for such a setup. The partners connected a modular data center on the US west coast to one of the large Azure cloud data centers on the east coast. The container was connected to Azure via the cloud provider’s ExpressRoute service over fiber, with SES-enabled satellite connectivity acting as backup, according to an SES case study reviewed by DCK.

Microsoft on Tuesday announced an addition to its cloud services called Azure Modular Datacenters. Another satellite partner that's part of the launch is Elon Musk's SpaceX, whose Starlink low-orbit satellites will also connect to the modular computing facilities.

SES, which operates a network of satellites designed to provide content delivery services, has become “Microsoft’s MEO [Medium Earth Orbit] satellite partner for its new Azure Modular Data Centers, bringing high-intensity, secure cloud computing at the edge in challenging and remote environments, where there is unreliable or even no fiber at all,” SES CEO JP Hemingway wrote in a blog post slated for release Tuesday.

Related: Why AWS Is Getting into the Satellite Data Business

A Microsoft spokesperson did not respond to a request for more details.

Microsoft announced preview of Azure Orbital, its cloud services for satellite operators, about one month ago. The operators can schedule data transfers from their spacecraft to Azure ground stations to get their data onto the Azure network and process it using all the Azure cloud services.

AWS announced a similar service in 2018. While launching satellites into space has gotten cheaper and easier than ever, transferring data back to Earth has not. Ground stations are expensive to build and get access to.

If the cloud platforms solve the ground-station bottleneck, they will benefit from being the platforms for storing and processing satellite users’ data.

Modular data centers are used to quickly deploy computing capacity temporarily or deploy it in places where it’s difficult to build a traditional brick-and-mortar data center. They’re used this way for military applications in the field, for example, or by energy companies in remote energy-extraction locations. Some enterprises have deployed modular data centers simply for overspill compute capacity, as expansions of their main data centers.

Hyperscalers including Google and Microsoft have in the past used modular data centers as building blocks for their core cloud sites. But they have moved away from this approach, finding it unsuitable for their scaling needs.

While lowering a shipping container onto a concrete pad is easier than building a traditional data center, it still needs to be connected to power, water, and network. Having satellite connectivity in the mix addresses one of those requirements, theoretically expanding the amount of locations modular data centers can be deployed in.

In the aforementioned demonstration by SES and Azure, the modular data center acted as a ground station, featuring two 2.4m antennas. According to the case study, the demo showed that once the fiber connection was severed, SES’s O3b MEO satellite link continued moving traffic at “fiber-equivalent speeds,” with 700Mbps throughput “on the forward path, and 300Mbps on the return path – while maintaining fiber-like latency of less than 150ms.”

As part of the partnership, SES is planning to deploy its O3b gateways at Azure data centers, “ensuring one-hop connectivity from any remote site or edge compute node to Azure,” Hemingway wrote.