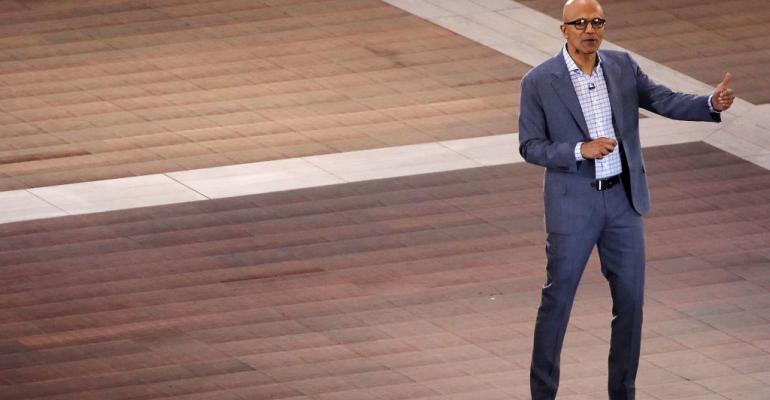 Microsoft posted another quarter of brisk revenue growth driven by cloud services • Booming demand means Microsoft has been able to carve out a solid business with its Azure cloud services, despite being second in the market behind Amazon • It dominates in the fast-growing market for cloud-based office software, and corporate upgrades to Windows are keeping sales growing even as PC sales remain flat

Chief Executive Officer Satya Nadella has been working to transform the company into a seller of services that let businesses store data and run applications from Microsoft’s data centers, instead of their own in-house machines. Amazon.com Inc. is the market leader, but booming demand means Microsoft has still been able to carve out a solid business with its Azure cloud services. Redmond, Washington-based Microsoft dominates in the fast-growing market for cloud-based office software, and corporate upgrades to Windows operating systems are keeping that product’s sales growing even as PC sales remain flat.

"What is there that’s not doing well at Microsoft?" said Mark Moerdler, an analyst at Sanford C. Bernstein & Co.

Profit in the fiscal first quarter rose to $8.82 billion, or $1.14 a share, topping the 96-cent average estimate of analysts polled by Bloomberg. Sales climbed 19 percent to $29.1 billion, Microsoft said Wednesday in a statement, higher than predictions for $27.9 billion.

Microsoft’s shares rose about 2.8 percent early Thursday. They had declined 5.4 percent to $102.32 in New York Wednesday amid a late-day market rout. The company’s stock has gained about 20 percent so far this year, but the shares have slipped in recent weeks in line with a broader equity market selloff.

Commercial cloud sales rose 47 percent to $8.5 billion in the quarter, while margins for that business widened by 4 percentage points to 62 percent, the company said in slides on its website. Microsoft has improved profitability in the division as it adds customers, letting it run services more efficiently and spread costs across more clients. With cloud demand rising, Microsoft has also said it will continue to invest in new products and data centers. As a result, capital expenditures will increase this fiscal year, but at a slower pace than last year, Chief Financial Officer Amy Hood said in an interview.

Microsoft is seeing more large and long-term cloud deals, and more deals that make use of so-called hybrid cloud, where some applications and data stay in a customer’s facilities and some move to Microsoft’s, Hood said. That boosts sales of Windows Server, SQL databases and Azure. Microsoft structures these contracts so customers of the traditional software also get the ability to move to the cloud.

"It’s really customer-friendly," Hood said. "They can move to Azure on their terms, their timing and at attractive pricing."

The company is also close to finalizing the acquisition of code-sharing website GitHub Inc. for $7.5 billion in stock, a deal aimed at accelerating moves into the cloud and artificial intelligence. Hood reiterated her previous forecast for that deal to add to profit in fiscal 2020.

Microsoft has been upgrading its cloud software, and has also revamped its sales force to do a better job getting customers to buy. In July 2017, Microsoft laid off thousands of sales workers and starting hiring for different kinds of roles, including some experts in particular industries and product needs. The changes have paid off, Piper Jaffray & Co. analyst Alex Zukin wrote in a recent note to clients.

"Customers even suggest that sales talent has been leveled up," he wrote, noting that the overhauled sales force is better at selling a group of products that work together, rather than individual programs. In the last few days of the quarter, Microsoft announced a deal with Volkswagen AG to underpin that company’s efforts in connected cars and cloud services.

The hope among Microsoft investors is that Azure keeps growing and drives sales in other parts of the business as well, as customers invest in new applications running in Microsoft’s cloud, Moerdler said. "I’m feeling more and more confident that they’ve got their act together," he said. "What they’ve accomplished in the past four to five years is much harder than what they have to accomplish in next five years."

Windows commercial product sales climbed 12 percent in the period, sending revenue in the More Personal Computing division up 15 percent to $10.7 billion. Though it’s staking its future on the cloud, Microsoft still sells billions of dollars of Windows software, particularly for corporate desktop computers. Global PC shipments were little changed in the three months ended in September, according to market research firm Gartner Inc. Though overall growth was minuscule, corporate demand was steady, and the market has shown "modest stability for two consecutive quarters," Gartner said earlier this month.

Sales in Microsoft’s Xbox and video-game business rose 44 percent. That unit has been expanding quickly for the past few quarters, fueled by what Microsoft executives like to call "third-party" software, mostly meaning players flocking to titles created by other game makers -- especially "Fortnite" -- but played on Xbox. Revenue from Microsoft’s Surface hardware gained 14 percent.

On a conference call, Microsoft executives said second-quarter sales for the cloud unit will be $9.15 billion to $9.35 billion, while revenue in the Productivity business, mostly Office software, will be as much as $10.2 billion. In the More Personal Computing unit -- including Windows and Xbox -- sales will be as much as $13.2 billion.

Commercial cloud margins will continue to widen, but at a slower rate than last year, Hood said on the call. Operating expenses will rise 8 percent, more than previously forecast, because Microsoft is taking into account the impact of the GitHub acquisition.

Daniel Ives, an analyst at Wedbush Securities, said the forecast looked strong. "Cloud numbers are defying gravity and it speaks to a bullish forecast" heading into the rest of the fiscal year, Ives said.