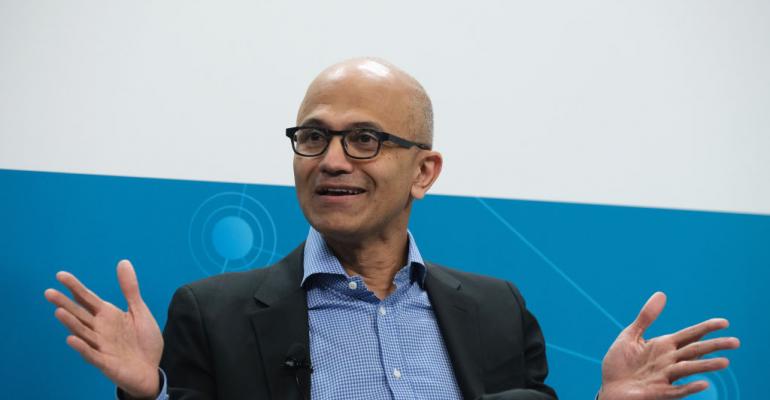 Since the pandemic started, business customers have accelerated a shift to Azure and Office 365.

Sales in the period that ended Sept. 30 rose to $37.2 billion, the software maker said Tuesday in a statement. That exceeded the $35.8 billion average estimate of analysts polled by Bloomberg, and marked Microsoft’s 13th straight quarter of double-digit revenue growth. Net income was $13.9 billion, or $1.82 a share. Analysts had predicted $1.54 a share.

Since the pandemic started, business customers have accelerated a shift to Microsoft’s Azure internet-based computing services and online subscriptions to Office software that comes with teleconferencing programs and work-from-home tools. That’s helped shore up growth at the company, which is No. 2 in cloud infrastructure behind Amazon Web Services, even as the global economy languishes.

Sales of video games have also risen with people looking for ways to pass the time while stuck at home. That’s made up for weaker one-time software purchases by smaller businesses and consumers.

“The pandemic and work-from-home has caused some information technology guys to move faster on building out a public-cloud strategy,” said Daniel Morgan, senior portfolio manager at Synovus Trust Co. “They have also made some big headway in market share from where they were in cloud just three years ago. Microsoft has done a good job in not letting AWS just blow them out of the water.”

Microsoft shares slipped about 1% in extended trading following the report, after rising 1.5% on Tuesday in New York. Though its first-quarter report was decisively upbeat, the Redmond, Washington-based company gave a second-quarter forecast for revenue in some divisions that fell short of the highest analysts’ projections.

On a conference call following the results, Microsoft said sales in the Intelligent Cloud unit, the group that includes Azure and server software, will be $13.55 billion to $13.8 billion, compared with the $13.9 billion average estimate. The company’s forecast for the More Personal Computing division was $13.2 billion to $13.6 billion, also below the $13.9 billion average prediction.

“We see this as prudent and conservative as Redmond continues to under-promise and over-deliver for the Street on this Covid backdrop,” said Dan Ives, an analyst at Wedbush Securities.

In the first quarter, Azure revenue rose 48%, compared with a 47% gain in the prior quarter. Analysts polled by Bloomberg on average projected sales of Azure cloud services to increase by 45%. Three years ago, Azure revenue had been almost doubling each quarter, and that growth rate has been closely watched among investors.

The software maker’s results may ease fears stoked by some early technology-industry earnings reports that indicated demand was crimped by the pandemic. Earlier this week, SAP AG, one of Europe’s largest tech companies, cut its revenue forecast for the full year and said it expects new Covid-19 lockdowns to curb sales through the first half of 2021. Last week, Intel Corp. reported a surprise drop in sales of chips for data centers, potentially signaling a drop-off in demand for expansion of the server farms that underpin cloud-computing services.

“What we’ve seen and continue to see are customers across industries really looking to push their digital transformation priorities forward, even in a time of constraint,” Hood said in an interview.

Next month, Microsoft will launch a new version of its Xbox video-game console -- right at a time of high unemployment, particularly among young people. The company is hoping to entice users by offering payment plans, a cheaper model that will go for $300, and programs that give buyers a new machine and a subscription with hundreds of games for a monthly fee. Hood forecast strong demand for the new console and said gaming hardware sales will rise 40% in the current period.

Commercial cloud sales in the first quarter rose 31% to $15.2 billion in the recent period, Microsoft said in slides posted on its website. Gross margins in that business widened by 5%, mostly because of an accounting change. Revenue from Xbox content and services soared 30%, and sales at the LinkedIn professional-networking service gained 16%.

The company’s Teams videoconferencing and chat software, which competes with Slack Technologies Inc., now has 115 million daily active users, up from 75 million in April.

While subscription revenue for offerings such as cloud services performed well, the company continues to see weakness in one-time purchases of corporate software as some customers try to pare costs.

In the personal-computer market, consumer demand remains strong from buyers looking for extra devices and larger screens to support remote work and school, Hood said. That helped boosted Surface device revenue 37% in the September quarter. Still, commercial sales were weaker, especially compared to the year-earlier quarter, when companies were upgrading ahead of the expiration of support for Windows 7.