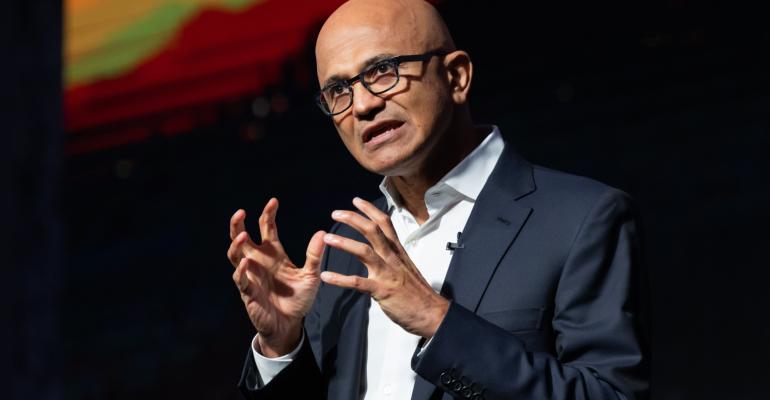 (Bloomberg) -- Microsoft Corp.’s Satya Nadella is weighing the company’s biggest-ever startup investment, seeking to give the software giant an advantage against Google in the race to weave advanced artificial intelligence tools into fields like search and apps.

The company is in discussions to invest as much as $10 billion in OpenAI, the creator of viral AI bot ChatGPT, according to people familiar with its plans. The proposal under consideration calls for Microsoft to inject the cash over several years, though final terms may change, the people said.

ChatGPT, which generates astonishingly human-like conversational text in response to prompts or queries, has lit up the internet since its introduction at the end of November, gathering its first million users in less than a week. Its ability to imitate the way real people talk and write has sparked concern about its potential to supplant professional writers and do students’ homework for them. The tool has also been called a potential threat to Google’s core search business.

Microsoft is already an OpenAI partner — it invested $1 billion in the startup in 2019. The Redmond, Washington-based company is currently using the developer’s language AI to add automation to its GitHub unit’s Copilot programming tool, and wants to add such technology to its Bing search engine, Office productivity applications, Teams chat program and security software. The software maker is putting OpenAI’s image-creation tool, DALL-E, another viral hit, into design software.

Now Chief Executive Officer Nadella is looking to step up that relationship as Google, which has long been essentially untouchable in search, suddenly appears vulnerable. The Alphabet Inc. unit’s prevailing model of keyword queries uses search engines to comb the web for specific terms, and then lets users make their own decisions as to what information is useful.

By contrast, ChatGPT responds to questions about topics such as political science and computer programming with detailed explanations, and its question-and-answer format means users can drill down until they fully understand. The bot is capable of responding to queries in a natural and humanlike manner, carrying on a conversation and answering follow-up questions, unlike the basic list of blue links that a Google search provides.

But ChatGPT has disadvantages compared with that old-school list of links. Unlike a search on Google or Microsoft’s own Bing, ChatGPT currently offers no context about where it sourced the information it used to build its answers, and OpenAI acknowledges that the tool’s responses can be incorrect and shouldn’t be relied on as accurate.

Plunking $10 billion into OpenAI would easily top any of Microsoft’s investments to date, according to data compiled by Bloomberg, including the $5 billion it spent to buy AT&T Inc. stock in 1999 in exchange for access to new cable networks, and the $1 billion stake it took in Comcast Corp. in 1997.

The dollar amount would also top all but three acquisitions Microsoft has made in recent years. Microsoft is seeking antitrust approval for a $69 billion purchase of video-game maker Activision Blizzard Inc., and in 2016 spent $26 billion to buy professional networking site LinkedIn. Last year, Microsoft completed its $20 billion purchase of Nuance Communications Inc., an AI company specializing in voice recognition and related software and services in the health-care field.

With more than $100 billion in cash and equivalents on its balance sheet, Microsoft could afford to buy OpenAI outright. The startup’s recent investment talks would put its value at $29 billion, the Wall Street Journal reported last week, but it’s not clear that OpenAI is considering a full sale.

And Microsoft’s investment in ChatGPT could come alongside venture capital firms including Thrive Capital and Founders Fund, which are in discussions to invest in a deal that would include the sale of at least $300 million of shares from existing shareholders, the Journal reported.

According to a report in Semafor, the deal Microsoft is discussing would give it a 75% stake of OpenAI’s profits until it makes back the money on its investment, after which it would assume a 49% stake in OpenAI. Semafor said it wasn’t known whether the deal has been finalized, but said documents sent to prospective investors in recent weeks outlining its terms indicated a targeted close by the end of 2022.

Microsoft itself has been working on artificial intelligence projects for decades and has made significant progress in areas such as speech and image recognition. The company last week released an AI model that can simulate a user’s voice based on brief audio samples. But OpenAI’s massive models for generating language and images have set the agenda in the AI field in recent years.

Increasing its stake will give Microsoft a front-row seat in developing OpenAI’s technology on Azure, Microsoft’s cloud infrastructure, one of its fastest-growing businesses and a company priority. It could also keep OpenAI’s products from going to rivals including Amazon Web Services and Google.

Adding ChatGPT to Microsoft’s Bing search engine, which has only a fraction of the global search-engine market, and a new deal with OpenAI could help Microsoft chip away at Google’s iron grip on the market by offering more advanced search capabilities. The Information has reported that Microsoft has also talked about incorporating the technology into its Outlook email and Word document-processing platforms.

While much of the hype around OpenAI’s ChatGPT has centered around the potential demise of human writers and the risk of students using it to cheat in school, the company’s tools are aimed at businesses, where it could help automate coding, writing and image creation.

“A potential $10 billion investment by Microsoft in OpenAI could enhance its main product lines like Office, Bing, LinkedIn and GitHub,” said Bloomberg Intelligence analyst Anurag Rana. “Embedding increased AI capabilities is already underway in most of these product categories, but the success of OpenAI’s ChatGPT product could improve productivity; for example, as recommending the best sales lead to a LinkedIn user or enhancing Bing’s search capabilities.”

Microsoft has already said it’s adding Dall-E to its design applications and offers it to select Azure OpenAI cloud customers. Mattel Inc., for example, is now using Dall-E through Azure cloud to generate images of toy cars the company might want to design.

GitHub, the programming-code repository owned by Microsoft, also has been using OpenAI’s language AI to aid software developers with a program called GitHub Copilot. As they type, Copilot suggests snippets of code that could come next in the program, like an autocomplete bot trained to speak in the Python or JavaScript. It’s particularly useful for the programming equivalent of manual labor — filling in chunks of code that are necessary, but not particularly complicated or creative.

Microsoft executives have said the company has plans to develop the Copilot technology for use in similar programs for other job categories, like office work, video-game design, architecture and computer security.