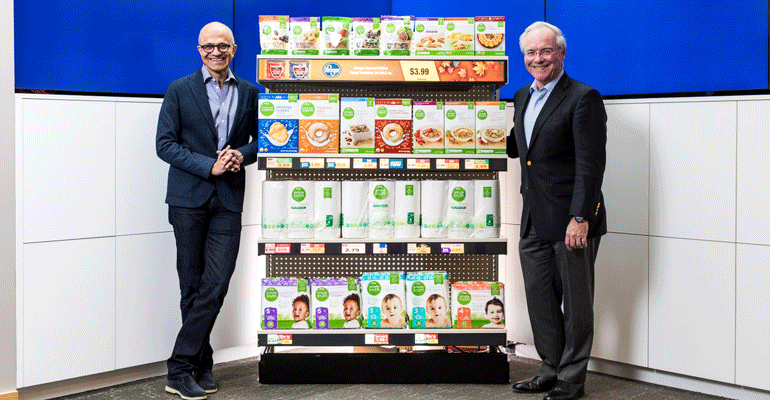 The valuation move across $1 trillion nosed the software maker ahead of Apple as the world’s most valuable company.

The company’s shares rose as much as 5.1 percent Thursday morning in New York, briefly pushing its valuation across $1 trillion before pulling back slightly. The move nosed the software maker ahead of Apple Inc. as the world’s most valuable company. The two tech giants, along with Amazon.com Inc., are all within striking distance of the symbolic $1 trillion mark as their stocks have rallied this year.

Revenue rose 14 percent from a year earlier to $30.6 billion in the quarter ended March 31, the Redmond, Washington-based company said Wednesday in a statement. Analysts on average projected $29.9 billion. Net income was $8.8 billion, or $1.14 a share, compared with an average analyst estimate of $1 a share, according to data compiled by Bloomberg.

Azure cloud-services revenue rose 73 percent, slower than the 76 percent Microsoft posted in the fiscal second quarter. Some investors have been concerned that while Azure is still growing rapidly, those increases have slowed from the past when doubling was a regular occurrence. Sales of Office cloud software to business customers rose 30 percent.

“The Azure growth blew away Street expectations,” said Dan Ives, an analyst at Wedbush Securities. “This was an A+ quarter across the board for Redmond.”

Commercial cloud revenue, a measure of sales from Azure, internet-based versions of Office software and some smaller products, rose 41 percent in the period from a year earlier to $9.6 billion. Profit margins for the business widened to 63 percent.

“The strength of our commercial clouds continued to boost’’ the company overall, Microsoft Chief Financial Officer Amy Hood said in an interview. “We saw demand for Azure across all of our geographic regions and among companies of all sizes,’’ including BMW AG and Renault-Nissan, she said.

Worldwide public-cloud services sales are expected to grow 17.5 percent this year to $214.3 billion, according to Gartner Inc. Software and cloud company stocks recovered in the first four months of 2019, with Facebook Inc., Apple, Alphabet Inc. and Amazon all up this year, after a roller coaster end to 2018 that saw shares drop amid concerns spending might be declining.

While the PC market declined in the first quarter, corporate machines were a “bright spot,” Gartner said. That helps Microsoft, which generally sells business customers a pricier version of Windows and has many of its corporate clients on a regular license for updates.

Microsoft said revenue for the Surface line of devices rose 21 percent from a year earlier to $1.3 billion.

Sales of Intelligent Cloud products, comprised of Azure and server software, will be $10.9 billion to $11.1 billion in the current quarter, Hood said on a conference call. The division’s revenue rose 22 percent to $9.65 billion in the fiscal third quarter, above the $9.3 billion average estimate of seven analysts polled by Bloomberg.

Microsoft sees its productivity and business processes unit, mostly Office software, reaching revenue of $10.6 billion to $10.8 billion in the fiscal fourth quarter, Hood said. The division’s sales rose 14 percent from a year earlier to $10.2 billion in the period ended March 31. That compared with an analyst average estimate of $10 billion.

More Personal Computing unit sales, including Windows and Xbox products, will grow to $10.8 billion to $11.1 billion in the current quarter, Hood said. The unit rose 8 percent to $10.7 billion in the fiscal third quarter. Analysts projected $10.5 billion on average.

Hood said Microsoft expects to spend $10.7 billion to $10.8 billion on operating expenses in the current period, and it will increase capital expenditures to continue expanding its cloud presence.