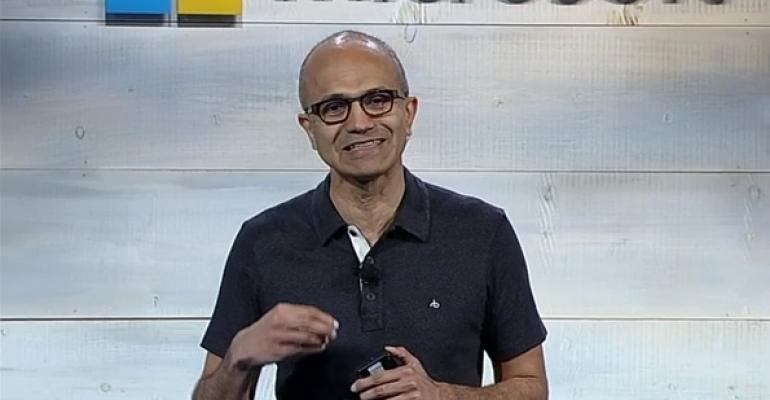 Microsoft Is Aiming to Leave Desktop Computing Behind Eventually

Microsoft's annual Ignite event has become the company's most visible method for broadcasting where it sees the computing industry going. This year, Microsoft's advanced a new narrative: The age of desktop computing and tidy application suites is over.

ORLANDO, Fla. -- Microsoft's annual Ignite event has become the company's most visible method for broadcasting where it sees the computing industry going -- or where it plans to guide it. Look at the clear messaging of 2015's "mobile first, cloud first computing" or the last two years' "digital transformation." This year, Microsoft's advanced a new narrative: The age of desktop computing and tidy application suites is over.

Let's look at how it built this story.

First: Satya Nadella's keynote kicked off with him talking about ubiquitous computing

The Microsoft CEO opened his keynote on Monday, Sept. 24, by saying, "Every place, whether it be the home or work, the stadium or a hospital, has got computing. Computing is not just about the computing industry, it's about the entire world."

By breaking computing out of the desktop and the office, and reframing it as a collection of devices that can collect and act on data to improve the world around us, Nadella is effectively saying that the mobile-first, cloud-first world is here and it's habituated us to the idea that computing is all around. It's now a question of expecting more from all these ambient devices and the apps that run on them.

Second: Microsoft's emphasizing the need to break down "silos" and approach computing from a data-first perspective

If the Open Data Initiative wasn't clear enough, Microsoft is moving toward two ideas that free data for use and re-use: the Microsoft Search function aggregates results across all sorts of apps and contextualizes them using AI, keeping the user in one app but able to access and work from the information in others. And second, the rise of AI to call out insights and add suggestions to data, in products ranging from Microsoft 365 to the Dynamics 365 suite of AI-enhanced programs, indicates that the emphasis here in on the data -- collecting, analyzing and extrapolating insights from it.

Third: Microsoft's broken tasks out of individual apps to focus on seamless workflow

One of the more compelling things about Microsoft Search is how it allows users to run application-dependent tasks from the search box. For example, if you're in Word, typing "Acc" in the search box brings up "Accept revision" or "Accessibility checker" as options. This streamlines task flow. And it subverts the current model of working within an app -- memorizing menu positions for different tasks or memorizing macros -- to emphasize working on a task rather than making mastery of the app a task unto itself.

But that's only part of Microsoft's overall effort. It's beefing up Teams so people can do … well, pretty much anything related to communicating and sharing, from moving files to editing together. There's no switching apps -- there's thinking of tasks.

According to the company, an estimated 2.6 billion workers -- 80 percent of the global workforce -- work jobs that aren't desk-bound, computer-based occupations. Microsoft's dubbed these the frontline workers and it is aiming at becoming the ubiquitous computing provisioner for them.

Now Microsoft's not abandoning desktop computing or OEM business any time soon -- its More Personal Computing division, which encompasses both the Windows business and hardware -- is still the leading money-maker of the company's three divisions. In Q4, that division made $10.8 billion, thanks to strong Surface 2 sales and strong commercial products and cloud services revenue.

But the overall history of that division is one of stagnation -- it's been hovering a little over or under the $10 billion mark for a few years while the other two divisions, Intelligent Cloud and Productivity and Business Processes, have logged impressive and consistent growth.

Microsoft is making money off the present -- but it's betting on making more money on the future of computing.