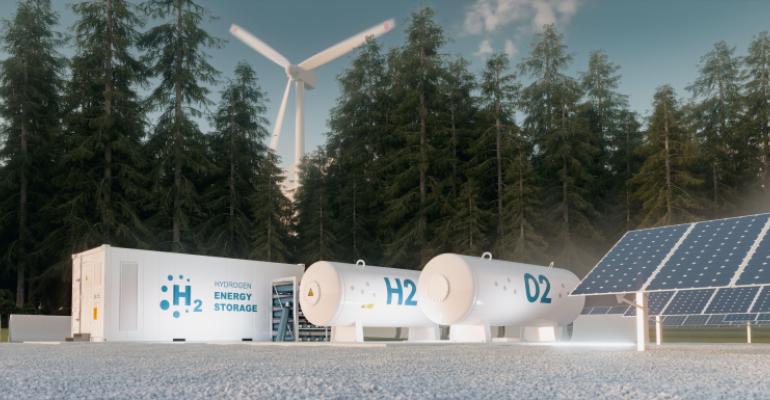 Microsoft is leading the way in leveraging hydrogen for backup power, with Amazon, IBM, and Facebook backing hydrogen.

Microsoft recently announced a successful test of a hydrogen fuel cell system that would provide backup power for its data centers. The three-megawatt system is envisioned to replace the hyperscaler’s current diesel-powered backup generators.

Microsoft and its hyperscale counterparts see the energy landscape ahead and its grim in terms of the growth in current demands on the existing power grid. More communities are protesting the placement of data centers in their areas despite the boost to economies data centers provide to said communities. To spur growth, hyperscalers actively seek out alternative energy sources, and hydrogen emerges as a viable player alongside nuclear-powered data centers.

“Three megawatts is super interesting because that’s the size of the diesel generators that we use right now,” said Microsoft’s chief environmental officer Lucas Joppa in the announcement.

This accomplishment is a step toward the right direction in Microsoft’s goal of becoming carbon negative by 2030. Part of achieving that goal entails eliminating its reliance on diesel fuel, which is mainly used to power the backup generators for its Azure data centers and accounts for less than one percent of the company’s overall emissions.

“What we just witnessed was, for the data center industry, a moon landing moment. We have a generator that produces no emissions. It’s mind-blowing,” said Microsoft’s director of data center research Sean James in the announcement.

Microsoft has been exploring the use of hydrogen power cells since 2018, when it partnered with researchers at the National Renewable Energy Laboratory to power a rack of computers with a hydrogen fuel cell. Two years later, the hyperscaler collaborated with Power Innovations, a provider of power management solutions, to build and test a 250-kilowatt hydrogen fuel cell system that would power a row — or 10 racks — of data center servers. The test was successful, with the system powering the servers for 48 consecutive hours.

Microsoft plans to install the hydrogen fuel cell system at a research data center, where its engineers will learn how to work with and deploy the new technology, including developing hydrogen safety protocols, the company said, though a date has yet to be set for deployment at a live data center.

Hyperscalers Back Up Hydrogen

Other hyperscalers are embarking on initiatives to support the use of hydrogen as a fuel source. For instance, Amazon plans to start using green hydrogen for its building and transportation operations in 2025, while IBM has partnered with two other companies to “develop an integrated, digitally enabled solution for facility owners to build green hydrogen assets more efficiently and at scale.” Facebook, on the other hand, has placed its efforts on research, creating a data set to help speed up the process of finding new, low-cost catalysts for the chemical reactions used to produce green hydrogen fuel.

“Hyperscalers are early adopters [of hydrogen] because of their immense energy demands and the need to meet corporate carbon emission reduction goals over the next two decades,” said Don Ayers, vice president of technology at Capstone Green Energy. “They are effectively serving as pilot sites to work out integration challenges and optimize control strategies using different generating technologies.”

Meanwhile, other data center operators are following the lead of hyperscalers. Equinix is collaborating with the National University of Singapore’s Centre for Energy Research and Technology to “explore technologies that enable the use of hydrogen as a green fuel source for mission-critical data center infrastructure.” In the Netherlands, NorthC installed a 500-kilowatt hydrogen power cell to fuel its Groningen data center’s emergency generator.

Hydrogen is considered an ideal green energy choice for backup power. “As the data center industry continues making strides in their carbon-free transition, much of the talk has focused on shifting backup energy sources to ‘cleaner’ ones, eliminating even potential emissions for the infrequent — yet conceivable — future outage,” said Melissa Reali-Elliott, digital marketing and content manager, data centers, at Kohler Power. “While data centers are fully committed to achieving more sustainable operations, they also require the predictable, reliable, and consistent power for their operations that backup systems offer. And so our industry will need to strike a balance, seeking reliability while minimizing environmental impact.”

Beyond backup power, hydrogen has the potential to fuel the data center of the future. “Green hydrogen produced from renewable energy and blue hydrogen produced from natural gas with carbon capture are clean alternatives to diesel,” said Suresh Pichai, director at Equinix. He adds that hydrogen fuel cells “are good candidates for standby power, as they are capable of the quick start-and-stop needs of standby applications.”

Ayers notes other benefits of hydrogen for data centers. “Local hydrogen generation on-site can improve reliability and resilience of a data center’s power supply, eliminating the need to transport fuel during times of extended backup generation,” he said. “When integrated with a microgrid, hydrogen can also help a data center manage its energy costs. Microgrid technology with hydrogen inputs also allows for combined cooling, heat, and power systems, which provide critical cooling capabilities for the servers.”

Yet hydrogen has its downsides. “Hydrogen is not widely available or in use today because it is difficult to compress, transport, and store,” said Ayers.

The high cost of hydrogen is another negative, but Pichai expects it to come down once capacity increases. “Cost is a deterrent for using hydrogen for prime — or continuous — power, but acceptable for standby power where the grid is fairly reliable.”

Hydrogen is also more difficult to source than diesel. “In an extended grid outage, sourcing green hydrogen will be much harder than getting a truck with diesel to deliver. As it scales, this may change, but with supply chain issues, potentially unreliable deliveries leave too much uncertainty,” Reali-Elliott said.

But with hyperscalers spearheading the shift toward hydrogen-powered data centers, the future looks bright for a sustainable data center industry. “Hyperscalers are leading the adoption of hydrogen fuel cell investment, and they are leading the charge that others can learn from,” said Reali-Elliott. “However, the widespread deployment of fuel cell technology is likely to be at least 10 years away.”

A boost in production and a more reliable supply of green hydrogen is needed, as well as the necessary infrastructure for adoption to rise. “Growing interest in hydrogen as a fuel — and as a source of backup power more specifically — will benefit all data center users in time as hydrogen production costs decrease and technologies advance,” said Ayers.

Reali-Elliott echoes this optimism. “Fuel cell technology will be a major presence in the sustainability mix moving forward, especially as we see more availability on the market,” she said. “There is more to come for our industry in the way of alternate fuels, hydrogen fuel cells, operational improvements, and a mix of the like when designing a backup system. Each sustainability improvement that gets our industry a step closer to our net-zero goals is a win.”