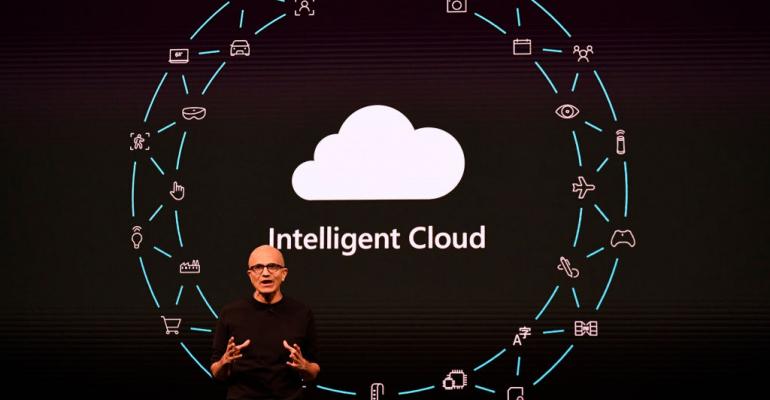 Microsoft is preparing for launch not just one edge computing service but three, one each for industrial connectivity on a 5G private network, standing up a mini Azure region closer to your customers, and offering cloud services that run inside a carrier network.

Connectivity and the amount of compute available differ from service to service, but for developers who will place workloads on them, the company is promising the same experience as in every other flavor of Azure – although for a limited set of Azure services. That promise of consistency applies across Azure public cloud, Azure Stack Hub (the on-prem version), Azure Stack Edge, or the Azure Arc control plane for Kubernetes clusters in non-Azure clouds. What you run where is a deployment decision, not one dictated by the development or operational model.

Azure Edge Zones, which Microsoft started previewing at the end of March, are meant to bring that consistency to applications that need to run at the edge for extremely low latency. The three new services, called Edge Zones, Private Edge Zones, and Edge Zones With Carrier, cover multiple “edge” types and use cases: more localized regions than the core public cloud with latency of ExpressRoute, Azure with 5G through a carrier, and Azure in private industrial or retail deployments with 5G connectivity.

“These are typically cages in exchange points,” Yousef Khalidi, corporate VP for Azure Networking, told DCK. “They are the same locations where we typically have ExpressRoute, where we have Azure Front Door [for web traffic routing optimization], where we have our CDN services, where we have our routers. They have the right security and compliance regime to enable you to host compute.”

Azure Edge Zones with carrier puts that same Azure hardware into a carrier-owned data center. In both cases it’s the same hardware used in standard Azure cloud availability regions. “We actually use the same supply chain, the same mechanism we have to send the hardware to the right location and make sure it is secure…, and that’s how we’ll scale the locations,” Khalidi explained. 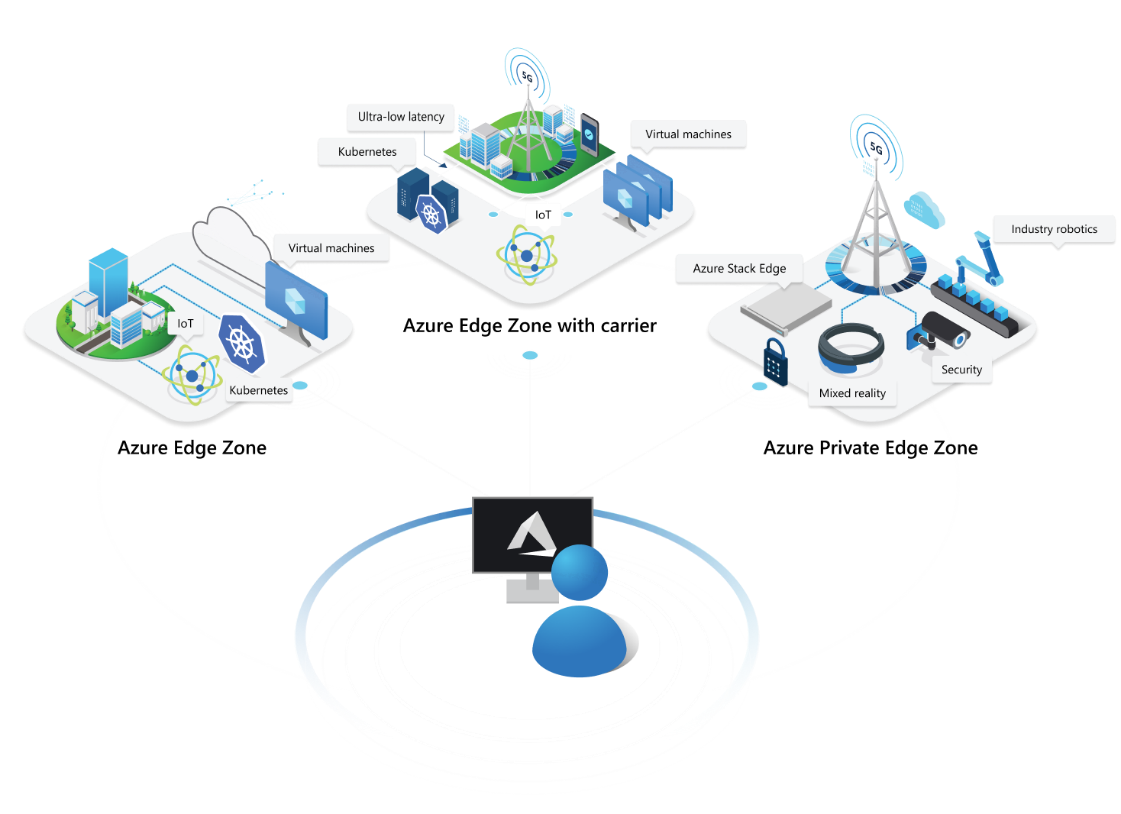 The carrier version of Edge Zones is tightly integrated with both the carrier network the Azure network. That’s what Microsoft has spent the last year testing out with AT&T – which will be the first carrier on the service – to make sure to avoid “tromboning” a mobile connection to another location and back.

“Traditionally, with mobile networking, that [packet] would have gone all over the universe before it got where it was supposed to be going,” Khalidi joked. The degree of integration with their network is up to each carrier, and how fast devices on their networks can reach the edge zone will be part of their differentiation. In time, Azure is planning to let developers take advantage of that to place workloads automatically.

“What you have in the first version is you say, ‘Drop this container in this location.’ In the future, you will see software from us that will do more sophisticated placement of code, and we will work with the carriers to integrate more of their APIs. The carriers have location information, they have latency information, QoS. Ultimately, 5G slicing (using a dedicated portion of network for your traffic) will be integrated in the platform.”

Taking the Azure Experience to the Edge

Not all Azure services will be available in Azure Edge Zones, Khalidi cautioned. “We have hundreds of services that only belong in the big regions. This runs basic containers and basic VMs and basic networking.”

But for those services, the developer experience will be exactly like picking a normal Azure region to deploy a VM or container to in the cloud portal. “In the public cloud they see a pool of VMs, queues, and containers, and ways to do lifecycle management on containers, and to deploy them,” Khalidi said. “They’ll see the same thing on the edge, although not every possible VM SKU will be available at the edge. You can go to the Azure portal and say, ‘I want to be in this edge location. Drop it in LA or North Dakota, or Perth, Australia.’ And for a given carrier, you’ll see it’s in city X by carrier Y. All the IP edge software we have, all the ML, AI, the analytics, all the container-based software just runs as is in those places.”

Microsoft talks about using Edge Zones for the usual advanced low-latency scenarios like mobile gaming (Game Cloud Network has a 5G game called Tap & Field live running on the AT&T and Azure Edge), drone monitoring, smart cities, and real-time analytics. Partners like NetFoundry are focusing on the immediate industrial and retail opportunities like mobile point of sale, factories, and warehouses.

“We also see greenfield interest from sectors like manufacturing, warehouse automation, and connected supply chains because previous options did not meet their requirements for local connectivity and edge processing,” Sarva said.

Azure Private Edge Zones work very differently. They use Microsoft’s existing Azure Stack Edge hardware, which is available in multiple countries from a wide range of OEMs, to connect devices to a private 5G or LTE network for very low-latency local connections.

“They combine local networking like private LTE and CBRS with connectivity back to the cloud through firewalls, and VPNs, and IPsec, and so forth,” Khalidi explained. “We have partnered with SD-WAN vendors to do breakout from there back to the internet without having to go through whatever central location you may have. We have almost every vendor you can think of with the 4G stack and CBRS, and 5G is forthcoming – not just standalone 5G but also exposing the 5G APIs.

“That combination means you can have the most optimal path from your local device in a factory all the way to the public cloud and processing in between that doesn’t need to go to the cloud,” he continued. “You can do local processing, reduce the data, and have a very local, very close loop from a latency perspective, and push the rest to the cloud and do the mega processing upstream.”

A developer could train a machine learning model in Azure to spot when components are correctly placed on a circuit board, for example, or to tell the difference between scratches on a beer bottle and contamination in the beer inside it. They could then deploy the model to an industrial camera connected to a private Azure Stack Edge box for real-time execution, with more analytics options available in the public cloud. 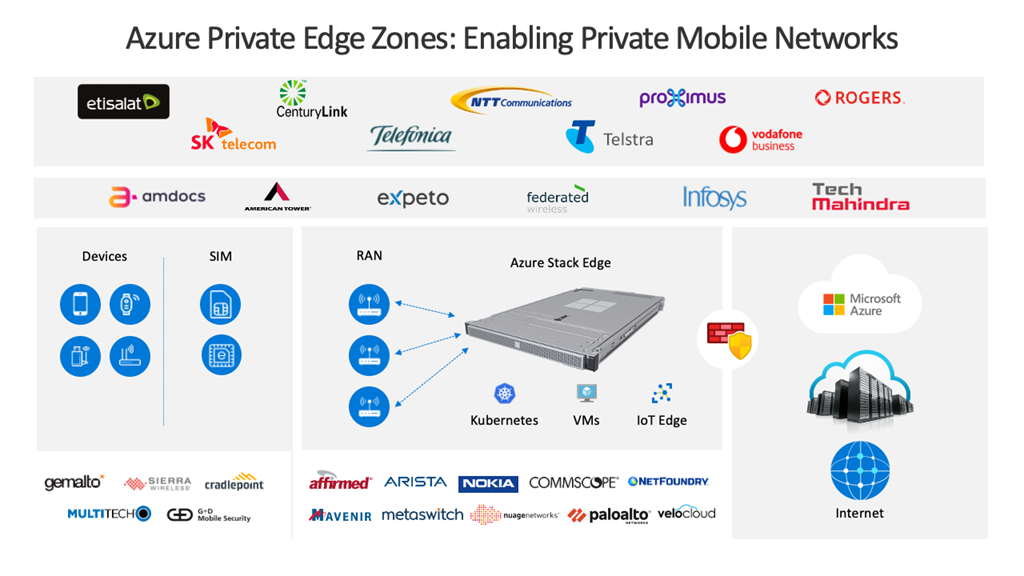 The latency for Azure Private Edge Zones could be sub-millisecond for devices inside a factory or warehouse, according to Khalidi. “With a private 5G or even 4G stack, you can get amazing latency between your device and the box,” he said.

“The more [Edge Zones] there are in a location, the more you have coverage, the closer you can be to the customer,” Khalidi noted. “Between us and our partners we can test the market and see how many zones we need to do this and expand just like we did with Azure regions.”

Azure Edge Zones will be available from June this year, starting in New York City, Los Angeles, and Miami. The first Edge Zones with carrier will be with AT&T in Atlanta, Dallas (the existing test zone), and Los Angeles.

Expanding to other locations beyond ten locations already planned for 2020 will depend on customer demand, Khalidi said, but the rollout can happen very quickly. “We have sophisticated supply chain mechanisms where we can add physical capacity very quickly almost anywhere around the world, and we’re applying the same algorithms and the same predictions [of demand] to this.”

What Microsoft won’t be doing is launching its own connectivity services. “Every Azure customer… reaches Azure through a carrier or an operator. We don't own spectrum or last mile, nor are we going to,” Khalidi said.

Its recent acquisition of Affirmed Networks gives Microsoft a virtualized and containerized Evolved Packet Core service carriers like AT&T already use, but it will also be useful for customers designing their own private 5G networks for Private Edge Zones. “EPC is the heart and soul of any 4G or 5G network; it's basically the packet switching unit, like a virtual switch but for mobile networks,” he explained.

Microsoft will also continue to support alternatives from Nokia, Mavenir, and other partners: “We're going to support anybody else's, just like we do today.” The reason it wants more expertise in mobile networks and spectrum is to better support carriers and operator partners, he said.

Having that kind of ‘operator DNA’ is important, CCS Insight VP for enterprise research Nicholas McQuire told us. It will also help bring the exiting developer ecosystem to 5G development.

“With Affirmed Networks, Microsoft is positioning itself at the heart of the transformation of mobile networks (which are moving from fixed-function hardware to a more agile, cloud-like architecture) and taking steps to ensure Azure remains competitive as more processing and intelligence shifts to the edge,” McQuire said. This new edge infrastructure becomes an extension of the hyperscale cloud.

McQuire said he saw significant industrial interest in private 5G but also hurdles, because operators didn’t have cloud development skills, while industrial firms didn’t have 5G expertise. Microsoft, he suggested, could bridge that gap by giving developers the familiar cloud experience at the edge.

Microsoft has a lot more telcos on board than its two big cloud rivals, but its main differentiators are the tight integration Azure can offer across the stack and the granularity it has at the edge, especially for private network deployments, McQuire indicated. Although it will take some time for the pieces to come together in Azure, in his view, Google and AWS can’t currently match that natively in the cloud.

Besides commercial and industrial Azure Edge Stack appliances that can be used in Edge Zones, Microsoft has Azure Stack Hub for private cloud. That means you can have machine learning capabilities like image recognition running on a closed-loop industrial system, with 5G connectivity to cloud services for analytics, either locally or in hyperscale cloud.

Because AWS and Google offer 5G technology from partners, McQuire suggested, it’s unclear whether they will achieve the same level of integration Microsoft has natively in Azure and match the quality of the products and experience Microsoft can bring to the market.

Developers don’t need to become experts in 5G to get the benefits of cloud scale at 5G speeds, he maintained. “You don't want to worry about setting up the network, and the boxes, and the vLANs, and the firewall. You’ll just be programming using some high-level constructs around containers with some orchestration layer, and you inject policies, and the right things happen. When failures happen (because failures do happen), the code will reconfigure itself and resume from somewhere else. All the stuff we've talked about in distributed computing for many, many years now is possible on a global scale.”