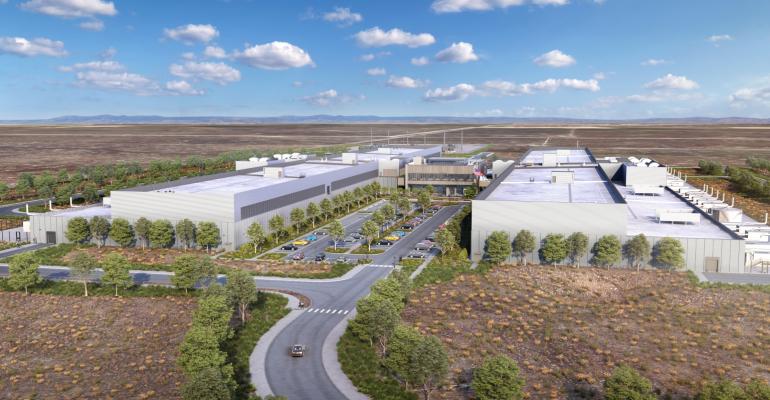 The Kuna Data Center is the first project to take advantage of the state’s new tax breaks – and the first to use Idaho Power’s clean energy tariff.

Meta, the parent company of Facebook, said on Feb. 16 that it is planning to build a data center in Idaho – marking its 19th hyperscale project.

The site is in a 325-acre industrial park in the city of Kuna – population just over 25,000 – located 16 miles from downtown Boise, the state capital. It will be called the Kuna Data Center.

The $800 million campus is designed to offer 960,000 square feet of space. Building is expected to start in September and finish in 2025. The project is expected to create 1,200 temporary jobs during construction and 100 permanent operational jobs when it opens.

Kuna has been courting the data giant for a long time, Joe Stear, the city’s mayor, told Data Center Knowledge in an email. He credited the city’s former director of economic development, Lisa Holland, who died tragically in a car accident in May. “She led them on a path that guided them into things that they never thought possible, such as the building of their own water treatment plant,” he said, noting that project leaders reported “they had never experienced that level of professionalism ever before.”

“It’s been a little over a year in the making,” Stear added. The project was code-named Project Peregrine, because Kuna is home to the Morley Nelson Snake River Birds of Prey National Conservation Area, which houses the largest population of nesting raptors in North America, and a number of Kuna subdivisions and roads are named after raptor species.

The formerly agricultural city, founded more than a century ago, is now largely a bedroom community of Boise, with 90% of the working population commuting to the state capital daily, Stear said. That’s tough on Kuna in several ways. First, residents who commute tend to shop outside of the city. Second, all the commuting creates a lot of traffic, because Kuna has no public transit to speak of. Finally, because the city has so little industry, most of the tax burden falls on homeowners. Stear looks to the Facebook project to help with each of these issues.

City and county officials are expecting the data center to spawn other ancillary businesses, though they weren’t specific. Meta is considered to be the anchor tenant of what the city is calling the East Kuna Industrial area.

In addition, the company is set to contribute to the Kuna community by building a $50 million water and sewer plant that will be run by the city. That will enable the city to support other industry and residential construction.

“This project will have a huge effect on that tax burden balance not only because of its existence, but with the oversizing of the wastewater treatment facility, paid for by [Meta], others will come without having to figure that out,” Stear said. “Obviously, if it exists, the property is more shovel-ready.”

Meta has also pledged to work with the Kuna school system. “I had the opportunity to meet with a representative from Meta,” Wendy Johnson, superintendent of the Kuna School District, reported in her weekly email message to residents. “I was pleased to learn they are eager to partner with schools including helping our students and staff to learn more about the different career paths and jobs.

“This will help us grow and enhance our Career Technical Education programs. They also provide grants to support STEM (Science Technology Engineering and Math) activities. We spoke to a school district where Meta's built a similar facility – they confirmed that they have been supportive partners of schools – and the community.”

What the announcement means for Idaho

Idaho, too, has been courting data centers for some time. While the state offers the same low power rates as other Northwestern data center bastions like Oregon, Washington, and Nevada, it hasn’t seen success on the scale of Prineville, or Storey County.

The business community conjectured it was a tax issue. All the states surrounding Idaho either exempted data center equipment from sales tax or had no sales tax at all. Idaho’s is set at 6%.

Since 2017, the business community – spearheaded at first by the state’s Department of Commerce, and then by its primary utility, Idaho Power – lobbied for data center tax breaks. Other supporters at various points included the Boise Metro Chamber, the Idaho Technology Council, and local data center operators Involta and Fiberpipe, now each owned by out-of-state firms but still operating in Idaho.

After several years of effort, the Idaho Legislature passed such a sales tax exemption bill in 2020. The Kuna Data Center is reportedly the first project to take advantage of it.

The small number of jobs offered by the data center is not a major issue; Idaho’s unemployment rate is among the lowest in the country at 2.4%. In fact, there is some concern that with the tight labor market Kuna and Idaho might not be able to provide all the workers needed, but Meta is hoping to hire locally, Stear said.

Not everyone is happy about the announcement. A number of Idaho residents took to social media – ironically, many of them to Facebook – to express their concerns about the project: that it would add to commute traffic, exacerbate the region’s burgeoning house prices, bring liberals to the ruby-red state, and use too much water.

While 100 permanent jobs won’t make much of a dent in the commuting patterns, it’s a start, officials said. Kuna residents commuting to the site likely wouldn’t use the area’s main highway to Boise.

That said, road enhancements could be possible. The data center is located at the corner of Cole Road and Kuna-Mora Road, and in past years there had been some discussion of turning Kuna-Mora Road into a bypass around Boise. Stear said he had been having discussions with the state and county highway districts “on the feasibility of making big changes,” which he wouldn’t specify.

City and county officials hope this is just the first of several such data centers, with some hinting that others are on the way.

The housing market and the state’s conservative reputation are also unlikely to be affected by 100 new jobs; the five-county Treasure Valley region, the largest in the state, has more than 750,000 residents.

Water consumption is another matter. The area is largely desert, with just 11 inches of rain a year. Stear said Meta would be drilling wells, and hoped to be able to use outside air to cool the site for at least half the year.

“The Kuna Data Center will be at least 80% more water efficient than the average data center. We have a global goal to restore more water than we consume by 2030,” Meta stated on its Facebook page for the project. “In Idaho, we will be investing in water restoration projects in support of our data center.”

In addition, Meta required Idaho Power to be able to provide 100% renewable energy. It will be the first customer to participate in the utility’s proposed Clean Energy Your Way program.

The Clean Energy Your Way proposal, filed with the Idaho Public Utilities Commission (IPUC) in December 2021, requests an expanded suite of options to help Idaho Power customers meet their own clean energy goals, the company stated in a press release. “One component is a construction option, which would allow customers to work with Idaho Power to procure new renewable resources and integrate them into the grid,” the company reported. “This contract would represent the first example of the construction offering, which will be expanded to interested large power service customers upon IPUC approval.”

On December 22, 2021 Idaho Power filed a request with the Idaho Public Utilities Commission seeking approval of a special contract to provide energy service to a potential new, large-load customer, “Brisbie LLC,” a data center of more than 20 megawatts.

Also in December, according to county property transfer records, Brisbie LLC bought several parcels in the area from Gardner Company, a major office and residential developer that owns the private industrial site, according to the Boise business blog BoiseDev.

Following Meta’s announcement, it is clear that Brisbie was a shell company it used to secure the necessary arrangements for the Kuna Data Center.

Other major employers in the area include the Idaho State Correctional Institute and CS Beef Packers. Consequently, it’s unlikely neighbors will be complaining about noise, as has been the case with some other data centers. Because the site is already zoned industrial, public hearing and approval processes won’t be required.