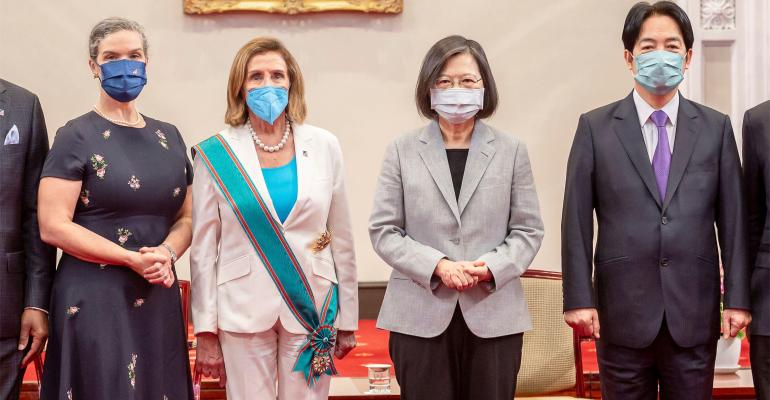 Data center semiconductor chip supply chains have threatened server refresh cycles. House Speaker Nancy Pelosi traveled to Taiwan, and invoked the ire of China, one of the U.S.'s largest trading partners, to prevent this issue from affecting your business.

Countries are rushing to localize manufacturing in order to improve resilience in the wake of recent COVID-related supply challenges but the new capacity will take time to come online, even as Taiwan has already been investing in new foundries. As a result, TrendForce estimates that Taiwan's share of global foundry revenue will grow to 66% by the end of this year.

"The global supply chain for semiconductors and IT equipment is dependent on Taiwan, so there is a risk if we see serious actions from China," said Vladimir Galabov, head of the cloud and data center research practice at Omdia.

During the last major Taiwan crisis, which occurred in the mid-nineties, China lobbed missiles into the sea near Taiwanese ports, he said, disrupting shipping traffic.

"An escalation of the situation in Taiwan would significantly impact the data center market," he said.

From a volume perspective, Intel is the supplier the market is more reliant on today, he added. "However, when it comes to bleeding edge technology and future roadmap, the world is extremely dependent on Taiwan and TSMC specifically."

In particular, the global supply of processors with 5 nanometer and 7 nanometer transistors would be significantly impacted if TSMC were to face export restrictions.

In 1995, the U.S. allowed Lee Teng-hui, then Taiwan's president, to attend an alumni event at his alma mater, Cornell University.  In response, China deployed more than 100,000 troops to  Fujian province, located just across the Taiwan Strait from Taipei and fired missiles into the local waters. One missile flew almost directly over Taipei itself.

And the visit by President Lee Teng-hui was an informal one.

In an official statement, China's Ministry of Foreign Affairs called the visit "a major political provocation."

"Those who play with fire will perish by it," the statement continued.  "China will definitely take all necessary measures to resolutely safeguard its sovereignty and territorial integrity in response to the U.S. Speaker's visit."

China also responded with limited sanctions, including a ban on fish and fruit imports from Taiwan, as well as military drills.

On Wednesday, Taiwan Minister Jaushieh Joseph Wu held a press conference in which he called these military exercises "a gross violation of Taiwan's rights under international law" and said that air and shipping routes have been hindered.

"This has had a serious impact on international transportation and trade," he said.

The drills are a preparation for an invasion, he added.

"China ... is conducting large-scale military exercises and missile launches, as well as cyberattacks, disinformation, and economic coercion, in an attempt to weaken public morale in Taiwan," he said.

Meanwhile, China has canceled several diplomatic meetings scheduled with US government and military representatives, and suspended a number of agreements, including one on cooperation against transnational crimes as well as talks on climate change.

On Thursday, Chinese Foreign Ministry Spokesperson Wang Wenbin held a press conference at which he said that Taiwan is "colluding with external forces" and "will only accelerate their own demise and push Taiwan into an abyss of disaster."

"China’s complete reunification is a process that cannot be halted," he added.

If the situation continues to deteriorate, data center operators will need to prepare for impact.

"Even if we ignore manufacturing innovation, and device type, and assume that the industry can adapt IT equipment design quickly to compensate for shortages, I think it would be foolish to assume that there wouldn’t be an impact to the data center market if Taiwan’s processor supply was to be cut off," said Omdia's Galabov. "A third of the fabrication plants for semiconductors with 22 nanometer and smaller transistors are in Taiwan."

Beyond semiconductors, many of the server manufacturing occurs in Taiwan, as well, he added.

"So we’d see a disruption to actual IT equipment assembly," he said. "Even servers assembled in Europe and the US often depend on motherboards made in Taiwan, so our dependence on the island is significant."

Most affected by any disruption would be fabless semiconductor companies who require bleeding edge technology – particularly NVIDIA and AMD. He also expects hyperscale cloud service providers to be hard hit, particularly those who source their in-house designed semiconductors and their IT equipment from Taiwan.

Oversupply expected in the long term

If the situation in Taiwan does resolve peacefully, however, there will actually be an oversupply of semiconductors in the near future.

The industry will shift into a "prolonged oversupply environment" across various devices types and applications, said Galabov, referring to an Omdia research brief prepared yesterday, propelled by a number of national initiatives to spur local production.

For example, the CHIPS and Science Act provides more than $50 billion in new funding for U.S. semiconductor infrastructure, of which $40 billion is specifically to boost manufacturing capacity.

According to the White House, this investment will bring the U.S. market share of memory chip production from less than 2% to 10% over the next ten years.

Similar incentives are in the works in Europe and elsewhere. The EU is investing $50 billion -- 45 billion Euros -- through 2030.

The new investment won't make an impact for the next two or three years, at least, said Galabov.

That's how long it takes to build a new semiconductor fabrication facility and get it running.

But even before the new production kicks in, the semiconductor industry will experience an oversupplied environment in the next twelve to 24 months, he said.

By that year, the country is forecasted to control 44% of global foundry capacity and around 58% capacity for advanced processes of 16 nanometers and below.