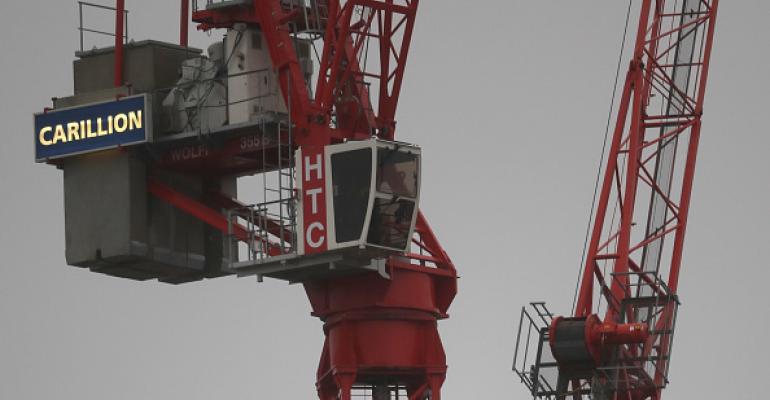 Data centers managed by Carillion and its partners could be affected after the UK-based construction and facilities management company went into liquidation.

UK government and financial services data centers could be impacted by the collapse this week of the troubled UK construction and facilities services company Carillion.

Carillion, the second biggest construction services company in the UK, went into compulsory liquidation on Monday, 15 January, following a period of financial difficulties. The company reportedly amassed debts of more than £1.5 billion.

Its demise has caused a lot of political fallout in the UK, as it held a large number of strategic government contracts, some of which were awarded despite existing concerns about the company’s financial position.

While Carillion doesn’t specialize in data center facilities management (FM) to the same degree as rivals, such as CBRE and JLL, some of its contracts include clients’ data centers alongside generalist buildings and other infrastructure.

In late 2016 Carillion issued a statement saying it had renewed an ongoing contract – of more than eight years – with the UK financial services company Nationwide.  The new seven-year contract, valued at more than £350 million, included managing the company’s data centers.

Carillion said at the time:

Under this new contract, Carillion is providing a wide range of hard and soft facilities management and workplace services for Nationwide’s Headquarters in Swindon, its 15 corporate offices, critical data centers and 700 retail branches throughout the UK.

Following the news of the collapse, Nationwide indicated that it would look to directly employ some of the Carillion FM services contractors.

Data center FM services can be broadly defined as outsourcing the management of a facility's physical infrastructure -- including power and cooling equipment -- as well as other softer services, such as security staff and cleaning. Some providers also manage basic IT hardware maintenance, including server and networking equipment.

Commenting on the demise of Carillion, one insider from a large FM services rival suggested some government data centers could be affected. “Carillion collapsing could represent a significant threat to public sector data center operations but probably little impact on private or colo data centers,” the source said. “They don’t have a data center-specific business or a particular specialization in data centers, but they probably do have quite a few data centers under management as part of larger FM deals, particularly within the public sector.”

James Wilman, chief executive of UK data center engineering services specialist Future-tech, said Carillion had been difficult to deal with due to its size. “The only thing I would say about my dealing with Carillion is the old adage ‘too big to fail,’ in my experience it should be ‘too big to function,’” he said. “We see it time and again with these very large organizations: they almost become dysfunctional with regard to their ability to respond and react to change.”

Data center FM services contracts can range in the millions of dollars for medium to large data centers and other buildings. However, the majority of FM services contracts are relatively low-margin. Services are delivered by on-site staff, and customers are often reluctant to pay more than market rate, even if staff are highly trained and managed by a third party.

The market for data center FM services is highly fragmented and regionalized. There are a handful of large engineering and property services companies, which dominate in key markets (Western Europe, North America, parts of Asia). These are the likes of CBRE, JLL, Cushman & Wakefield, ISS, and Schneider Electric.

Recently, a number of colocation providers, including T5 and QTS, have begun to offer FM services outside of their own facilities as a way to eventually onboard new colo clients.