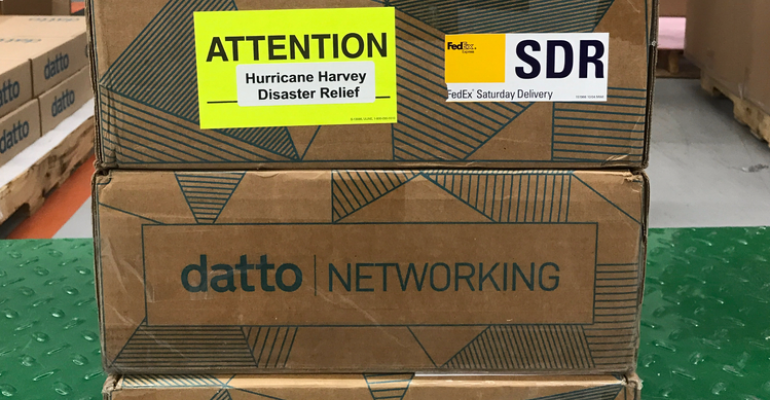 After the group’s first trial by fire in the Texas Gulf Coast, Datto officials offered some takeaways from Harvey that could inform IT services firms in Florida as they confront Hurricane Irma.

Before the destructive winds of Hurricane Irma were even a light breeze in Miami Beach, Datto’s newly minted Disaster Response Team was stuffing a van with networking and business continuity gear.

They set off for Florida this past Friday.

The four-person units – supported by hundreds behind the scenes – were charged with driving into hard hit areas to provide partners with the tools and support to get their businesses up and running again.

Norwalk, Conn.-based Datto played an active role in helping nearby organizations recover after Hurricane Sandy battered the northeast, but not until Hurricane Harvey had the team actually deployed to a remote disaster.

“We were active for Sandy because it was in our backyard,” said Matt Richards, vice president of product marketing at Datto. “This is the first time that we’ve been able to assemble a team, send it over a geographic distance and take the networking equipment. This is the first time we’ve fielded the Disaster Response Team.”

Each member of the team stays in the disaster zone for up to a week before rotating out and being replaced by another employee.

After overseeing the group’s first trial by fire in the Texas Gulf Coast, Richards offered some takeaways from Harvey that could inform IT services firms in Florida as they confront Irma and its aftermath.

1. Business continuity won’t be the priority on Day 1

Datto’s disaster recovery team was on the ground in Texas before Harvey hit, helping managed services providers (MSPs) to protect their data and confirm the integrity of offsite backup.

“What we found is that the week before, it’s about business continuity and preservation of data,” Richards said.

But once the storm hits and passes, there’s an eerie period during which all attention rightly turns to basic survival.

“The recovery of a city like Houston – and now Florida – it takes time,” Richards said. “There’s this hole where we’re prepared to help MSPs but the core focus is on preservation of life and property.”

After the initial shock of the disaster wears off – in Harvey that took about a day or two – organizations and individuals are anxious to get online.

From MSPs, to insurance companies, to disaster relief shelters, everyone scrambled for network connectivity.

That stoked demand for Datto’s Data Networking Appliance, which the company released early this year.

The hardware, which looks like a router, enables users to connect to the Internet from any location with electrical power and a 4G LTE signal.

Datto’s Disaster Response Team traveled the region in a Chevy Suburban and cargo van, passing out the devices to partners and other businesses, and even setting them up at shelters to provide free WiFi to volunteers and storm victims.

Organizations were asked to send the units back to Datto once the need subsides.

Demand for connectivity was so acute that the team needed additional shipments of the DNAs, resupplying twice.

“I didn’t realize how important network connectivity was,” Richards said. “If your servers are running but you can’t connect to a network, it probably isn’t helping you.”

Once people were able to connect to networks, there came a rush of organizations bringing their systems back online.

Many Datto customers used the company’s Business Continuity and Disaster Recovery appliance to back their servers up to the device, which then also backs up to Datto’s cloud.

“Once connectivity was established, we started getting more calls from people to restore from those appliances or from our cloud,” Richards said. “Maybe preemptively they had pushed the workload from the local server to our cloud. So they wanted help bringing those back to the local servers.”

After Hurricane Sandy, some businesses needed weeks to recover and continued to run workloads on Datto’s cloud, at no additional cost.

“We had folks running there for 30 days or longer,” Richards said.

The aftermath of Hurricane Harvey offered stark illustration of just how isolated organizations within the disaster area can be from the outside world.

Roads were washed out.

Most modes of transportation were shut down or heavily curtailed.

“That means that, as a customer, having the team locally had a huge impact – particularly in the first two weeks,” Richards said.

Datto’s Disaster Response Team was able to physically travel within the disaster area, contacting partners face-to-face to deliver hardware or provide other support.

“Response time matters,” Richards said. “If they can’t get to you or you can’t get to them, they’re stuck until FedEx can deliver to them.”

By far the biggest takeaway from Hurricane Harvey, Richards said, is that fortune favors the MSP that is well prepared for disaster recovery.

But on the eve of Irma’s landfall, the time for preparation has largely passed.