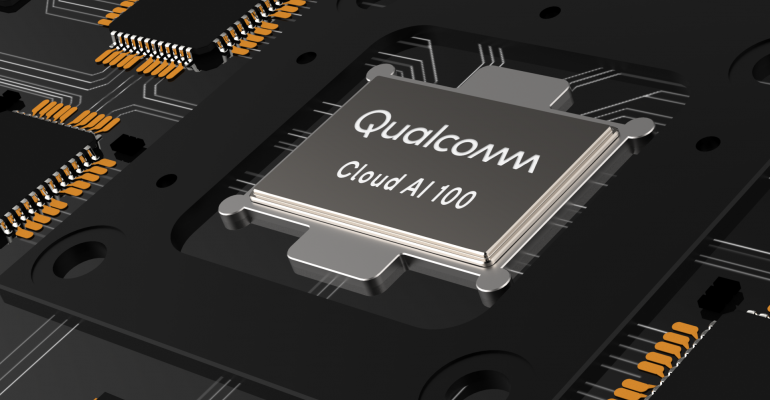 The plan is to leverage its mobile expertise to break into the market expected to reach $17 billion by 2025.

Ian King (Bloomberg) -- Qualcomm Inc., whose technology dominates in smartphones, said it’s going to offer a new chip for use in data centers that will help accelerate artificial intelligence processing, joining a crowded race to provide the fundamental building blocks of new forms of computing.

The company will use its mobile expertise, and ability to design chips made with the latest manufacturing technology, to start supplying the new products that will compete in a market worth $17 billion by 2025, Keith Kressin, a Qualcomm executive, said at a company event Tuesday in San Francisco. Their key attribute will be power efficiency, he said.

Qualcomm, whose growth has stalled amid a slowing smartphone market, increasing competition and legal battles that threaten its technology licensing business. In response, the company is seeking new markets to try to reverse that. The business of recognizing images, speech and making data-based decisions by computers is expanding rapidly and stretching the capabilities of the type of chips that have dominated since the birth of the personal computer in the early 1980s.

Semiconductor companies are scrambling to either optimize traditional types of chips or offer completely new approaches to companies such as Alphabet Inc.’s Google, Amazon.com Inc.’s AWS and Facebook Inc. In turn, these cloud-computing providers are increasingly moving toward designing their own components.

Facebook’s computers currently make 200 trillion predictions daily, Joe Spisak, a product manager at the social media company said at the Qualcomm event. That increasing workload makes it difficult to keep up with the growing demands of supplying data centers with power, a need that doubles annually and is unsustainable, he said.

Such testimonies highlight the urgency for new solutions, which hasn’t been missed by Qualcomm’s competitors. Intel Corp., whose processors are pervasive in data centers, has bought smaller companies that make different types of chips with attributes helpful in handling work for AI accelerators. It’s also adding capabilities to its processors to try to make them more efficient and better at making sense of the increasing flood of data created by phones and machines. Qualcomm is also playing catch up with Nvidia Corp. which has built a multibillion-dollar annual business adapting its graphics chips for data-center use.

Kressin said Qualcomm will provide more details of its new product, called the Cloud A1 100, later this year. The chip is aimed at inferencing work – making decisions based on analysis of data streams such as digitized voice or images. More than just a repurposed mobile phone processor, he said, it’s more than 50 times as powerful in processing AI workloads as the company’s flagship mobile chip. The new offering will be in production in 2020, he said.