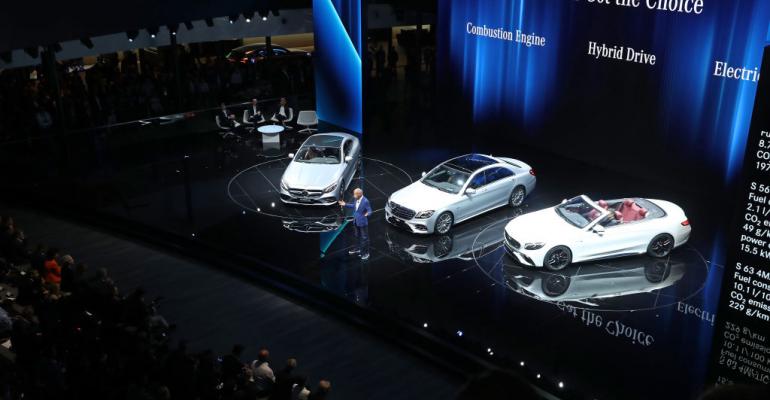 Engineers at the Silicon Valley office of Mercedes-Benz made 24,000 car trips to collect user-behavior data and spent 18,000 hours of Nvidia Titan X GPU processing time to create simulations and select the best machine learning model that would run in the company’s latest cars to predict where its drivers want to go.

“Every time you get behind the wheel, the car will know where you’re going,” was how Kal Mos, who manages the company’s office in the Valley, described the team’s objective. Mos, a Mercedes-Benz VP, spoke about the company’s artificial intelligence work at the AI Summit in San Francisco Wednesday.

While automakers’ efforts to design AI systems for self-driving cars get most of the attention, the German company also uses AI to enhance user experience behind the wheel. Mercedes-Benz is also working on AI-powered self-driving cars, Mos said but did not reveal much else about those efforts.

The engineers built and fine-tuned the machine learning model for predicting where drivers want to go in a data center, but actual training of the model takes place in the car itself. “The model trains itself in the field, at the edge,” he said.

The current, first-generation AI systems in Mercedes cars don’t send the data they collect to the cloud because of privacy concerns. But the engineers would like next-generation cars to start sharing data, Mos said, although customers would control how their data gets used.

In designing their destination-prediction AI, Mos and his team’s goal was to make sure that whatever they create is better than what already exists. Other mapping applications suggest destinations based on previous behavior, but they are typically rather crude.

For example, he said, if you’re driving to work on Monday morning, a suggestion to go to the beach, where you’d been Sunday, doesn’t make much sense; so the system learns the driver’s habits over time to make better suggestions.

Already thinking about next-generation AI functionality for improving driver experience, the team has started experimenting with analyzing how drivers move around inside the car (how they move their hands, for example) and collecting environmental-sensor data.

“Environmental sensors are extremely critical to the way you drive and to the destination you’re going to,” Mos said. “The car is in the field, and environmental information around the car has a great impact on what you’re going to do inside the car.”

Also under consideration is using social media to improve destination suggestions. At lunchtime, for example, a future-generation car may make restaurant suggestions based on what the driver and/or a passenger have shared on social media, he said.