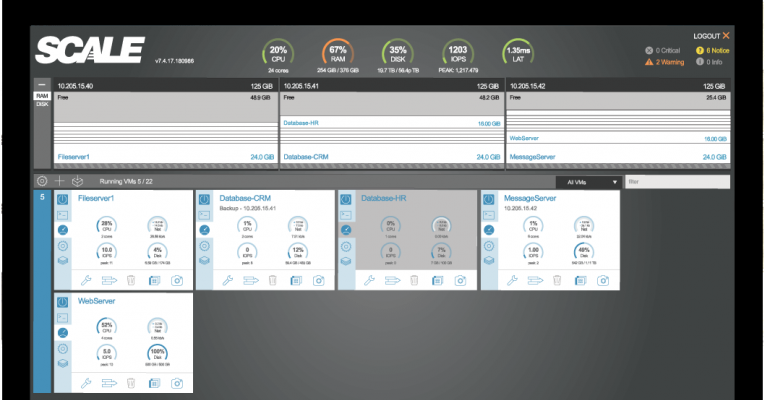 Lenovo has become one of the largest stakeholders in the hyperconverged infrastructure company Scale Computing • The Chinese hardware vendor led Scale’s latest $34.8 million funding round • Together, the partners are going after small and mid-size businesses that need computing capacity in many remote locations but have limited IT resources

Lenovo has become one of the largest stakeholders in Scale Computing, a hyperconverged infrastructure player that’s been focusing on small and mid-size businesses with limited IT resources.

Scale and Lenovo have been partners since last year and have already closed several deals with big customers who bought Scale’s HC3 software on Lenovo hardware.

Scale’s HC3 platform supports hardware by other vendors, such as Dell EMC, Hewlett Packard Enterprise, and Super Micro Computer. That support will continue, but going forward, if you want the best-performing hardware for HC3, it’ll have to be Lenovo, Scale’s chief revenue officer Dave Hallmen indicated in an interview with Data Center Knowledge.

“We’re clearly going to be incorporating much more Lenovo hardware design into our appliance agenda,” he said. “We will continue to support additional hardware vendors, but this new partnership brings in a whole new focus on Lenovo.”

That appliance agenda includes next-generation Lenovo hardware that will have much smaller footprint. The upcoming “mini-server” will be one-third of the width and one-third of the depth of a standard rack server and will not need server fans. The current solution fills up less than half of a 12U cabinet. The mini-server-based appliances will come with a “bookshelf-like rack.”

Lenovo led the $34.8 million funding round Scale recently closed. The companies didn’t disclose the size of Lenovo’s investment, but according to Hallmen, the hardware maker is now one of four largest stakeholders in the company, along with ABS Capital Partners, Benchmark, and Allos Ventures.

Together, Lenovo and Scale are going after companies that need computing infrastructure in locations remote from their headquarters or core data centers. A particular focus are companies with lots of such locations, such as retailers.

One big joint deal the partners have closed together is with Ahold Delhaize, a Dutch-based retailer with close to 7,000 stores in Europe and the US. The retailer has standardized on H3C on top of Lenovo in Belgium, Hallmen said. The initial 300-store rollout of the technology is about half complete, and he expects the customer to deploy across other parts of its European footprint.

Another joint retail customer is Jerry Enterprises, which operates 50 stores in the US. The Scale-Lenovo solution is now in pilot implementation phase at Jerry, Hallmen said.

These customers run the typical software workloads you would expect retailers to run on the hyperconverged infrastructure in their stores. Those include point-of-sale systems, inventory management, video surveillance, and HVAC control, he explained.

Essentially, any workloads that aren’t practical to run in the cloud – be it for latency, security, or other reasons – run at locations that represent the edge of customers’ corporate networks.

Scale’s core focus has been edge computing for small and medium-size businesses that don’t have a lot of IT resources but need compute infrastructure. These customers need simple-to-use software on lower-cost hardware (which is where Lenovo comes in).

Unlike the biggest players in the hyperconverged infrastructure market – the likes of Nutanix and increasingly VMware, HPE, and Dell – Scale doesn’t go after customers looking for hyperconvergence inside large enterprise data centers.

That’s not to say the other vendors aren’t going after the edge market Scale is in. The company always finds itself being considered along with Dell, VMware, Nutanix, and HPE’s hyperconvergence unit SimpliVity by prospective customers, Hallmen said.